Chris Uhlmann, fresh at Nine, is getting plenty of attention for his fill-in job at the commercial network's breakfast program, Today.

Uhlmann’s light-weight hosting gig. Chris Uhlmann, still fresh at Nine from his role as the ABC’s political editor, is getting plenty of attention for his fill-in job at the commercial network’s breakfast program, Today. The light-weight programs have included a segment about “couch-ercise”. His former ABC colleague and now-breakfast TV rival Michael Rowland is one of many taking to social media to troll Uhlmann over the incredible change of pace. 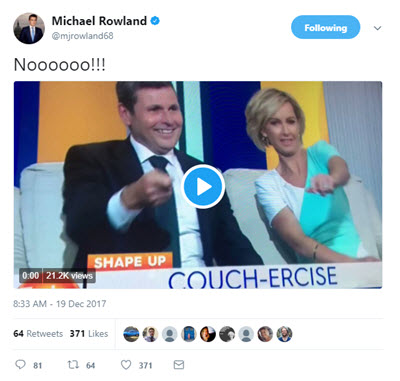 Foxtel owners clash over Sky News fee. Foxtel’s merger with Fox Sports could be at risk as its owners clash over the fee for Sky News — full owned by News Corp. News Corp and Telstra currently own half each of Foxtel, but Telstra’s ownership was set to be reduced to 35% after a merger was given the greenlight by the ACCC. Mumbrella reports that the Sky News deal expires in a little over a week, and News Corp wants a big jump in the fee Foxtel pays for the channel — something Telstra has blocked:

“Foxtel’s owners News Corp and Telstra are locked in an 11th-hour standoff over carriage fees for Sky News, in a row which may scupper plans to merge Fox Sports and Foxtel ahead of an ASX float … With just 11 days remaining until the current deal for Sky News expires, a failure to agree a new arrangement might eventually see the channel go dark. But more significantly, the issue could also stall the planned Fox Sports-Foxtel merger.”

Tele’s homosexual teens graphic ‘unhealthy’. A Daily Telegraph article and graphic that connected same-sex attraction to young people being unhealthy breached the Australian Press Council’s standards, it has found. The article ran under the headline, “FAT CHANCE OF BEING HEALTHY: Young Aussies have only themselves to blame”, and included a graphic listing statistics to do with young people’s health, including how many identified as being attracted to the same sex. The council found that the article and graphic breached its standards that require information to be factual and accurate, that require corrections or remedial actions and that require publications not cause substantial distress: “The council concludes that the reference to ill health and blame in the headlines, with the statistic about same-sex attraction displayed among factors such as obesity and drug use, suggested same-sex attraction is unhealthy and blameworthy.” The Tele told the council the graphic had been produced independently of the journalist who wrote the article right before the print deadline, and they would not put the statistics with that story again.

Vale Jesse Cox. Journalist Jesse Cox has died just weeks after winning his first Walkley Award. Tributes on social media have been posted to the former Radio National producer, who worked on the network’s Trace, which won the award for innovation at last month’s ceremony. 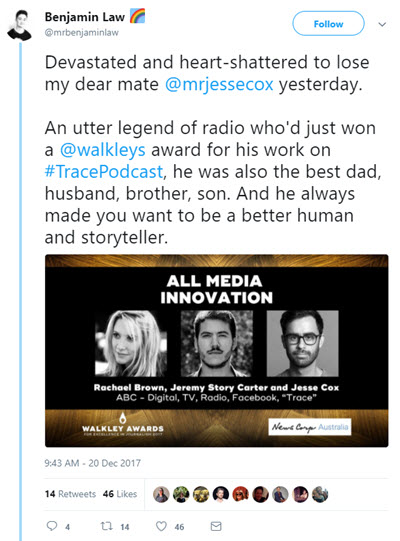