Iranian cartoonist Ali Dorani has finally been able to leave Manus Island. Plus, other media tidbits of the day.

Eaten Fish finds new home. Iranian cartoonist Ali Dorani, who works under the name Eaten Fish, has found a new home after four years on Manus Island in immigration detention. Dorani, who won the Cartoonist Rights Network International award for courage last year, took the pen name of Eaten Fish after he arrived at Christmas Island in 2013. His cartoons have been published in online media and the International Cities of Refuge Network (ICRN) yesterday announced he had found refuge in a safe city. In a statement published by ICRN, he said: “I have left PNG. It was a long journey but I am safe now. I am thinking about my friends in Manus Island and Port Moresby. Thank you to my supporters and people who worked to make this journey happen.”

Betting ad ban watered down. Australian TV and radio industry bodies are trying to find a way around the government’s betting ad restrictions, announced earlier this year. In draft industry codes, broadcasters will be trying to gain exemptions from the ban, which will prohibits all gambling promotion during live sports broadcasts between 5am and 8.30pm. The Sydney Morning Herald reports that betting companies are among those who have written submission objected to watering down the ban.

Book Club‘s last show. The Book Club will air for the final time tonight on the ABC. The program has been running for 11 years with host Jennifer Byrne, but the ABC announced it was ending earlier this year. Panellist Jason Steger has been tweeting about the last program, including a picture of the set being dismantled. The program airs at 8.30pm. 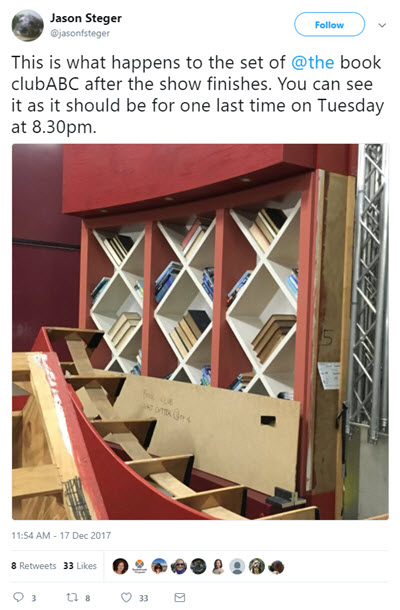 Murdoch: ‘harassment claims are nonsense’. Former Fox News host Tamara Holder, who received a financial settlement with the company after disclosing sexual misconduct, has broken her silence and said Rupert Murdoch is “a liar or he’s delusional and old and needs to get out”. Holder was responding to comments by Murdoch last week on sexual harassment claims against Fox News and its staffers. In an interview with his partly-owned Sky in the UK, Murdoch said most of the claims was “all nonsense”, saying former CEO Roger Ailes, who died this year, was the only Fox News figure implicated.

He forgot Bill O’Reilly and the US$13 million of settlements against him that The New York Times, and then the US$32 million settlement reported in October. He also forgot the high profile complainant in former Fox News star host, Megyn Kelly who complained about the antics of Roger Ailes. Roger Ailes was reportedly paid US$40 million to leave Fox, while O’Reilly was reportedly paid one year’s payment of his yearly contract fee of US$25 million.

21st Century Fox had to weigh in after Murdoch’s comments provoked an outcry: “Rupert never characterised the sexual harassment matters at Fox News as ‘nonsense’. Rather, he responded negatively to the suggestion that sexual harassment issues were an obstacle to the company’s bid for the rest of Sky … Rupert values all of the hard-working colleagues at Fox News, and will continue to address these matters to ensure Fox News maintains its commitment to having a work environment based on the values of trust and respect.” — Glenn Dyer

Fairfax loses NZ merger appeal. Bad luck for Fairfax Media in the Kiwi courts after it lost an appeal against the regulator’s decision to reject its merger with rival publisher, NZME.

If Fairfax wants to get its hands on AUD$53 million in cash and push the weakly-performing newspaper assets off its balance sheet, it will now have to take its appeal to the NZ Court of appeal. The full reasons for the decision were not been released, but a two page statement from the court contains enough detail to explain the strong rejection of the appeal.

The appeal from Fairfax and NZME was based mostly on a legal point of whether the commission had the authority to consider non-economic detriments that might arise from the merger.

Justice Robert Dobson’s ruling affirmed that the commission did have that authority, once it had identified a risk that the merger might substantially lessen competition.

The court did give Fairfax and NZME a couple of bones in the decision — Justice Robert Dobson said the court did not find there was a likelihood of a substantial lessening of competition in the Sunday newspaper advertising market. He also dismissed the commission’s contention that the media companies might introduce a paywall for online news if they were allowed to merge. — Glenn Dyer