Caroline Marcus was forced to walkback claims about Channel Nine's culpability in the Ben McCormack case. Plus other media tid bits for the day.

Marcus in a muddle. Sky News reporter and presenter Caroline Marcus has had to give an on-air apology after she suggested that Nine management knew and covered up former A Current Affair reporter Ben McCormack’s attraction to young boys. Marcus, who had worked with McCormack at ACA, has spoken a number of times about the bullying complaint she laid against McCormack when they were colleagues, but on Peta Credlin’s Sky show two weeks ago, Marcus said McCormack had made sexually suggestive comments about young boys in the newsroom, which had been ignored. She said it was “well-known” that McCormack was attracted to young boys and that there was a “shield of protection around him”. On Friday, she was back on Credlin’s show to apologise:

“Some viewers may have understood us to be saying that people who worked with Ben McCormack and Nine and the management of the Nine network and in particular the national news and current affairs director knew of and covered up or turned a blind eye to the pedophile conduct of Ben McCormack. Neither Sky News or I intended to suggest that was the case and apologise for any hurt or embarrassment caused by our discussion.”

Cocaine Cassie’s wedding. Celebrity agent Max Markson is reportedly representing Cocaine Cassie Sainsbury and her fiance Scott Broadbridge as they prepare to marry in the Colombian prison Sainsbury currently calls home. The Advertiser reported over the weekend that the couple planned to marry, and quoted Markson saying that he expected a “who’s who” of Australian designers to be vying to design the wedding dress for next year’s “traditional” ceremony.

Married at First Sight‘s cynical promo campaign. Promos for Nine’s hit reality TV show Married at First Sight have been on heavy rotation on TV and social media channels, but one version is particularly tone deaf. The show puts couples together, who get married without ever having met, and then follows them as newlyweds, as they get to know one another. But the casting and promotion of one of the stars is a bit off. In one of the ads, cast member Dean is speaking to camera, saying Australia has lost the traditional roles of man and wife, including that he wants to be “obeyed” in marriage. 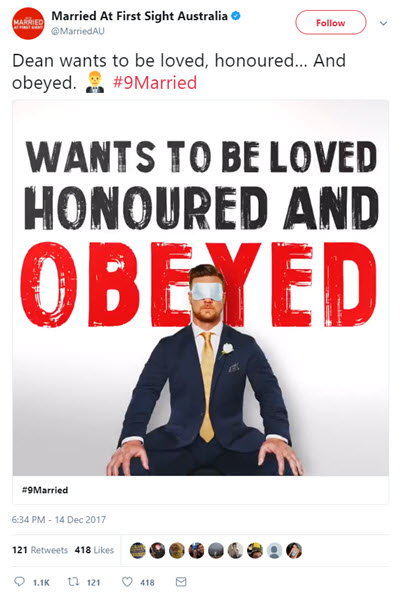 You don’t expect these shows to be progressive, but publicising a bloke who thinks men are too “whipped by their women” just weeks after former Nine star Don Burke has been accused of repeated harassment and abuse in the workplace is pretty off.

Nine dumps newsreaders. Nine has dumped its news presenters in Perth in a shock shake-up. Colleagues found out on Friday that Emmy Kubainski and Tim McMillan wouldn’t be back on-air next year in an email to staff: “This is difficult news to pass on, but I want to let you know that Nine Perth is making changes to the News team as part of a broader change of direction for our bulletin in 2018”. PerthNow reports that McMillan’s contract wasn’t renewed because of a disagreement over his salary. Nine is yet to announce the new line-up.

This Australian has spent seven years in a foreign jail without trial. Why?