Australia reacts to the royal commission

The final report of the Royal Commission into Institutional Responses to Child Sexual Abuse will be made public today. Here's how the media is covering it.

The final report of the Royal Commission into Institutional Responses to Child Sexual Abuse will be made public today, after four years of hearings.

The Newcastle Herald‘s Joanne McCarthy was instrumental in pushing for the commission. She won the Gold Walkley in 2013 for her reporting — which at that time already spanned seven years — on child sexual abuse in the Hunter-Maitland diocese of the Catholic Church. She used her reports to repeatedly push for a royal commission. Today the Herald has marked the final report’s release on its front page: 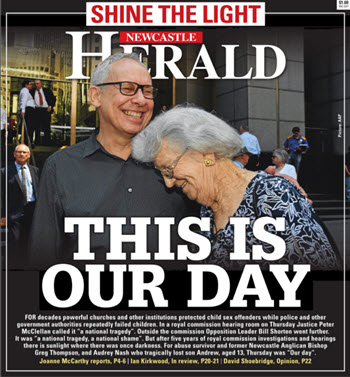 The Newcastle Herald‘s city stablemate The Sydney Morning Herald also ran with the commission on its front page today, focussing on the standing ovation at the end of yesterday’s final hearing. 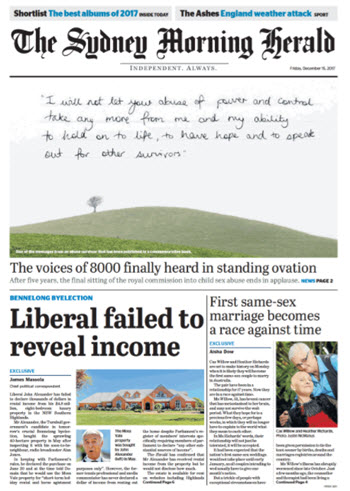 The Age and The Sydney Morning Herald’s federal editor Bevan Shields marked McCarthy’s contribution by tweeting a copy of the letter former Prime Minister Julia Gillard — who ordered the Royal Commission — sent to McCarthy before she left office. 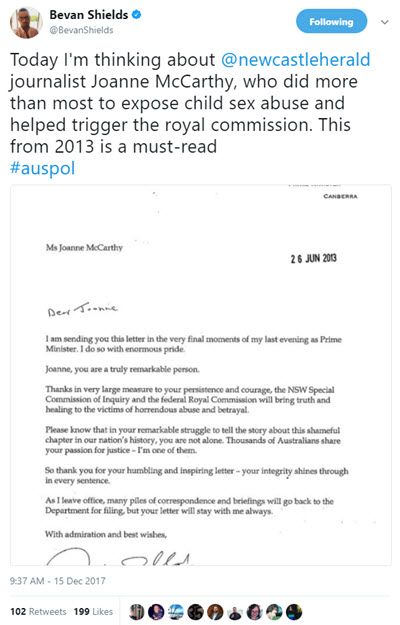 The ABC’s 7.30 had special coverage of the royal commission on its program last night. Gillard spoke to the journalist Paul Kennedy about the royal commission she ordered in 2012, saying that while she initially had doubts about whether the inquiry could cause more harm than good to victims, she now believes Australian children are now safer because of it. 7.30 host Matt Wordsworth hosted an in-studio panel discussion with four people who’d played a role in pushing for the royal commission. And journalist Anne Connolly reported on the commission’s final day, which she spent with the former Anglican bishop of Newcastle, Greg Thompson.

Earlier this week, Kennedy’s documentary Undeniable aired on the ABC, which profiled some of the individuals who’d taken on the institutions involved to push for the commission.

The report will be handed today to Governor-General Peter Cosgrove in Canberra: 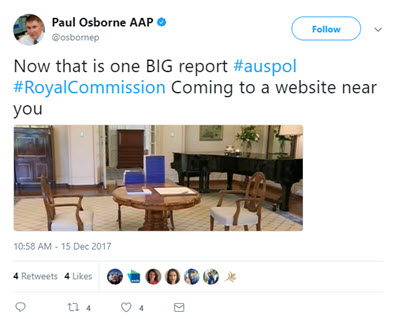 As an ordinary citizen who never lived in care, was never abused by any member of an institution or by my family and who does not belong to any religious organisation, I would like to express my gratitude to former PM Gillard and to the Royal Commissioners and Commission staff for undertaking their difficult and painstaking work with integrity, compassion and dedication.

In addition I would like to thank those journalists, such as Joanne McCarthy, David Marr and Louise Milligan, for their diligence in reporting the Royal Commission’s activities, including the careful re-telling of some of the truly awful stories told to the Commission by survivors of abuse.

The RC has been a scarifying experience and politicians at state and federal levels who do not commit quickly to implementing the Commission’s recommendations can expect to receive sustained opprobrium.

Your last point about scarifying the usual suspects but what is needing is excoriating – removing the very core of this corruption.
As the current showbiz skandal shows, it’s about power, of one person over, many, others.
This deference is systemic but not intrinsic, it is learned/thought behaviour.

… that was meant to be learned/taught behaviour but, stet.

Its done and dusted the exposure of the child victims of pederasty and pedophilia in the past. The is inactivity of the institutions is and was the problem. Now that this is exposed what are the prophylactic solutions?

One bone of contention – this could have been in half the time with half the budget – these Royal Commissions seem to be immune to budgetary discipline unlike every undertaking in society. Now there will be a few barristers knocking on Centrelinks doors unless another Royal Commission is around the corner. Expert reviews can achieve the same result with half the cost if given the same time and money.

I am in agreement with the Irishman that spoke about “results” of the commission in Ireland. NIL

It was nice to see Turnbull praising those who came forward to tell their stories to the RC but disappointing that he didn’t acknowledge Gillard for calling it in the first place (see http://www.abc.net.au/news/2017-12-15/turnbull-says-royal-commission-exposed-a-national/9262514)
I have often wondered whether her successors would have had the courage to do so.