Sky News' Samantha Maiden and Bennelong candidate and former Sky presenter Kristina Keneally have faced off in a fiery interview on the network. 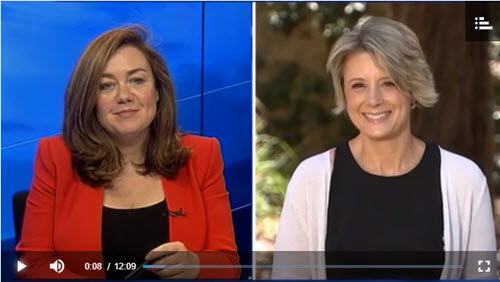 Maiden said yesterday afternoon on Sky News that it was a good interview because she and Keneally respected each other, and it was an “interview of equals”.

This morning investigative journalist and author of He Who Must Be Obeid Kate McClymont has weighed in on part of the interview after Keneally said a section quoted by Maiden had been pulped and wasn’t in the available edition of the book. 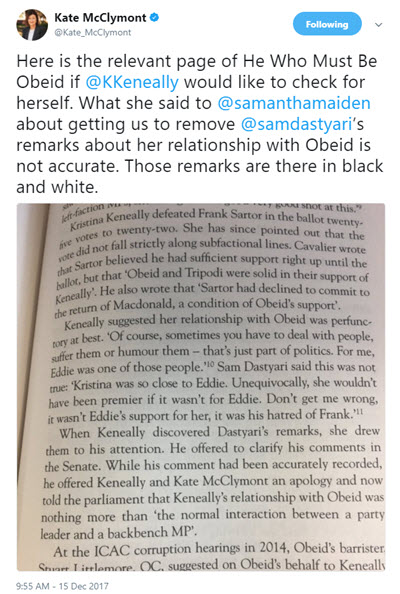 Grammar Nazis. HuffPost has obtained and published the style guide for The Daily Stormer, an American neo-Nazi news and commentary website. The guide, known as the Andrew Anglin style guide, after the troll who runs the website, is a set of directives for anyone writing under Anglin’s name for the site.

Fernandez on the rise. The ABC’s Jeremy Fernandez is going to be on the TV even more often next year, hosting a new 10.30pm weekday news bulletin, as well as presenting the NSW 7pm news bulletin on Fridays and Saturdays. Fernandez has been increasingly prominent on ABC TV this year — he presented the New Year’s Eve broadcast, the Australian of the Year ceremony, has filled in on Q&A, presented Lateline as well as the NSW 7pm news and the ABC News channel.

Journalists arrested in Myanmar. Two Reuters journalists have been arrested in Myanmar while covering a military crackdown on the minority Rohingya Muslim population. The journalists were working for the international wire service, and the Myanmar government has said they will face charges under the British colonial Official Secrets Act. A statement from the Ministry of Information on its Facebook page said they “illegally acquired information with the intention to share it with foreign media”. Reuters president and editor-in-chief Stephen J Adler said the reporters, Wa Lone and Kyaw Soe Oo, were covering events of global significance. “We are outraged by this blatant attack on press freedom. We call for authorities to release them immediately,” he said.

Poll: No one’s heard of word of the year. After the Australian National Dictionary Centre named “kwaussie” as its word of the year last week. We hadn’t heard of it, and now a poll out from PR agency Fifty Acres and YouGov has confirmed that we weren’t alone. The agency surveyed 1031 people, and 70% of them hadn’t heard of the word. The centre said it picked the portmanteau of “Aussie” and “Kiwi” because of the dual citizenship saga in politics this year, and that it had mainly been seen on social media.

Glenn Dyer’s TV ratings. The first day of the third Ashes Test from Perth dominated, helped by the three-hour time difference, so an easy win to Nine for the night and until the test ends. The third session was the most watched program with 1.33 million national viewers (942,000 metro and 391,000 in the regions). Session two had 944,000 national viewers and session one had 763,000.

But that didn’t necessarily mean viewers weren’t bored with the main channel offerings — the combined share of the digital channels was a solid 31.4% last night. For many viewers the cricket wasn’t an option.

And that’s it from me for 2017. Have a great Christmas and a safe and enjoyable 2018. Lots of pud, panettone, plonk and family and friends. And I hope you have been a little naughtier than nice. Don’t worry, because of global warming, coal is no longer the punishment present for the naughties among us. It’s hot air — you-know-who now hands out the wit and wisdom of Tony, Malcolm and Bill — Zingers ‘R’ Us! — read the rest on the Crikey website

“It’s Bennelong year but it’s Keneally over” (female commentator on RN this morning).

It was Alice Workman, to give her her due.