An unauthorised biography of billionaire James Packer by Australian Financial Review journalist Aaron Patrick has been put on ice because of legal threats.

Legal action puts pin in Packer biography. An unauthorised biography of billionaire James Packer by Australian Financial Review journalist Aaron Patrick has been put on ice because of legal threats. Patrick tweeted this morning that the book was on “indefinite hold” because of threats of legal action by Packer. He was responded to a story in The Sydney Morning Herald about the two competing biographies about Packer that were due out — one by Patrick and the other by a journalist at The Australian, owned by News Corp whose co-chairman is Lachlan Murdoch, a friend of Packer. 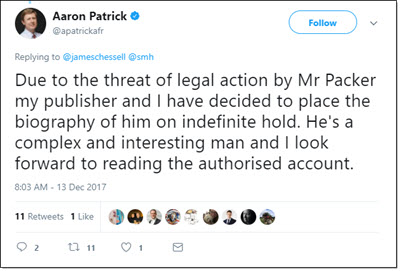 Fairfax in lockstep with Google on ads. Fairfax and Google have partnered up to work on digital advertising and product development. In a statement released yesterday by Fairfax, managing director of Australian Metro Publishing Chris Janz said the partnership was “a big step forward”. The partnership will outsource booking programmatic ads on Fairfax’s websites to Google’s automated platform, as well as work on product development and Fairfax’s use of data.

Australian publishers have been at loggerheads with Google and Facebook — Fairfax and News Corp both told the Senate Committee looking into the Future of Public Interest Journalism that the global giants’ domination of digital advertising had hurt their business models. The ACCC will conduct an inquiry into their impact on the media — one of then-Senator Nick Xenophon’s conditions for supporting the government’s media reforms earlier this year.

The revolving door. The founding CEO of Guardian Australia is heading to the news outlet’s London office to become managing director of corporate development. Ian McClelland will leave Sydney for the new role in April next year.

Copyright bungled by local councils. A Sydney council has issued an apology for breaching copyright over a number of years by publishing media clippings on its website. Strathfield Council issued and apology and has agreed to pay for an annual copyright licence, make payments for past use, as well as apologise publicly. The council said that before 2016, there was a “technical error” in its former website that “inadvertently provided limited public access to newspaper articles without the authority from the relevant newspaper publisher or its agent”.

“Overall there is genuine lack of understanding about copyright law by councils and this presents a perpetual risk of inadvertent copyright infringement. The key to fixing this is with education, and we are pleased to be working with Strathfield Council on providing them with not only a value-for-money licensing solution but training to improve future practices,” he said.

Revealing the ‘Mosul Eye’. The Associated Press reporters who profiled the “stealth historian” who catalogued Islamic State’s horrors from inside Mosul have told Poynter about how they got the interview.

“For more than three years, Omar Mohammed was essentially a stealth historian in Iraq as he risked death cataloging ISIS horrors online as ‘Mosul Eye’. He went to great lengths to hide his identity as he maintained his true persona as a jobless scholar in his native land. Hundreds of thousands read his dispatches, including journalists covering the region.”

Glenn Dyer’s TV Ratings.  Just another Tuesday night’s viewing in summer and the viewing figures tell the story. Viewers looked elsewhere after the news and current affairs ended at 7.30pm. Nine was a narrow victor in the metros. The summer boredom factor was also present on Foxtel — the fifth most watched program was an episode of Seinfeld, probably one of the most repeated programs on TV. While Paul Murray Live topped the night with 82,000 viewers. The Seinfeld repeat had more viewers than Credlin on Sky News which could only scratch together 40,000 viewers.

It is axiomatic that money talks but it also silences.