The relationship with Beijing is not at "tipping point" but requires careful maneuvering, which Turnbull seems incapable of doing.

At risk of overcooking various hunts for Manchurian candidates among elected representatives and those seeking elective office Malcolm Turnbull would serve the country’s interests by winding back his anti-China rhetoric.

While criticism of Labor Senator Sam Dastyari over his unacceptable dealings with a Chinese billionaire donor is justified Turnbull is displaying characteristically poor political judgement by going further than he needs to.

Bashing Beijing, fueling prejudices about Chinese moles burrowing into the Australian system, even invoking one of the more sacred utterances of a Chinese leader to justify overtly anti-China rhetoric all is unnecessary.

Why Turnbull should have imagined it was a good idea last week to utter the words — in Mandarin — the Australian people would “stand up’’ (by implication against Chinese interference in our internal affairs) is a mystery.

Whatever might be said about Mao’s chaotic rule and its vast costs to the Chinese people in lives and livelihood misapplying one of the more sacred texts in the recent history of our largest trading partner is, well, foolish.

This reveals a persistent Turnbull problem. Even when things are going his way, he stoops to conquer, and ends up surrendering political advantage.

At the weekend, campaigning in the suburban Sydney seat of Bennelong, the Prime Minister effectively doubled down on his previous criticisms of China.

“There has been foreign interference in Australian politics plainly,’’ he said.

It’s not clear a large Chinese population in Bennelong (something like 25,000 of the 168,000 residents are of Chinese origin) will be thanking the Prime Minister for his anti-China rhetoric.

Let’s be clear, we should have no issue with the government of the day singling out Chinese businessman Huang Xiangmo for inappropriate attempts to influence policy on the South China Sea and other matters, either by providing political donations, or, more to the point, threatening to withhold such donations if policy statements did not go China’s way.

Nor should we be squeamish about pointing out the extent to which China and Chinese money are seeking to bend Australia’s political process, more generally.

However, all this needs to be kept in perspective. The relationship with Beijing is not at a “tipping point’’, as John Brumby, former Victorian Labor premier and chair of the Australia China Business Council would have us believe.

On the other hand, if responsible Australian officials from the Prime Minister down persist in playing the China card for domestic political purposes then relations will be scarred momentarily. Foreign Minister Julie Bishop might point this out to Turnbull.

This brings us back to the Dastyari matter and further revelations in Fairfax papers today that he sought to pressure Tanya Plibersek not to meet a China critic while she was in Hong Kong. I know of another example of him telling one of his Labor Senate colleague to lay off China in his public criticism.

In all of this, it is hard to overstate Labor angst over the NSW Senator’s behaviour at a moment when the party believed it had Turnbull on the run.

In a commentary today in The Age/SMH I quote a senior Labor figure close to Opposition leader Shorten as saying “We have lost all momentum because of this.’’

After a year during which Shorten could leave it to a fractured conservative movement to do the heavy political lifting for him, the Dastyari matter has served as a reality check.

Apart from anything else the episode exposes a Labor structural problem. Dastyari entered parliament as a product of the NSW Right that helped delivered the Labor leadership to Shorten.

To that extent, Shorten is captive of a deeply factionalised system. If he were to force Dastyari out, he would demonstrate a willingness to buck that system. He should.

However, if Labor prevails in Bennelong against polling predictions, pressure will ease on Shorten, and conversely will spring back on to Turnbull, such is politics’ fluidity these days. 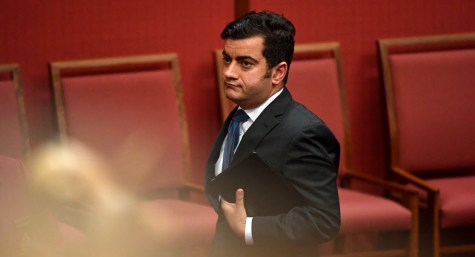 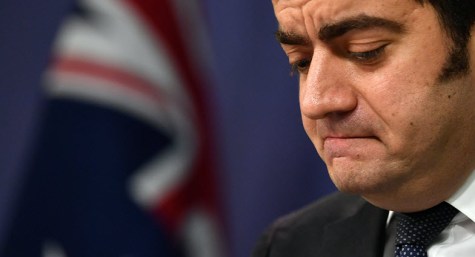 Is the Chinese political influence sufficient to balance the US influence? It is not if we count wars in which we did not need to engage.

What about Israeli influence? It allowed to talk about that!

Read not for it.

In a commentary today in The Age/SMH I quote a senior Labor figure close to Opposition leader Shorten as saying “We have lost all momentum because of this.’’
Yeah, and I quote a senior Liberal figure close to the Prime Minister as saying “Turnbull will be in deep trouble when the source of the leak to the media of secret AFP recordins of Dastyari is uncovered”.
See how easy it is to make things up when you don’t have to give actual names of “senior figures”.

That has been the ‘elephant in the room’ every time Malcolm invoked the dickhead Dastyari’s name in parliament. But the question hasn’t been asked in question time to my knowledge.

Except that the source will be not be sought, never mind found.

Anyone interested in looking at the bigger picture of our relationships with the US and China since the end of the cold war should probably read Huw White’s current Quarterly Essay.
Easy for the MSM to bash the Chinese for local political purposes, but sooner or later we will have to deal appropriately with the Chinese and relegate the USA to a minor partner – that is clearly where history is going.
In that light Dastyari is right and Turnbull is wrong, big time.

Agree. And why are doing yet another ‘me too’ alongside the US, with this China bashing? Especially, given the US is getting out of our region, China’s getting in and they are a major trading partner to us. That’s not to say, we should be a ‘pap’ to China, like we have been to the US, thus far. We should be able to voice our concerns over specific matters, as Guy Rundle has pointed out. The Chinese may not agree, but they’d respect us for our honesty. Mind you, the Chinese would have plenty to say about our human rights abuses against off-shore refugees and the aboriginal people, so we’ve trashed our leverage to some extent. And, as for Turnbull’s judgment, it’s up his proverbial. He should be speaking to his foreign minister who has more diplomacy in her finger nail so that the PM/foreign minister are truly inging from the same song sheet – I wish he’d take stock and think before he opens up his mouth.

I’m not sure I disagree with Turnbull on this. China has been conducting wide ranging interference. You’ve had articles about it previously on Crikey – business, academic and social efforts are being employed to influence policy. By speaking in mandarin and using a quote from their history, MT seems to be directly telling China to back off by delivering a message in the same manner that (as a layman I may have this wrong) that China seems to employ internally. Namely, using the superior culture and achievements of Chinese society and historical figures to justify pretty much whatever they like.

And besides, even if China is the whipping boy of the moment, I completely agree with more transparency regarding political donations.

Oh dear, we joined the US in three illegal invasions this century, how many did we conduct for China? The AWB stole $300 million from starving Iraqis and gave it to the CIA dictator of Baghdad and not one pollie lost their jobs.

Andrew Robb took an $800,000 job with the Chinese and helped Adam Giles flog off the Darwin Port to China. It’s time the pathetic media in this country stopped aiding and abetting the bullshit.

The AWB crap was during the reign of Little Johnnie. He and his sycophants drew up the terms of reference for the Royal Commission looking into the AWB scandal which found that none of the crooks were guilty. Now Malcolm has drawn up the terms of reference into the one year commission into his mates in the banks activities. What chance that we’ll follow Iceland’s lead by jailing the bastards? NONE.
Anything I say about ROBB would probably be libelous.

Capitalising on Dastyari’s poor judgment is easy, but the PM is using it as a smokescreen, along with the marriage equality debate, to propose amendments to foreign influence laws that are amazingly wide in their scope and a major threat to some fundamental rights and freedoms. The mainstream media seems oblivious to much of this.
The focus on alleged Chinese influence buying also detracts from the far greater and far more insidious influence of the American and Israeli lobbies. If there is to be an inquiry into foreign influence, it should not start and end with Beijing.