A day in pictures. Yesterday — for all the criticism you could aim at the process that got us there — was a good day. It was certainly a good day for parliamentary snappers, who captured an array of indelible images: 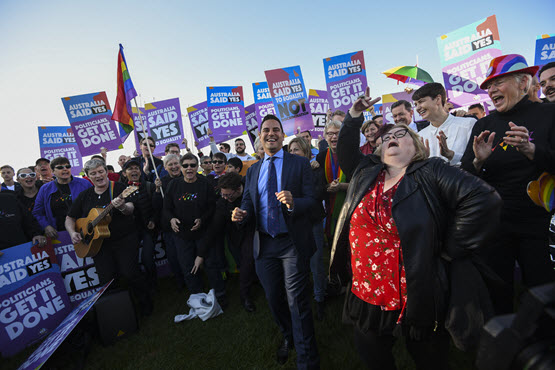 As the debate groaned on and on, as opponents of the bill put forward amendment after amendment everyone knew would fail, Yes campaigners congregated outside the above; the picture above of actor Magda Szubanski and Independent NSW MP Alex Greenwich gives some idea of how much dancing went on; but only in motion, with Szubanski and Christine Forster trading moves can you really get a sense of it — exquisite, lovably naff, joyful. 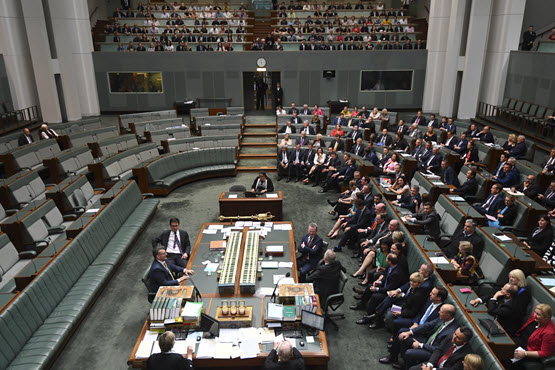 When the vote finally took place, and the division gave a visual representation of how conclusively the argument had been decided.

And perhaps the defining image of the evening, the front page image for the Sydney Morning Herald and The Australian. Labor MP Linda Burney — who earlier in the week had spoken so movingly about her deceased gay son in urging the passage of the legislation — throwing herself into the arms of Liberal National Warren Entsch, the burly regional Queenslander and long time marriage equality advocate. It was a raw, human and apolitical moment, and we may not see the like of it on the floor of parliament again. 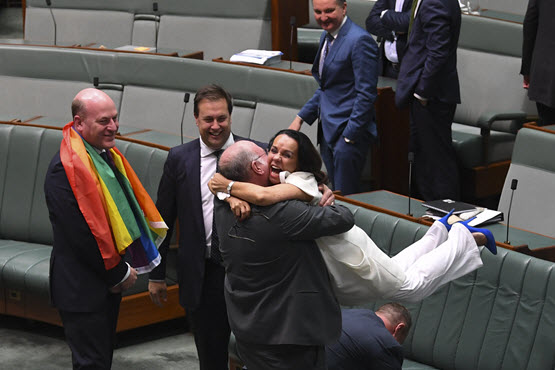 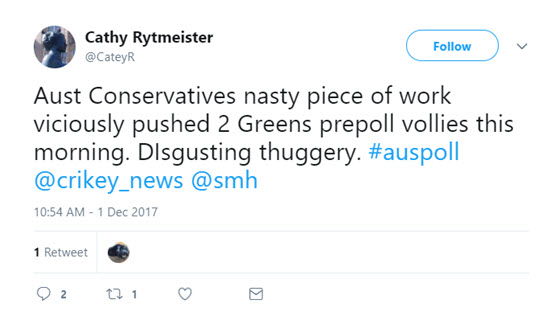 Ms Tips spoke to Rytmeister, who said the Greens volunteer wasn’t seriously hurt but they was “shocked and shaken up by it”.

So it’s my understanding there have been Australian Conservative volunteers who have been quite aggressive over the last couple of days of pre-poll,” Justin Alick, Greens candidate for Bennelong told Crikey. “One of our volunteers was pushed over … He fortunately was not seriously hurt and we are respecting his wishes not to be drawn into the national spotlight as a result of this incident.”

Solid B for Rate Your Boss. Earlier this week, hospo union United Voice launched Rate Your Boss, a Trip Advisor style ratings website were hospitality workers to call out bad (and good) employers. Users can search businesses by rating or suburb, and businesses can anonymously be rated out of five for “respect for staff” and “correct pay”.

But of course, we know how the internet works. Online rating apps are notoriously difficult to moderate — what steps do United Voice take to ensure that the feedback registered is genuine, and not an employer trying to get an unearned good reputation, or a rightly sacked employee trying to ruin a genuinely decent boss’ reputation? We asked United Voice about their process, but didn’t hear back before deadline.

Interesting to see that Abbott (& several others) were not in the House for the final vote, surprise surprise. History shows he’s not a good loser.

Surely, with all the photographers and TV cameras around the chamber at the time it is possible for someone to do some simple accounting. Who was in the room when the final division was called and who remained when the doors were locked. You are right about Abbott but who exactly were the “several others”?

According to The Daily Mercury (online) the ‘no’ voters were….
‘Outspoken Queenslander Bob Katter – who earlier in the day argued same-sex couples were trying to “steal” the word ‘gay’ – was joined by Hinkler MP Keith Pitt, Maranoa MP David Littleproud and McMillan MP Russell Broadbent….’

‘The House of Representatives has not confirmed the number of MPs who voted yes or abstained, as this is “standard practice” when there are fewer than five “no” votes, it confirmed.

It’s unclear how many MPs abstained from voting although there are reports it could be up to 12. The Australian has named Tony Abbott, Andrew Hastie, Michael Sukkar, Kevin Andrews, Scott Morrison, Alex Hawke and George Christensen as among them.’

Frankly, I think many voters would be fascinated to know if their federal Member abstained from supporting the wishes of 62% of the Oz electorate.

The ABC has just published a slightly different abstain list:

At least this time he made it out of the Chamber before the doors were closed.
Still fleet on his feet, pity about the head.

How many of those grubs singing along – particularly on the Labor side – voted in favour of changing the marriage act to make same-sex marriage illegal in the first place ?

Despite many who have claimed to, it isn’t something I can imagine anyone genuinely having a Damascus moment about.