Less than four months ago, the current political situation in Cambodia would seem almost implausible.

While there were thoughts and fears stalwart Prime Minister Hun Sen and his ruling Cambodian People’s Party (CPP) would like to see the erosion of the country’s hard fought-for democratic and human rights based institutions, no one predicted things would escalate this quickly.

Now, three months since opposition party leader Kem Sokha was arrested on dubious “treason” charges based on a speech he made in Melbourne in 2013, those fears are becoming a reality.

On November 16, Cambodia’s Supreme Court dissolved the opposition party, The Cambodian National Rescue Party (CNRP) and banned its members from political activities for the next five years.

They have also used a string of spurious legal and tax loopholes and investigations to close independent media outlets and NGOs including The Cambodia Daily, Voice of America, Voice of Democracy and the National Democratic Institute.

Until last weekend, it looked like the next group to go would be leading local human rights group, The Cambodian Centre for Human Rights (CCHR), which was founded by Sokha. Hun Sen demanded the Interior Ministry investigate and shut it down during a speech he made to garment factory workers late last month.

However, on Saturday he was was quoted as saying the organisation would not be closed down, stating an investigation of the organisation had been carried out and had found no wrongdoing in their activities.

Chak Sopheap, director of CCHR, said her staff were relieved they would not be shut down, but had only indirectly heard about the investigation of her organisation.

The government’s actions are based on the fear of an electoral loss next year after the CNRP made significant gains in the 2013 national elections, and in July’s local commune elections, according to Brad Adams, Asia director of Human Rights Watch.

“Prime Minister Hun Sen needed little time after shutting down the main opposition party to go after a major human rights group,” he said in a statement released last week. “The prime minister is showing his fear not only of free elections, but of free expression and association.”

CCHR was founded in 2002 as a non-partisan, independent organisation to promote and protect human rights throughout Cambodia. The organisation was quick to note in a press release after Hun Sen called for them to be investigated, that they had seen two leadership changes since Sokha left the organisation to return to politics in 2007.

“CCHR wishes to re-affirm its absolute non-partisanship and independence from all political parties. Strict independence is a core value of CCHR, which strives to provide a balanced and principled human rights analysis of public affairs, without favouring any party,” the statement said.

The organisation has long been critical of both the ruling party’s actions as well as the now-dissolved opposition party.

However, with fears of losing next year’s national elections clearly at the forefront of the government’s mind, Cambodia’s independent and critical civil society sector stands on a knife edge, with its existence entirely dependent on the whims of Hun Sen.

Human Rights Watch has called on donor partners, including Australia, to impose sanctions such as freezing assets and enforcing travel bans on Hun Sen and senior members of the CPP, while the US has already pulled support funding from next year’s elections.

“Without a legitimate political opposition in the country, Cambodians need a vibrant and independent civil society more than ever.”

Sophal Ear, Cambodian policy analyst and associate professor of diplomacy and world affairs at Occidental College, said Australia should be more than “deeply concerned” about the situation, quoting a statement released by Foreign Minister Julie Bishop following the dissolution of the CNRP on November 16.

“Australia has a long tradition of upholding democratic norms and being a leader despite its middle power status,” he said. “It should continue to serve as a beacon of hope for millions of Cambodians who know the Australian people … are so much better than this.”

There are calls from within Canberra for stronger action to be taken by Australia, with Labor MP Mark Butler sending a letter to Bishop last Tuesday asking what concrete action is being planned in response to the Cambodian government’s actions.

“These actions destroy any chance of national elections due in 2018 being remotely free or fair,” he wrote.

Former CNRP deputy president Sochua Mu is expected to speak to a rally of supporters in Canberra on December 5, before meeting with Bishop to submit a petition calling for sanctions against Hun Sen and high-ranking military officials.

Despite the temporary relief of CCHR being spared, it is all too clear the threat to Cambodia’s civic freedoms is greater now more than ever. 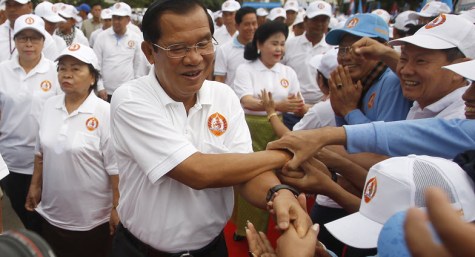 Cambodia at a crossroads after election termed a ‘mockery of democracy’ 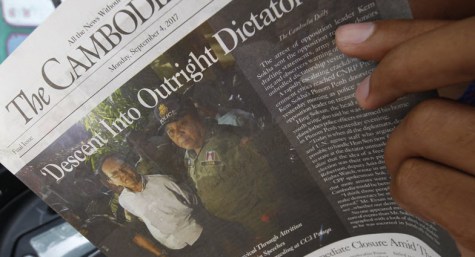 It’s true isn’t it? Can’t remember if it was Australia’s Minister for Immigration or, Foreign Affairs . . . someone sent $5 MILLION . . . . and ONE Refugee to help out Cambodian Govt?

I think it was $50M for four, three of whom left within months.

Cheers AR. Think your right on both accounts. Knew it was a humungous figure but chose $5m which still not a bad return on a couple of weeks for doing nothing.

Aren’t we still paying them to take our excess refugees? A terse word on this and they could turn their back on that multi-$million “deal”? Wouldn’t want to risk that.

We have “excess refugees”? Who knew?