The Daily Telegraph has again chosen to reference a sitcom in its front-page coverage of the marriage equality legislation passing parliament.

Tele just trolling now. Yesterday’s passing of Australia’s same-sex marriage legislation didn’t prompt the white-wash of front pages we saw following the postal survey announcement, but it was The Daily Telegraph‘s puzzling choice of a reference to a sitcom that has again raised eyebrows. In an echo of its front page image of Married With Children‘s Al Bundy, played by Ed O’Neill, after the postal survey, today’s front page is a photoshopped publicity shot from Modern Family, which also stars O’Neill. He is the only character whose face remains after the Tele‘s artists were done with it. 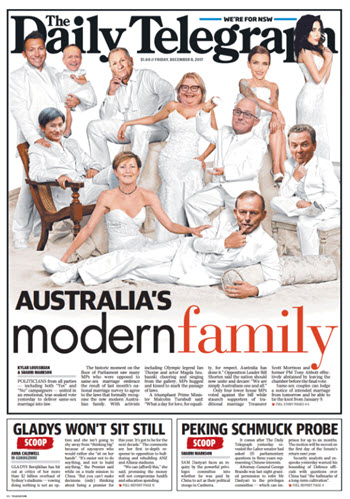 Fairfax’s metro daily newspapers were the only other major newspapers to dedicate their full front pages to the story. 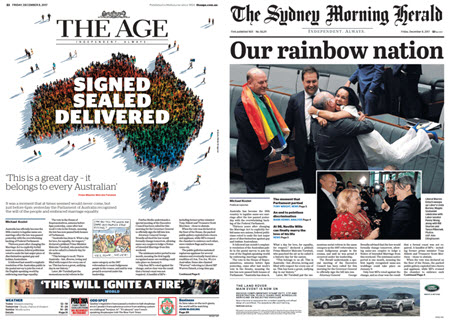 Seven goes back to court with Amber Harrison. The Seven Network has served legal papers on Amber Harrison for alleged contempt of court for breaching an order not to talk about the network. Harrison was ordered to pay Seven’s legal costs after she dropped her high-profile court objections to a permanent gag order. But Seven has now lodged documents with the NSW Supreme Court alleging she is in breach of that order after giving media interviews and tweeting about the network.

How a fake restaurant became Trip Advisor’s #1. A Vice reporter has revealed how he scammed his way to the top of TripAdvisor’s restaurant ranking with a fake business called The Shed at Dulwich. He then made it come true, serving ready meals and fit out with chooks to “pick your chick” for the kitchen to cook.

The tone of the emails shifts, with people from all over the globe asking to visit. And then, one night, I get an email from TripAdvisor. Title: “Information Request”. Fuck – the game is up. I’ve been rumbled. My fingers tremble as I open it: 89,000 views in search results in the past day; dozens of customers asking for information. Why? Well, on the 1st of November, 2017, six months after listing The Shed at Dulwich online. It’s London’s top-rated restaurant.

RIP Lateline. The last episode of the ABC’s evening news and current affairs bulletin Lateline went to air last night. The ABC announced in October that the show wouldn’t return next year in a shake-up to TV current affairs. For the final program, they had politicians reflect on their experience with the program over its 28 years on air, including Kevin Rudd, Kim Beazley and John Howard. 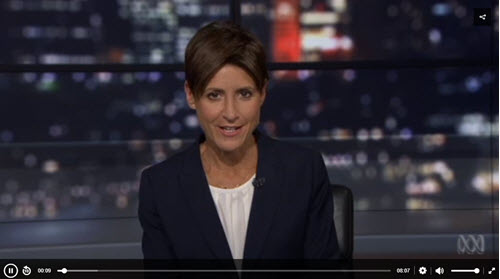 Glenn Dyer’s TV Ratings. Test cricket deprivation syndrome set in yesterday, and last night and more of he same lies ahead for another week. Seven’s night, Ten was fourth and the ABC third.

Suddenly, Lego is hot. Anybody watching LifeStyle channel would have seen A Big Lego Christmas last night (only 51,000 did, thankfully). It was a Channel 4 special from 2016. On SBS on Sunday Night we find Beyond The Brick, a Lego Brickumentary. Yesterday,  December 7, was the anniversary of the Japanese raid on Pearl Harbour back in 1941. Foxtel programmers marked the anniversary by showing Tora! Tora! Tora! — Hollywood’s version of the “date which will live in infamy”.

Lateline – the funniest part of last night’s episode was the “All About Emma” wrap.

So channel seven management is continuing the mindset that allowed Don Burke to continue to abuse people, both male and female. Amber Harrison appears on the face of it to have paid a high price for her affair with her boss, whilst he remains untouchable. Have these boardroom thugs and managers learned nothing?

Crazy brave Amber. When so far down, it all looks up.

I am fairly sure Harrison is neither blameless nor in terribly good faith, but it’s a farcical disgrace that in the internet age a court can still order someone ‘not allowed to speak in public’, on pain of jail. Meanwhile here’s that pompous privileged windbag Rush on m’telly just now, pretending to have no choice but to sue, to relieve his ‘intolerable situation’. Really.

‘Reputation’. What a load of crock. He can afford to pay for the courts to ‘protect’ his. Amber Harrison’s gets trashed by the same process.
Want a ‘reputation’? Don’t be a poor woman. Be a rich man.

I will miss Lateline. The full World Today. Why is it that it’s the quality female presenters who are being quietly culled, btw?