If Trump's recognition of Jerusalem is the first step in his 'ultimate deal' for Israel-Palestine, then he better hope the next step reverses it.

Foreign Minister Julie Bishop might have avoided criticism of President Donald Trump’s decision to break with his predecessors by recognizing Jerusalem as Israel’s capital, but she was quick to assert Australia’s stock standard position on the subject.

“Matters relating to Jerusalem are subject to Final Status negotiations between Israel and the Palestinian Authority,’’ she said.

What this means is that all the issues that stand in the way of a settlement, including territory, refugees, the status of Jerusalem itself, and security arrangements need to be addressed as part of a comprehensive peace.

In effect, Trump has detached Jerusalem from other elements of a putative peace plan by conceding Israel’s claim to its portion of the city as its eternal capital.

Dismayed Palestinians would regard this as giving away an important bargaining chip.

In the president’s words: “Today we finally acknowledge the obvious: that Jerusalem is Israel’s capital. This is nothing more or less than a recognition of reality. It is also the right thing to do. It’s something that has to be done.’’

What is surprising is that Trump has decided now is the moment to announce a highly contentious decision when no obvious purpose is served by adding to regional tensions at a time when the entire Middle East has scarcely been less stable.

An unresolved civil war in Syria, tensions between Saudi Arabia and Iran, outbreaks of extremist violence in Egypt, a persistent threat of Islamic State terrorism, bitter conflict in Yemen, unrest among the Kurds all provide a backdrop to Trump’s announcement.

What is perhaps most perplexing — unless there really is an overarching and credible plan in the works to resolve the Arab-Israel dispute – is that the Jerusalem decision will complicate things for America’s moderate Arab allies across the Middle East.

The question should be asked: why would Washington want to embarrass its friends in Riyadh at a moment when indications are that Saudi Arabia might be willing to collaborate with Israel and the US in the search for Middle East peace?

Trump describes his decision as “a long overdue step to advance the peace process,’’ but in the absence of any detail it is hard to attach much credibility to this assertion.

What America is putting at risk is its traditional honest broker role in Middle East disputes that go back to President Dwight Eisenhower’s intervention in the Suez crisis to bring about an end to a conflict between Egypt and what was known as a “tripartite alliance”, made up of Britain, France and Israel.

Criticism of Trump’s action from world leaders, including the Pope, traditional allies like Britain, and NATO partners like Turkey has been predictable. All regard his decision as unhelpful.

That will remain the case unless the administration can convince people it has a workable plan to resolve one of the world’s most intractable conflicts, and one that proved an elusive prize for all American presidents going back to Richard Nixon.

All have devoted considerable diplomatic capital to the search for Middle East peace.

Among them Jimmy Carter stands out having written his name into the history books with his negotiations of the Camp David Accords bringing about peace between Egypt and Israel, and facilitating Israel’s withdrawal from the Sinai.

Trump has been talking about the “ultimate deal’’ to resolve the Palestinian question.

In his own calculations he may believe that by applying some shock therapy to the situation, participants will be more amenable to compromise. But indications are that his announcement will have the opposite effect.

An interesting sidelight to all of this is that it draws attention to United Nations Partition Plan resolution 181 of November 29, 1947. Part III of that plan provided for a “special international regime” administered by the UN to oversee Jerusalem.

This was the plan drawn up under the supervision of then Australian Foreign Minister Bert Evatt.

The section dealing with Jerusalem was swept away in Israel’s war of independence that followed the UN vote. The Arabs rejected outright the Partition Plan.

Following Trump’s announcements prospects for the internationalisation of Jerusalem or its later incarnation “shared sovereignty’’ seem farther away than ever. 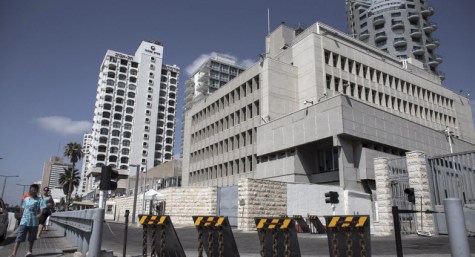 Israel’s Gaza offensive: how will Egypt, Syria and Iran react?

“An unresolved civil war in Syria” Unresolved it may be, but it’s not and never was a civil war.

It’s a distraction from his Fake President unpopularity problems at home – imagine what WWIII could do?

Oh but serve a purpose it most definitely does. No headlines on Russiagate today

With Trump I always start by looking at the money. He has various financial interests in Israel and his neophyte negotiator Jared Kushner has extensive links, not to mention a chummy relationship with Netanyahu. While both would say they’ve divested themselves of their businesses, arguably there isn’t sufficient distance to prevent conflicts of interest – the White House ethics director was scathing in his assessment.

So, is Trump motivated by venality in doing this big favour for Israel? It’s a shocking thought. But we already know that he’ll benefit financially from some of his domestic policies (taxation’s the big one). And even if there’s no direct quid quo pro, it’s not a stretch to see how his decisions might be coloured by his personal and business interests. I also thought there was a likely conflict of interest in his lean to Saudia Arabia, the first country he visited as president. Along with Trump’s need to feed his base, it does help explain why he’s been prepared to give away so much for apparently so little.

Agree about the money angle.

Also, Trump gets his jollies by being controversial, the more people he outrages the bigger the high. Remember, he doesn’t drink alcohol so stimulus needs to come from other sources.

old greybearded one
Reply to  CP

Jared Kushner’s father is a settlement backer, a prince of thieves perhaps. Therefore, Trump will have money in there somewhere. It costs Trump nothing. The ABC correspondent says it undermines the credibility of the US as an honest broker. They are kidding yeah The USA has never been anything but a dishonest broker in the middle east. It always sides with Israel not matter what.

Just how many lives is this moron going to cost? All very well that he messes around keeping scum like good ole Judge Roy in power within the borders of his bailiwick, But he seriously shouldn’t mess with delicate situations in regions that didn’t vote for this idiot. He’s America’s proof that their form of democracy isn’t all that it could be. They could at least keep him to themselves.