‘Go and do your research, maggot’. Labor MP Brian Mitchell has called ABC journalist Matt Wordsworth a maggot as he was trying to interview former dual citizen Justine Keay outside Parliament. Wordsworth’s ABC colleague Dan Connifer filmed the encounter, and wrote for the ABC that the MPs had been attending a barbecue at Parliament House yesterday, when Mitchell tried to block reporters from questioning Keay about the steps she took to renounce her UK citizenship.

As Wordsworth put his questions to Keay, Mitchell said, “go and do your research, maggot”. 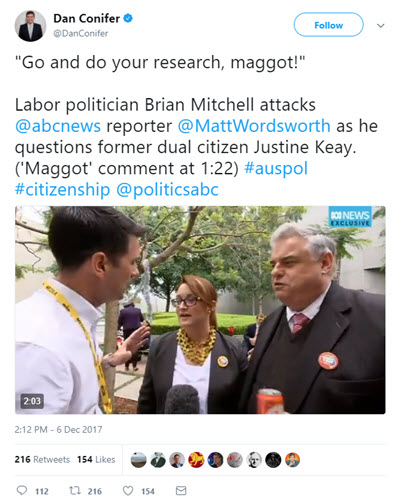 Foxtel merger fine by regulator. As widely expected the competition regulator, the ACCC, has decided to not oppose the proposed merger of Fox Sports and Foxtel after finding the transaction would not substantially lessen competition. News Corp and Telstra are negotiating the merger of Foxtel (50% owned by each) with Fox Sports (100% owned by News). Telstra’s share in the combined company will drop to 35% with News holding 65%, a stake that will see huge changes in the size and shape of its balance sheet, its revenues, cash flows and perhaps its earnings.

“Foxtel and Fox Sports have a close and long-standing relationship, operating within the ownership of News and Telstra. Given News’ current interests in both Foxtel and Fox Sports, it would be unlikely that Fox Sports would be made available to competitors of Foxtel in the absence of the merger,” ACCC chairman Rod Sims said.

The ACCC also considered the effect of the merger and related agreements on the supply of triple play bundles of voice, broadband, and audio visual content by broadband and mobile providers. As part of the merger transaction, Telstra is appointed the exclusive telecommunications agent for Foxtel’s digital products. — Glenn Dyer

Insert headline here. The Cambridge News has apologised for a rather obvious error on its front page. Apparently due to a technical error, holding copy was left in the front page headline of the paper that went out. BBC reporter Alice Hutton tweeted that there were seven redundancies at the paper in July, including four sub-editors, while the majority of subs had been made redundant a few years ago. 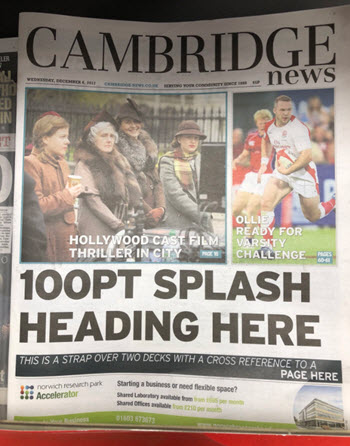 Time‘s person of the year. Time magazine has announced its person of the year as “the silence breakers” behind the #MeToo movement — the women who have spoken out about the harassment, inappropriate and sometimes illegal behaviour they’ve faced. Time explained the movement:

“This reckoning appears to have sprung up overnight. But it has actually been simmering for years, decades, centuries. Women have had it with bosses and co-workers who not only cross boundaries but don’t even seem to know that boundaries exist. They’ve had it with the fear of retaliation, of being blackballed, of being fired from a job they can’t afford to lose. They’ve had it with the code of going along to get along. They’ve had it with men who use their power to take what they want from women. These silence breakers have started a revolution of refusal, gathering strength by the day, and in the past two months alone, their collective anger has spurred immediate and shocking results: nearly every day, CEOs have been fired, moguls toppled, icons disgraced. In some cases, criminal charges have been brought.”

US President Donald Trump was runner-up for the title.

Murdoch’s Disney job scuppered. Oh, no, James Murdoch, has your stint at Disneyland been cut off before you even have passed through the turnstile? The Wall Street Journal, a Murdoch family outlet (via News Corp) is now reporting that the man James was tipped to replace, Disney CEO, Bob Iger, is likely to renew his time in the top job if Disney buys all the broadcast and cable assets from 21st Century Fox. That’s despite Iger saying last year that his current term was going to be the last one. Is it a coincidence that this news emerged a day after Murdoch’s name was floated as the new head of the Mouse empire?

According to The Journal report ‘sources’ (among the Murdoch males?) say the extended tenure for Iger is likely as the biggest acquisition in Disney’s history heads for some kind of decision possibly early next week. The Journal says any move by Iger to stay would see him extend his term by another two or three years if the Fox deal happens. If it doesn’t, he’s out of there, but Murdoch stays at Fox. — Glenn Dyer

Glenn Dyer’s TV Ratings. An early end to the pink ball torture from Adelaide meant it was even stevens for the networks in prime time last night, and viewers voted with their remotes, departing en masse for the digital channels. The combined share of the 14 digital channels was a very high 37.1%, much higher than the combined share of any single network. The mixture of odd shows, repeats, low ranking programs, old movies and whatever else proved to be more alluring than what was on the main channels.

In the same vein, SBS ONE’s share jumped to 7.1% (not far behind Ten’s 8.9% share) with the return of The Vikings (291,000 nationally) and another episode of Struggle Street (441,000 nationally) which concludes tonight. Nine did not issue amended ratings data to account for the early finish to the cricket, so reported that second session was watched by 691,000, and the third session was watched by 537,000. Overall, Seven won a very poor night.

Why do politicians waste money on lawyers, who not only know a thing or two about the Constitution, but can understand basic English : when they can see a “journo” for free to find out whatever they need to know, as well as being able to whip up an obfuscation thick-shake like no one else?

When their Coalition was going through their embarrassment you’d have thought there’d been a death in the Sales, Alberici, Lipson, Probyn Wordsworth family – but now they have a spring in their step with a chance to “get back at Labor”?
When it comes to “take all reasonable steps” they seem to see some sort of “comparison” between the likes of Galligher and Keay who apparently “took all reasonable steps” to divest themselves of their citizenship impediments weeks before nominations closed (Probyn – Monday night’s ABC news) : and the likes of the “Born to Entitled Rule” in Jethro, Nash and Alexander – who “took no steps”; while Roberts took steps to send his application to “The British Foreign Office c/- Sesame St”?
That somehow “take all reasonable steps” means taking responsibility for that foreign office to respond in time before taking up a seat?
From a Constitution drafted when mail went and returned by sea, to The Motherland and beyond – taking weeks?

Wotta surprise that the sense of entitlement and affronted lese majeste is bi-partisan!
Clearly Mitchell hasn’t missed many dinners, probably subsidised, since being ensconced in the Hole on the Hill.
If only that new security fence could prevent them escaping and annoying the tax payers.