Services no longer required. A new host for ABC Canberra Mornings will be announced today when the radio program for next year is released. The long-serving broadcaster Genevieve Jacobs told listeners this morning she’d been told she was no longer required (the Canberra Times reports she was offered an off-air role as a replacement, which she rejected). ABC Melbourne breakfast presenter Red Symons announced last week he’d also been told he would be off the show next year.

Staff were told on Monday that radio current affairs programs The World Today and PM would both be reduced to 30 minutes each, making room for a new national entertainment program hosted by Myf Warhurst. That change will also mean local radio drive programs, before PM, will be shorter.

Layoffs take a bite out of Snackable. Snackable TV has closed its Sydney office and made its last three full-time staff redundant last week, AdNews reports. The media company, which creates short-form video content aimed at Millennials, was given a start-up government loan earlier this year, which its owners told AdNews has been repaid.

The digital media company is just the latest to cut jobs. HuffPost Australia ended its joint venture with Fairfax last week, making most of its staff redundant, and US financial website TheStreet has made its third round of job cuts in 14 months. As well as the latest round of cuts, the website will push into a subscription model.

Vice, BuzzFeed, Mashable have all also cut jobs and/or restructured this year. Mashable sold itself for just US$50 million, a fraction of its value two years ago. At the close overnight on Wall Street, TheStreet had a market value of just US$76 million. That was almost double what it a month ago. Since November 8, the share price has risen from 84 cents to US$1.56 this morning, without explanation. In June 1999, in the midst of he first great net and tech boom, the shares were trading around US$36. — with Glenn Dyer

Front page of the day. The full story in the Northern Territory’s only daily newspaper quotes an unnamed witness who spotted a nude couple on the balcony of a Darwin apartment: “At first I thought they were wearing nude swimsuits but upon closer inspection I saw, in great detail, their private parts dangling about. I probably looked longer than was kosher but it was an absolutely mesmerising sight.” 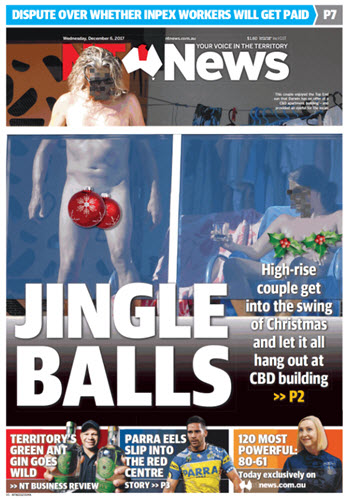 James Murdoch tipped as Disney CEO. James Murdoch is being touted as the CEO-in-waiting for Disney — a move that would be a split in the Murdoch family over the looming sale of about half of 21st Century Fox’s assets to Disney. According to a report in the Financial Times, Murdoch is a potential successor as CEO of Disney as part of deal discussions over the sale.

Murdoch presumably would remain a member of the Murdoch Family Trust which controls 38% of Fox and News Corp, while a senior executive of a rival media company in Disney. That would be a big conflict of interest by even Murdoch standards. But he comes with more baggage — Murdoch is currently chair of Sky in the UK (re-elected in October). Fox is currently trying to takeover Sky in the UK.

His continuing role at 21st Century Fox during the current Sky takeover attempt hasn’t gone unnoticed by UK critics who have used it to question the bona fides of the Murdoch company’s bid on media plurality and governance grounds. Transferring to Disney won’t help because the bid continues if Disney buys the 38.1% of Sky owned by Fox. This, plus the Murdoch Family Trust situation raises questions about Murdoch’s suitability at Disney. He would have a foot in two camps — on both the selling and buying side of any deal for Sky.

Disney reportedly leads in the race to acquire Fox’s movie studio, cable channels, international units and regional sports networks in a deal expected to carry an enterprise value of more than US$60 billion. — Glenn Dyer

Glenn Dyer TV Ratings. Day three of summer ratings and — howzat! — Nine’s second Ashes Test beat The Good Doctor on Seven last night, but it was close. The third session of the pink ball test averaged 1.80 million, the final episode of the GD averaged a very solid 1.68 million. The second session of the test had 1.25 million viewers on average, and the first session, 850,000. Ten and the ABC were also-rans.

I always thought that the trashing of the NBN would be this Govt’s worst legacy, but I’m now thinking it will be the destruction of the ABC.

Competitors for Murdoch profits : in return for good PR.

The World Today is such a good program with good journalists. PM is only half an hour on RN anyway. I quite like Myf, but would rather see RN with some decent music, that is not 20 something or classical. It used to be great at this. But can we do something about the breakfast and drive on RN, both hosted by female presenters promoted endlessly and advanced way beyond their ability. It is instructive to compare Ellen Fanning, an incisive reporter, with Fran Kelly who is rarely across the brief and attacks the weak while crumpling in the face of coalition ministers. Butler, Wong, Dreyfus and Bowen politely make a fool of her. Karvellis on drive is better but the silly vapid giggling ill becomes her. there are certainly talented women in Rn, just not the ones we see in the front line.

The impossible brief, “attract young listeners” to RN means that it will be down, down to dumbdom and STILL not successful.
One goes to RN when intelligent, mature or interested enough in reality to SEEK it out, not drawn by inanity such as those excruciatingly accented ID indents after each hourly news bulletin (we know we are on RN, so stop it pleeeeez) and sliced & diced lifestyle snippets.
It was reported that the aim of cutting AM/PM was “to leave them wanting more” in which case they will go elsewhere for details and probably stay there.