The Australian National Dictionary Centre has surprised Aussies with a word of the year that most of us have never heard of -- "kwaussie".

The Australian National Dictionary Centre has surprised Aussies with a word of the year that most of us have never heard of.

The centre — funded by the Australian National University and Oxford University Press Australia — announced yesterday that “Kwaussie” was its word of the year. The announcement was picked up by the ABC’s Radio National, and The Canberra Times online, and appeared in print in the Fairfax newspapers today.

Director Amanda Laugesen told Crikey the portmanteau of “Aussie” and “Kiwi” came to their attention because of the dual citizenship saga in politics this year.

Laugesen said the centre had found evidence in print, but mostly on social media. When Crikey checked, we could only find a handful of instances of the word in traditional media, and the only recent one was Van Badham’s Guardian Australia piece about Barnaby Joyce’s citizenship schemozzle. And not even Google has registered much interest in the word: 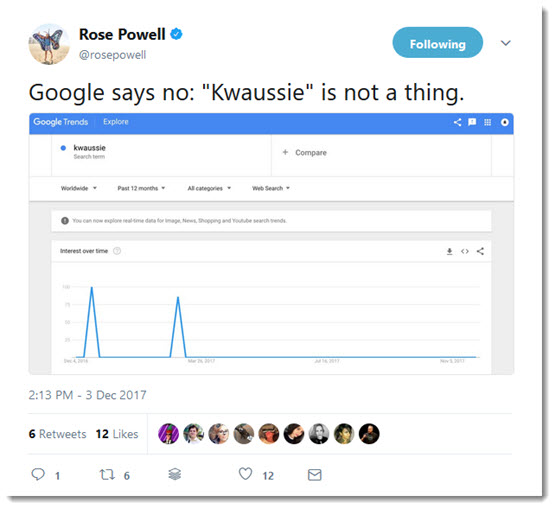 Picking a “word of the year” is a regular publicity announcement for dictionaries around the world. Macquarie Dictionary announces its word of the year every January, and chooses from a word that has been selected, researched and newly entered into the dictionary the previous year. In a blog post about other dictionaries’ words of the year, the Australian dictionary said it always chose a new word once the year had ended:

Why the ANU was the target of a massive cyber attack

Attacks on ABC and unis won’t stop. This is a government seeking control.

So will Speedo produce the first Kwaussie cossie this week?

With a velcro-removable Commonwealth star to change the country.

KWaussie, not that far removed from how Maori “Aussies’ often describe themselves as “Mozzies”.

I fail to understand why ‘robodebt’ didn’t come to the fore – everyone knows the word and most loathe the concept.