The journalists' union has met with HuffPost Australia staff, and says they were disrespected by their employer when it shut down its local edition.

HuffPost ‘disrespects’ redundant staff: Union. The journalists’ union, the MEAA, has met with staff from Huff Post Australia still reeling from the site ending its joint venture with Fairfax Media last week. MEAA media director Katelin McInerney said in a statement that staff had been better informed on the website’s future in Australia from other news outlets than they were by their own employer: “They feel they were shown a lack of respect leading up to Wednesday’s announcement. In contrast to the bullish public statements by both companies, there will be very few opportunities for the staff to be redeployed within Fairfax.”

Fairfax and Huff Post announced last week that the partnership would end, and only some staff would remain with the pared-back local edition.

Part of the changes to the production process will see editing done by just one group of copy editors without the overall supervision and checking of the chief sub. Presumably art direction will be done in a similar fashion.

Bauer Media would not confirm the number of redundancies, or the positions, but did confirm there were a “small number of people impacted”. In a statement, Bauer Media said: “This restructure is aligned to effective business practices of continually reviewing our company and ensuring that we have the most efficient ways of working.”

The revolving door. The Seven Network’s long-serving communications boss Simon Francis will be leaving the network, The Australian reports. His departure follows the resignation last week of the director of production Brad Lyons last week, and the head of corporate and regulatory affairs Bridget Fair.

Over at Aunty, Triple J’s mornings presenter Zan Rowe announced she’d be leaving the show and moving across to Double J, and starting a new role as the ABC’s music correspondent. And the ABC’s children’s news program Behind the News is switching up the face of its program, with host Nathan Bazley stepping back from his role as host. Bazley has hosted the program for 10 years, and will continue on as series producer — a role he had also been filling.

ACCC to probe internet giants’ impact on news. The Federal Government has directed the Australian Competition and Consumer Commission to hold an inquiry into Facebook and Google on media and advertising, promised as part of its deal with Nick Xenophon to push through the media reforms. The terms of reference include considering the market power of digital platforms, their impact on news and journalism, and the impact on media and advertising markets. 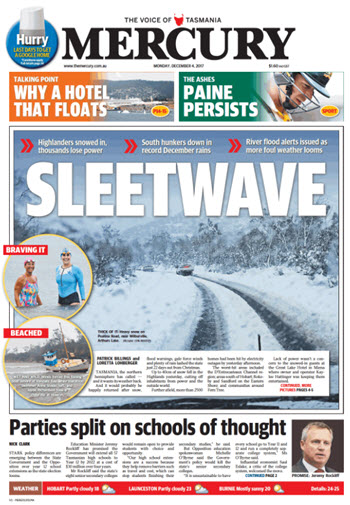 Glenn Dyer’s TV Ratings. Welcome to the first ratings report of the 2017-18 summer. The second day of the Ashes Cricket test in Adelaide dominated of course with Australia batting, battling and then conquering England. The final session clocked 2.14 million national viewers (it was rain-affected, so the figure could have been higher). The second session averaged 1.70 million and the first early afternoon session, 1.42 million.

And that meant an easy win for Nine (and no doubt tonight as well). Ten was weak, as you would expect. Insiders averaged 573,000 viewers for the ABC at 9am yesterday with its coverage of the New England By-Election and other events in politics. The hitches in the interview with Barnaby Joyce (a phone interview instead of a live TV cross) summed up the stumbling NBN problems. As panelist Laura Tingle pointed out, New England was where the NBN went first into regional Australia!

Ten made The Sunday Project (6.30 – 7.30pm) disappear with the click of a mouse — it was in the early schedules, gone last night — replaced by a David Attenborough special Hotel Armadillo. Rested for the long break? The ratings were pretty average anyway. — Read the rest on the Crikey website

Wow, the loyalty and dedication of the LNP to Rupert Murdoch’s needs is so touching.
The impact of “foreign” media giants on News Corps advertising revenue is strange. They are not at all concerned by the impact of a religious , ulttra right wing, climate denying, pro coal , anti NBN, anti ABC , anti union , newspaper and radio monopoly pushing a conservative narrative.
News Corp itself is “foreign” , controlled by US citizen Rupert Murdoch via his 21st Century Fox.
The LNP initially canceled the ABC overseas broadcasting contract because Sky TV claimed the contract should have been awarded to Rupert &Co. They started to slash the ABC budget. For Rupert sees the ABC as a drain on his profits.
They then helped him noble the Netflix friendly NBN and used the AFP to raid Labor opposition To an inferior Fraudband, ran a witch hunt campaigns to protect Rupert’s overseas copyrights over the overpriced content on his cable Foxtel, ran an outrage 18c law dispute for his shock jock Bolt via IPA proxies to protect his nasty headlines habit ( everyone is entitled to be a bigot), bought his would-be stranded asset Foxtel cables to deliver a copper wire NBN, promoted coal assets as good for humanity and repealed or hindered any alternate renewable energy projects.
The fact that The Australian is an unabashed propaganda organ for the LNP is beyond dispute. It ran Multi Million $ losses for years to support Abbott and now Malcolm hands out a reward of $30m to Foxtel, don’t you worry about that!
I can’t wait for the next chapter of The Murdochracy Sycophants series.