Forgive and Abetz. Tasmanian Liberal Senator and world’s oldest 59-year-old Eric Abetz has been one of the most prominent voices for failed opposition to political campaign in recent months. He railed against Victoria’s voluntary assisted-dying legislation, and was a leading No campaigner during the marriage equality debate, only to see both succeed over his protestations; following the Yes vote, Dean Smith’s marriage equality  bill swanned through the Senate unamended, and the VAD, though it suffered a more torrid time, got through the Victorian Parliament. It’s almost as though the point of view he represents isn’t all that relevant any more. And it appears his library has come to reflect that: about the address press yesterday, he set down an appropriately titled book, which Eagle-eyed Fairfax snapper Alex Ellinghausen spotted. It was a collection of (what else) “Puritan devotional readings” called Voices from the Past. 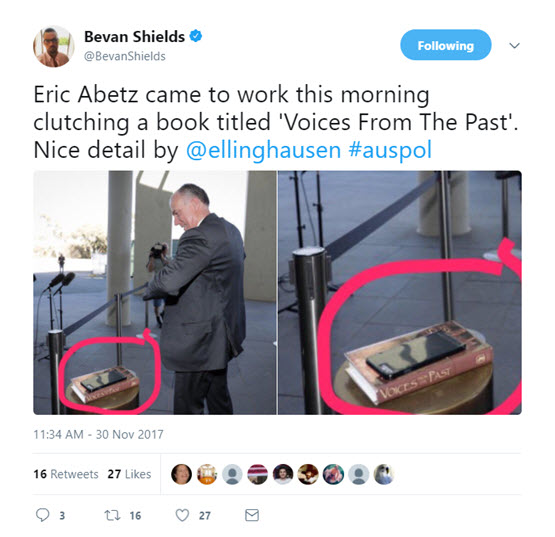 Greens’ own goal. A troublesome online advocate has left Victorian Greens MP Sam Hibbins red-faced. After Labor and the Coalition blocked his bill to free up AFL grand final tickets to members of qualifying clubs in September, the Greens member for Prahran called for any government or opposition MPs to give their free tickets to punters instead. While that’d absolutely be a fair cop, turns out Hibbins may have been upstaged by a colleague; open government advocate William Summers discovered today that fellow Greens MP Ellen Sandell listed a grand final ticket, gifted by Melbourne City Council, in her register of interests for November. Her seat might belong to the voters of Melbourne, but her heart belongs to Tigerland.

Dark arts at Craft? Not everything is golden over at craft and design non-profit Craft Victoria, with rumours swirling that they have lost their second CEO, as well as one interim CEO, in as many years. An anonymous tipster tells Crikey current CEO Melissa King has resigned mere weeks after the 47-year-old Craft opened a rather stunning new space in Watson Place. King took over from interim CEO Jane Smith in July 2017, who, in turn, was appointed after long-time CEO Jane Scott left for unspecified reasons in August last year. The same tipster claims that staff turnover has been a problem along with membership and revenue. Craft Victoria did not return Crikey’s requests for comment, but we can confirm their media contact left sometime this year (and Ms Tips would like to again apologise for bothering them on their day off).

Razer Sharp. Marx apologist and cat-lover Helen Razer had a bit of a do at the Wheeler Centre Wednesday night to celebrate the life and work of Engels’ best mate and, as it happens, her recently published book on the same. She was joined by Alyx Gorman, Max Gillies and Nazeem Hussain.

Much like an episode of Outsiders, the evening ended with a furious older man gesticulating wildly at a half-confused audience, who felt sure they were being threatened — but weren’t exactly sure with what. The man took great umbrage at Razer’s (frequent) use of naughty words throughout the evening, and suggested that were Razer to use such language in a dinky-di commie state, she’d be sent straight to the gulag. He cited China and Saudi Arabia, the Islamist absolute monarchy — and forgotten domino of the Middle East, apparently — as examples.

Please clarify whether the “furious older man gesticulating wildly at a half-confused audience” was one of the ovarily challenged on stage.
Pleeeez!
Get orfff my boomer lawn!! As for you bloody clouds….

Abetz has been irrelevant for at least 60 of his 59 years. Who is it down here that’s voting for the fossil?

I saw the question asked, “who votes for Erich Abetz? The answer is practically nobody does. You see he is numero uno on the Liberal Senate ticket and as such is a shoe in. The question should be, how does he get the number one ticket?

Inbreeding? As Great Gough once remarked of weddings in the Merkin Isle, “one meets fewer sets of parents”.