Milo Yiannopoulos is not only a symptom of the desperate state Western conservatism is in, but a carrier of the disease that’s killing it, writes Guy Rundle.

The last time I saw Milo Yiannopoulos – from a distance – he was careening around the bar-tents at the 2016 Republican convention in Cleveland, belle of the monsters’ ball. (He had leftie journalist Laurie “Red” Penny in tow for a while, something she used to brag about, but on which she is now vewwwwwy vewwwy quiet).

They couldn’t get enough of him there. Shark-grey suited DC operatives and barge-size mid-western rubes in stars and stripes shirts alike, they were charmed and enlivened by the political Peter Pan act, the platinum blond hair, teardrop glasses, sometimes a tailored suit, sometimes a white shirt open to the waist.

The operatives thought of him as a useful troll. The rubes couldn’t even begin to understand what he was on about or where he was coming from. But they loved the hits at “ugly, lesbian” feminists and progressives, etc, and American progressivism is, well, target-rich in absurdities. He looked like a Bowie tribute act opening a Tulsa rodeo.

Now he’s in Australia, and out to shock and oh dear he doesn’t like our Opera House. Not the Opera House! Milo described it as a “carbuncle”. It was a borrowing from Prince Charles, but Milo is all borrowing. He’s Milo Wagner, middle-middle-class Brit boy, Cambridge dropout, looking at a life in shit-kicking journalism, until he created the “Milo” character with a bottle of Helsinki No. 12, and a dose of 20th-century reaction/futurism/fascism. Another man-made self on the end-of-the-line lecture circuit.

The “Milo” act works in the US because he’s so impossibly exotic to Americans, and because the culture war is between a right that is suffused with biblical literalism and a left whose call-out progressivism is simply Puritan religiosity with a secular makeover. On the US right he is, or was, pure trickster, licensed to perform. Had he turned up in their towns, they’d tie him to the back of a pick-up, and drive until he was nothing but femur.

In Australia, well, we’ll see. His shows are proving popular, but the venues are yet to be revealed — so we don’t know what size venue Milo can sell out. The audience will be worth scoping out too: not the IPA chino-Taliban and their pearl-clutching sister-wives, braying about the “freedom agenda”, one suspects, nor the hi-viz gumbies of Patriot Blue and other groups.

More likely, it will be overwhelmingly a certain type of young man: students, low-grade professionals, those of the vast suburbs, found amid the intersecting circles of libertarianism, men’s rights, UFC fandom, conspiratorialism, ketogenic workouts, motivational training, a subculture that smells of Dencorub and recently expressed semen, and tastes like a protein bar.

It’s all energised by the distinctive mix of triumphalism and ressentiment, the old hard-right double game. We are lions! But somehow held at bay by lesbian feminists/affirmative-action promoted POCs/Jews. How did they break us? The flow to conspiracy is inevitable. There’s a type of Milo-enthusiast who started with abs training, and six months later thinks the Pelagian heresy is responsible for 9/11 and low testosterone. It’s all a gateway to anti-Semitism/Jew-hatred, right-wing smack.

Whatever else he is, it barely needs saying that Milo Yiannopoulos is not only a symptom of the desperate state Western conservatism is in, but a carrier of the disease that’s killing it. The movement is so jaded, so defeated, so deprived of a real social base, that nothing in its own belief system can revive it. Conservatism, to be a real social movement has to prioritise a certain set of personal values: moderation of public expression and behaviour, concrete traditional values, grounded in a genuinely religious outlook, sexual continence projected, the centrality of the biological family.

Milo is a gay man with a husband, who calls Donald Trump “Daddy”, talks of his own experiences of sex as a young teenager with adult men in positive terms (and argues that young teenagers can meaningfully consent to such), was banned from Twitter for racist abuse of a black actor, and, as recently revealed by BuzzFeed, promised hard-right anti-Semites that they “would like” an article he had written on the roots of the alt-right. He has raised funds for scholarships for “young white men”, that have never appeared, and “organised” a free-speech conference in California, which collapsed in chaos before it was ever held.

Conservative? He’s a nihilist-anarchist whose very presence at its centre destroys the possibility of conservatism advancing a moral-political line — but he is also necessary to it, because it has no energy of its own. His interviews with figures like Mark Latham and Andrew Bolt have a touch of the “daddy” themselves — exhausted men, dead inside, momentarily revived by Milo’s insouciance. Meanwhile, he’s turned “Planet” Janet Albrechtsen into the country’s oldest, still-operating, embarrassing “fag hag”. She dances round Milo like a second-year arts student dancing round her handbag at a Midsumma launch.

Protest him, don’t protest him? All personal taste I think. The very fact that he’s here, after the Australian right has spent months saying that marriage equality will see people marrying goats, is a net loss for them. They have not the slightest consistency about what they believe, and that is increasingly visible to a wider public with little interest in politics. Their hell week of state losses, byelection losses, and legislative defeats should tell them that they have lost the culture war here through narcissism, hysteria, dilettantism and delusion. Which Milo pretty much personifies. The boy himself? OD at 33, or campaigning in Hillary ’24 a couple of years later. 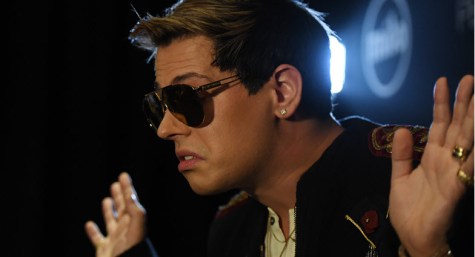 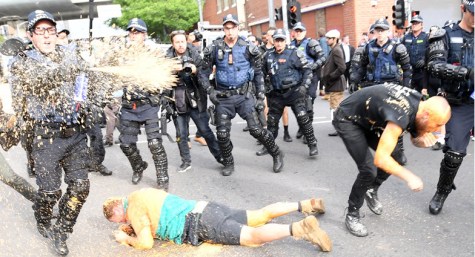 Rundle: at the Milo extravaganza it was hard to tell who was confused and who was just stupid

I first became aware of this guy during the dreadfully boring “gamergate” stuff and he has continued to bore me ever since.

Will
Reply to  Draco Houston

He shouldn’t. He’s a professional clown on the make. His prize act is to say, if you’re gay and not fascist, you’re the bore. When he says, “How can I be called a racist? I’ve had more black **** than the Kardashians,” he’s utterly, hilariously, maligning gay men everywhere. I agree when Guy says hosting Milo shows Oz right wingers couldn’t actually care less about conservative values. But I don’t follow Guy in believing that this is evidence that the right has lost the culture wars. I think those wars are entering a new fascistic phase, about pursuing power for power’s sake. In that Milo’s performing the role shock trooper, his part being to reconnect male homoeroticism with tribalism and combat. That shouldn’t bore; that should enrage.

Still as quick with the news as ever isn’t he

Guy, Master Milo was not “careening” around any bar-tent, but he may well have been careering. North Americans think “careening” is a cuter variant of careering, but an Australian writer knows that Lieutenant James Cook CAREENED the Endeavour for repairs after hitting the reef, and Sydney people know that boats were run ashore for repairs in CAREENING Cove.

Why did the world ever pay any attention to this professional troll? He doesn’t really stand for anything, he just has an insane craving for attention.

You’re a hard marker, grundle, but fair.
“He looked like a Bowie tribute act opening a Tulsa rodeo.”
BTW, did you mean “OD at 33 and campaigning for la Klingon in ’24…”? Seems a reasonable career trajectory.
Red neck know-nuttins are for the Drumpfster, and closeted, fag-fearing Nazis overlook Milo’s paeans to fellating black big jobs.
To steal from PT Barnum, “nobody ever went broke underestimating the public”.

Yes, I think that what links Yiannopoulos, Bolt, Latham, Albrechtson and many modern rightards, is a thoroughly indulged and out of control narcissism. They’ve all been gifted platforms, to foist their special insights on to the general population. Since narcissists are largely insensitive to the needs and feelings of others, these insights are usually big on slagging off those who don’t have privileged media access, but short on constructive ideas. Once these insights generate the criticism that they deserve, the other chief component of the narcissist swings into action. That is, since they have a highly inflated view of their own worth, they tend to view criticism as totally unjust, and they then descend into a whiney, petulant paranoia.
For instance, in regards to climate change, their arrogant pronouncements tend to be poorly researched regurgitations of corporate spin. When these opinions are refuted, instead of doing better research or constructing more reality based arguments, they invariably go for the conspiracy theory, in which the world’s climate scientists and various government agencies, are allegedly doctoring data to a massive extent. And I do think that the narcissism of so many modern rightards, has fashioned a mode of communication, that oscillates constantly, between arrogance and victimhood, with pretty well nothing in between.