The general consensus is that George Brandis' speech on Marriage equality was perfectly pitched -- erudite and heartfelt. But his record as a public speaker is sketchy.

Is there any politician who has a more tempestuous relationship with the English language than our Attorney General?

We spoke to Ginger Gorman, journalist and co-founder of Media Bootcamp, which trains people in public speaking and media appearances and asked her to assess George Brandis’ record in public speaking. Results reveal he makes for a patchy student.

This speech was a fine one. Firstly, he owned the message. He claimed the social reform of marriage equality as a conservative idea, whether or not that’s true. Secondly, he spoke with deep emotion and conviction, which is often missing in public discourse. Brandis is a long time supporter of LGBTIQ folk and is part of the Parliamentary Friendship Group for LGBTIQ Australians. So his conviction is believable. Thirdly, he put the conversation in an interesting historical context. He spoke directly to us as human beings — and especially to young, gay Australians. At Media Bootcamp we’re always telling people to know what they want to say and to be authentic — he did both those things. He also made us — as individuals — feel we are part of history. He brought us with him.

In terms of crafting a powerful, public speech it was perfection for those reasons. He also delivered it in a compelling way. He used interesting, colorful quotes and spoke with emotion and confidence. He used a warm and convincing voice and warm and convincing language. When you are public speaking, it’s crucial to be human and be likable. In this speech, he was both those things. He used his training as a barrister — it was well researched and thought through. Preparation is also key to a great speech!

This was the complete opposite of his SSM speech. Firstly, he appeared unprepared; something we stress at Media Bootcamp — you MUST put in the prep. He didn’t actually appear to know the basics of the subject matter. If you don’t understand the topic, you won’t be able to explain it to an audience. Simple. So the message here is: Don’t skimp on the prep! When you are speaking in public, you need to skip the jargon and give clear, concise explanations. He did neither of these things, as if some media minder had briefed him — badly — before the interview and he failed to retain the info. In contrast to his other speech he appeared ill informed, inauthentic and bumbling. It was a disaster. Australians are very worried about privacy. The terrible way Brandis handled this interview served to exacerbate those concerns, not lessen them.

In terms of his body language and diction, he said “um” quite a few times and stumbled. Punters view this kind of speech and body language dimly and, perhaps rightly, draw their own conclusions from that. Well to me this is the classic yin-yang of public speaking. We’re all capable of amazing public speaking. But we need to do our prep, know what we want to say, practise beforehand, stay calm in the moment and be authentic. If we don’t follow those simple rules, you can see what happens.

In August 2017, One Nation’s Pauline Hanson rose in the Senate, shrouded in a black burqa that she theatrically swept off, to ask Brandis about banning the garment, his response drew a standing ovation from both sides.

I found his response to the burqa stunt quite amazing — purely because he didn’t have time to prep. So his response was straight from the heart and straight from the top of his head. It showed he was an experienced orator because he responded immediately and without prep. And the response went in hard. He said “we are not banning the burqa”. It was clear and unequivocal — something we as human beings love when others are communicating with us. He was precise and gave credible statistics and background information — but not too much (that’s also a key in good public speaking). The emotion is his voice at the end showed he really cared about the issue. This made him come across as believable and authentic.

He explained the contribution Australian Muslims make to law enforcement and intelligence. However, he left himself open to accusations of using Muslims for intelligence purposes only and ignoring their other contributions to the richness of the community. So he loses marks for that. However, because he didn’t prep this speech, it remains quite impressive.

It’s a fine balance. We don’t want to see someone ranting and raving and out of control, because it can undermine your message and make you less believable. But showing you care? That’s what’s often missing from the cynicism of modern politics. We are all human and we want to connect. 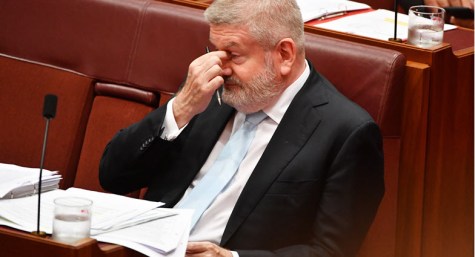 Ms G/G has a lot to answer for if this analysis is any indication of the training she gives.

I would accept all of the above if each paragraph started with, “despite his patronising manner, which is probably the true Brandis…”