Staff at Huff Post Australia will find out today if they've been made redundant after the website announced the end of its joint venture with Fairfax Media.

Huff Post Australia staff face cuts. Staff at Huffington Post Australia will be finding out today whether they’ve been made redundant after the global news website announced yesterday it was ending its joint venture with Fairfax Media as part of the company’s global strategy. The local branch launched two years ago under editor-in-chief Tory Maguire, who tweeted yesterday that she’d need a day or two before finding the next challenge. A spokesman said the site would continue to be maintained from December 1, when the joint venture will have officially ended, with a smaller team. He said that the company would redeploy staff where possible, but redundancies could occur.

Editor Chris Paine tweeted that he’d populated the website with some of the best work from the past two years while it was still “A Thing”, and journalists Karen Barlow and Anthony Sharwood both tweeted their “last stories” for the site yesterday.

BuzzFeed, ESPN slash jobs. Overseas, even more job cuts have been announced. BuzzFeed is cutting 100 of its global workforce of 1700 employees as revenues fall short and it looks for new sources of income, and US sports cable giant, ESPN is sacking 150 TV production and digital employees to cut costs. The cuts from both companies have been expected as revenues in digital media change (gobbled up by Facebook and Google) and cable TV faces falling subscriber numbers, weak revenue growth and changing viewing habits.

A memo to staff from BuzzFeed founder Jonah Peretti said: “As our strategy evolves, we need to evolve our organization, too — particularly our business team, which was built to support direct sold advertising but will need to bring in different, more diverse expertise to support these new lines of business.” BuzzFeed’s cuts will fall on its news and commercial operations in the US and UK.

The company will make cuts across the US business team including sales, marketing, ad solutions and client services. In the UK, BuzzFeed is reorganising to focus on content for global audiences and its core UK news beats.

BuzzFeed had been on US broker lists to float on Wall Street earlier this year but its revenue performance has fallen short now in the past three years. — Glenn Dyer

‘We cannot rewrite history’. Nine has set up a helpline and free counselling for former employees who have “grievances” following the allegations of Don Burke’s behaviour, CEO Hugh Marks has told staff in a memo reported by Fairfax. Marks also said there was a zero-tolerance attitude to inappropriate behaviour at Nine. “As much as we might like to, sometimes we unfortunately cannot rewrite history. In light of the appalling allegations this week of sexual assault, harassment and misconduct by Don Burke I wanted to write to all staff to reaffirm Nine’s commitment to maintaining a culture that is inclusive, supportive and respectful,” the email said.

Everyone dominated the Walkleys. Last night’s Walkley Awards recognised the best journalism over the past year — Fairfax’s Michael Bachelard and Kate Geraghty won the Gold Walkley for their coverage of Islamic State in Mosul. But it’s some of the newspaper reports today heralding staff wins that caught our eye, and, in particular, the Daily Telegraph and The Sydney Morning Herald‘s claims their reporters “dominated” the awards: 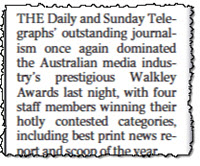 For the record, the Tele and its sister papers won four categories, while Fairfax Media took out 10 categories, as well as The Age‘s former political reporter Michael Gordon being awarded the outstanding contribution to journalism award.

More high-profile US media sackings. One of US morning TV’s most popular hosts is the latest to be sacked in the wave of sexual harassment reports in the US media. Matt Lauer, the long-time co-host of NBC’s Today show has been fired by the network — a move that had been anticipate with The New York Times and Variety both reported to have been working on stories about his behaviour. Lauer was sacked late on Monday night after the network received a detailed complaint from a colleague about inappropriate contact in the workplace. The New York Post has since reported that Lauer allegedly assaulted a female NBC staff during the 2014 Sochi Winter Olympics.

Glenn Dyer’s TV Ratings. Seven’s night easily. Nine took out the trash and its line up stank accordingly. After solid efforts from the News from 6 to 7pm (1.16 million national viewers for the 6.30pm part after 1.13 million for the 6pm segment) and then A Current Affair (1.09 million), the trash appeared. The UK version of The Voice — not the adults, but the kids – 636,000. Then Victoria’s Secret models for an hour until 10pm, just 367,000 national viewers. At 1 pm a program called Movie Juice snatched 72,000 desperate souls. And at 11.30pm a program about an Australian Firemen’s Calendar was knocked down in the rush of 38,000 national viewers. That was for an hour. Why was this stuff put to air last night? Seven and the ABC at least tried with new programs. Hard Quiz ended with a solid 906,000 people nationally and Instant Hotel ended with 985,000.

Ten did very poorly — a main channel share of just 8.7% in the metros. It dropped Jamie’s Superfoods at 7.30 and dropped in an episode of Cram in its place, which went south — just 434,000 nationally and 290,000 in the metros, beaten by The Kids UK Voice on Nine. Viewers of Ten will have to confront another episode of Cram tonight at 7.30pm. And Ten says it is coming back in 2018!

“Reporting” the Walkleys? What great examples of ‘fake news’?

Until this reporting about the end of the HuffPo-Fairfax joint venture, I had not even remembered it existed. I cannot remember the last time I clicked through to a HuffPo Australia article. It probably doesn’t speak well for them that an online denizen of Australia of the sort who reads Crikey and the Guardian and a lot of Twitterers… never finds themselves reading a HuffPo article not intentionally but because their content is not being circulated, not making waves, the website clearly had no profile at all in my circles.

Despite only being about 12 years old, the mention of HuffPo is almost nostalgic anyway, like MySpace or Yahoo, an artifact of an earlier incarnation of the world wide web and social media and a radically different stage of US politics and pop culture.