The legendary AC/DC guitarist, whose funeral was this week, was remembered as a loyal and loving artist.

To his millions of fans, he was the best rhythm guitarist in the world, but this morning Malcolm Young was remembered as a devoted family man, a tea-drinking serial capsizer of boats and a loyal collaborator with his music label of more than 40 years, Albert Music.

On Tuesday, the Young family and the Albert family turned out in force to farewell the 64 year old musician, whose distinctive, hard-driving sound was the backbone of Aussie rock powerhouse AC/DC. The traditional Catholic funeral was conducted by Monsignor Tony Doherty — Sydney’s most erudite Catholic priest — at St Mary’s Cathedral with the Cathedral Choir singing “Amazing Grace”, “the Lord is My Shepherd” and “Jerusalem”. It wasn’t until the Scots College Pipes and Drums Band, marching in front of his hearse along College St, struck up the first chords of “Long Way to the Top” that we heard a note of the music for which he was famous.

The Youngs are extremely private and despite the vast dimensions of the cathedral, it was an intimate family affair. The few outsiders who came included former band members of AC/DC Brian Johnson and Cliff  Williams, together with Rose Tattoo front man Angry Anderson, nephew and guitarist Stevie Young, Jimmy Barnes and The Angels’ John and Rick Brewster.

Little brother Angus, the youngest of the eight Young siblings and AC/DC lead guitarist, carried Malcolm’s beloved Grech guitar during the service. Touchingly, at the end of the service and despite his obvious distress, Angus walked down the aisle of the cathedral on the arm of Malcolm’s son, Ross, to acknowledge the fans clustered in the back pews. It was a small gesture that meant the world to the fans, many of whom had travelled a long way to farewell their hero. 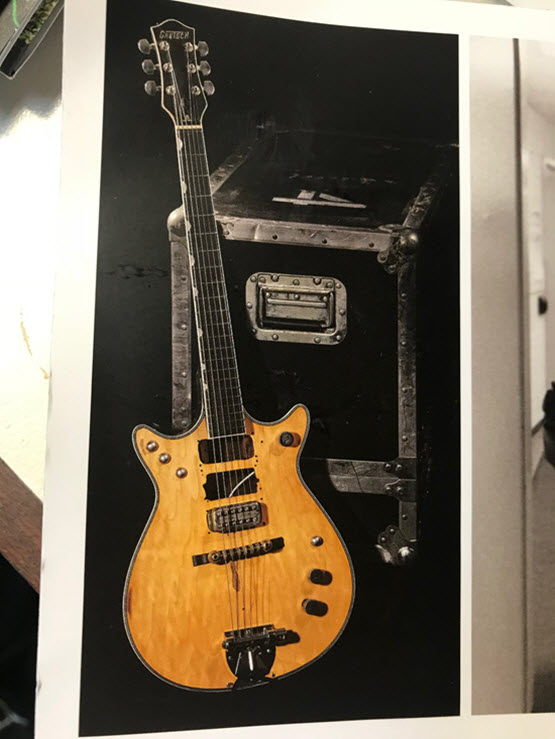 The first eulogist was nephew Bradley Horsburgh, who said that Australia, where Malcolm met his wife, O’Linda, became the meeting point and ultimate home for the extended family. Every New Years’ Eve they would gather at his East Balmain home for the fireworks, with Malcolm making sure that every single person had a good vantage point. This meant standing on his toes in the background, a skill he had mastered on the concert stage, he said. (Young was only 5’2”.) The rocker was also famous for capsizing boats, from fishing tinnies right up to catamarans and had lost too many anchors  to count.

Despite his wealth – the two Young brothers own houses all over the world – Malcolm had always had a firm grip on his working-class roots and thought that “fame and fortune were meaningless without taking the time to enjoy the simple pleasures of life.” He liked to buy his uniform – jeans and black t-shirts – from discount store Gowings, he said. When the band was inducted in the US Rock n Roll Hall of Fame in 2003, they had to relax their black-tie dress code as the band insisted on jeans.

Once, Horsburgh said, over an early-morning cup of tea, Malcolm had told his nephew, “there will always be people trying to tear you down and you can tell them just to go and … well, I don’t want to say these words inside a cathedral.”

The second eulogist was David Albert, nephew of legendary music producer and publisher Ted Albert, who first met Malcolm after signing up his brother George’s band The Easybeats in the early 60s. Albert paid tribute to AC/DC’s incredible success, saying that they had sold more than 200m albums, been streamed more than 1 billion times and won countless ARIA, APRA and Grammy awards. Their 1980 album, Back in Black, is the second biggest-selling album of all time, he said.

The band played its first gig on New Years Eve 1973 at Chequers nightclub and from the outset Malcolm had had a vision for the future, he said, with a “sharp business mind and a gift for songwriting and guitar playing.” Ted signed the band in 1974 and it stayed loyal to Albert Music; the family would always be grateful that it chose to stay with the company after Ted’s death in 1990, David said.

It was a beautiful service – how many artists get to be farewelled by a loving, united family and fans ranging from eight to 80? – and it brought back a few memories. Sometime in the late 70s, my friend Di and I went to an AC/DC concert in regional Queensland and were invited backstage. After hanging out with the band (Angus was drinking milk out of a bottle and eating Smarties, I remember) we declined their offer to go back to the hotel and asked for a lift home. Like perfect gentlemen, they signed our concert tickets, kissed us rather chastely and deposited us on the doorstep of Di’s house. The bad boys of rock and roll? Not the Young brothers.

Beautifully written Margot. I have tears in my eyes, 64 is too early to check out. How cruel is dementia…. It made watching the Easybeats biopic even more poignant given that George also died a month earlier. Such a talented family!

Thanks so much Jenny. The Easybeats series is amazing, isn’t it – Part 2 this Sunday!

On 15 August 1974, I went to a Lou Reed concert at Festival Hall in Melbourne. The support band had no name on their drums and we didn’t have a program so had no idea who they were except they were from Sydney. They played a terrific set and had the place jumping by intermission. In fact, I recall my mates and I remarking that if Reed were taken ill we would be quite happy to see another set from that band, whose name we still didn’t know but we did note the lead guitarist’s gimmick of a schoolboy cap and shorts. http://www.milesago.com/tours/reed.htm

Stevie Wright and AC/DC before Lou Reed, what a night! And thanks for introducing me to milesago.com – looks great

Thanks for this glimpse inside the farewell service Margot. The Young story is a fascinating one.

The Bon Scott era still remains their finest for me but there’s no denying that AC/DC has been among Australia’s best for four decades. It’s great seeing their old clips & interviews on the Countdown highlights.

I agree with you! I’ve also enjoyed the interviews on Classic Countdown.

What a legacy the Youngs and Alberts left in Australian music. I doubt we’ll see the likes again. Must see TV on iview is “Long Way to the Top” and “Blood + Thunder”.