Fairfax's Domain lift-out carried a story featuring an advertiser as its case study this weekend. Could we be seeing more of this now it has been spun-off?

A sign of Domain’s future? Could this be a sign of what’s to come for Domain, since Fairfax spun off its property section last week? In the newspaper lift-out over the weekend was a story about buyers’ preference for older-style apartments over new builds, using for its case study a property advertiser (with a profile on the Domain website), Andrew Harlock, and his son Angus. We look forward to seeing how the newly floated outfit approaches reportage in the future.

Nine puts the boot in. Nine never does its election coverage by halves, and Saturday night’s Queensland election special was no exception. This year, to illustrate MPs getting booted from their seats, a digital robot, “Wally the Maroon”, took a run-up and kicked a football emblazoned with the face of the losing MP. 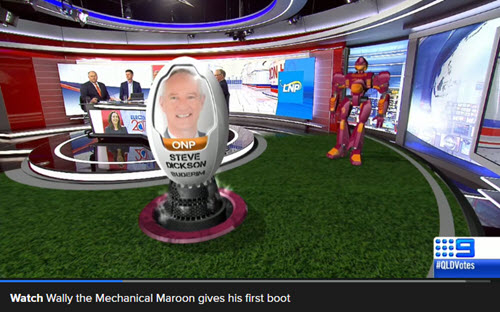 But at least they had the right photos — the ABC’s team got state MP Robbie Katter mixed up with his father, maverick federal Senator Bob Katter. 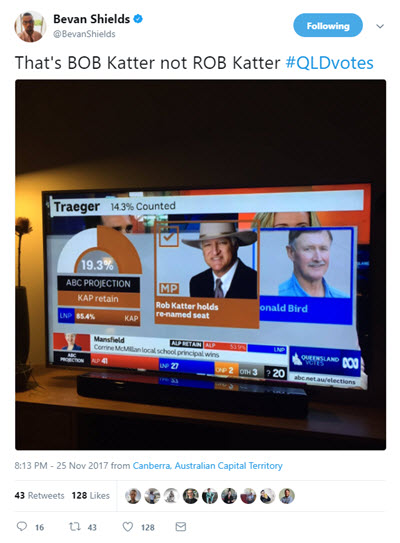 NYT’s Nazi profile backlash. The New York Times has faced a widespread backlash after publishing a profile of a Nazi over the weekend, accused of normalising neo-Nazi views and behaviour. The Atlantic published a satirical response called “Nazis are just like you and me, except they’re Nazis”, and The Times‘ national editor and the reporter have both written reflections on the criticism. 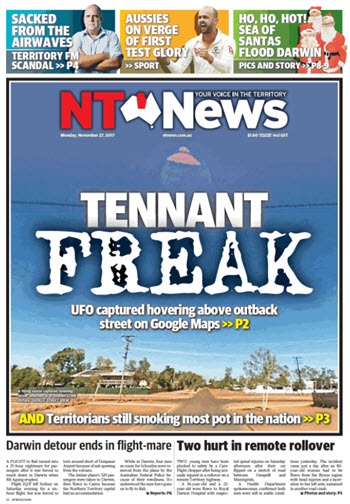 “Why does Trump care so much about Time — a magazine that, like all national magazines, has been hit hard by the fracturing of the media and the changing advertising landscape? Because all of Trump’s ideas about the media were formed in the 1980s. And at that time, Time was a massively important part of the culture. It was a tastemaker — and breaker. And, most importantly for Trump, it had a cover. A cover that, if you were on it, signified success in the broader culture.”

Glenn Dyer’s TV Ratings. Last night’s ABC line-up — the doco on the musical version of Muriel’s Wedding, the first part of the Easybeats biopic Friday on My Mind  and then the first part repeat of Blood and Thunder, the wonderful documentary of music legends Albert Production — was one of the highlights of the year. Friday On My Mind averaged 709,000 nationally, Muriel averaged 618,000 and both deserved more.

Nine’s broadcast of the first Test did well all day with more than 1.7 million nationally for the third session when Australia’s winning position became clear. There were 1.1 million metro viewers and just over half a million in the regions. In the morning Insiders dissection of the Queensland election and the rest drew 579,000 national viewers, its second highest for the year from (a very scatty) memory.

Emily got it wrong too! Bob Katter is the MHR for the Federal seat of Kennedy, he is not a Senator.

Yes but why? How?

The Curmudgeon
Reply to  Peter Wileman

You beat me to it, Peter. How DOES this happen? Explanation, please.

Trump’s obsession with Time is entirely appropriate in the historical perspective. Sometime in the early 1980s I came across some early 1930s editions of Time magazine in, of all places, the Cuzco markets in the Peruvian Andes. One of them featured Stalin on the front cover as ‘man of the year’ and there were a number of feature articles on Lenin, Trotsky, and Hitler, all portrayed in a relatively sympathetic light.