Without a candidate of their own, Liberal voters turned up to contribute to the Greens swing in Northcote writes Charles Richardson.

There was some discussion in the media recently on the fact that results of the same-sex marriage plebiscite showed a gap between the opinions of Liberal Party voters and most of their representatives. Safe Liberal seats almost all returned big majorities for Yes, even when their MPs were strongly of the opposite opinion. In the most striking case, Tony Abbott’s electorate of Warringah voted 75% in favor of marriage equality.

There’s been less attention paid to the revelation of another gap between the official Liberal Party attitude and the views of its supporters on another issue, that of giving preferences to the Greens.

Since Ted Baillieu started the practice in the 2010 Victorian election, the Liberals have officially directed preferences to the ALP ahead of the Greens in seats where the two are competing. Typically, more than 70% of Liberal voters follow the how-to-vote card, giving an invaluable boost to Labor.

But last Saturday, in a by-election in the Victorian seat of Northcote, there was no Liberal candidate, so Liberal voters were left to their own devices. Some just stayed home, but it looks as if a significant number turned out and voted for the Greens, either directly or via preferences from one of the independents.

The graph below shows the two-party-preferred swing to the Greens at each polling place on Saturday, plotted against the strength of the Liberal vote at the last state election. The correlation is unmistakable. 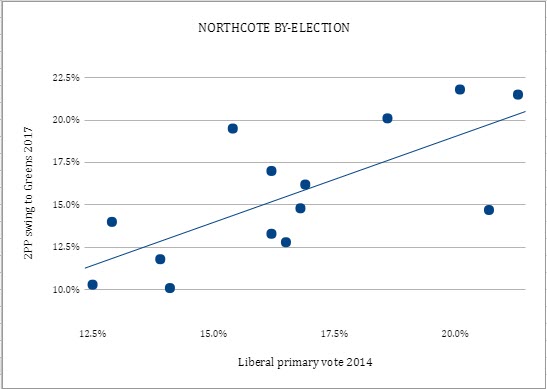 No doubt there were other things going on in Northcote as well. But it seems that part of the explanation for the Greens’ victory — they took the seat from Labor with a swing of 11.7% — is the fact that Liberal voters prefer them to Labor rather more than their leadership (at least officially) would like.

Nor is this surprising. In places like Northcote, Greens and Liberals are pretty obviously competing for the same sort of voters.

Part of this is about class: Liberal and Green voters are more affluent, less likely to identify with the traditional working-class unionist ethos of Labor. Demographic change in the inner suburbs is making Labor’s task harder.

But there’s more to it than that. In these suburbs, Labor is the establishment, and its machine politicians are seen as complacent and out of touch. Despite their different perspectives, Greens and Liberals both appeal by contrast to the educated, the idealistic and the socially engaged.

There’s some consolation here for Labor, in that it reinforces its claim that the Greens are fundamentally a middle-class party (although the fact that this critique is made by tertiary-educated apparatchiks rather than factory workers tends to diminish its force). For the Liberals, however, their relationship with the Greens is a big headache.

The main game for Liberal leaders is to beat the ALP, but — as the same-sex marriage vote showed — they also need to placate their own ideological warriors. And they want to do everything they can to sow dissension between Labor and the Greens, in the hope of limiting the flow of preferences between them that threatens to unseat Liberal MPs.

At last year’s federal election, News Corp was telling Liberal voters of middle-suburbia that the Greens are crazed Marxist extremists, but the narrative has not universally taken hold. More than ever, the Liberals need to work out just what sort of party they want to be.

*Charles Richardson lives next door to Northcote, and he handed out how-to-votes and scrutineered for the Greens candidate on election day.

The Liberal establishment’s problem is that it’s harder to scare well-educated voters with silly slurs about extremist Marxists etc; especially when Di Natale is quite obviously not terrifying to anyone other than Labor Party strategists.

There is nothing “curious” or “strange” about close relationships between Greens and Liberal voters. I live in a suburb (inner west of Sydney) where both groups co-exist happily, and are basically identical. I certainly can’t tell them apart. They are wealthy enough to live in Sydney’s most affluent inner city and waterfront suburbs, and they have identical lifestyles and aspirations.

My electorate of Balmain has had a Greens MP since 2011. At that election, the Liberals actually came first – but after multiple preference counts, the Greens inched into second place, and then collected Labor’s preferences.

The Greens also do extremely well on the North Shore, Northern Beaches and Vaucluse – usually bating the Labor party. In both Abbots and Turnbull’s electorates, they regally come second I expect to seeing a lot more Lib/Grn correlation graphs from now on in Crikey, especially now that the DiNatale forces have won in NSW, and ousted Lee Rhiannon.

Re your comment on Lee Rhiannon…I assume, therefore, that you are happy to endorse the ‘new’ candidate for the Senate in NSW?
I ask this because her husband had a long series of tweets published recently, which are patently unacceptable on the question of ‘white people’ in the community. Assuming that said candidate agrees with her husband, isn’t this a view more allied in reverse (anti-white as opposed to anti-muslim) to that of the PHONies?????
More evidence of right-wing tendencies in the Greens!!

CML, I suspect you are referring to Dr Mehreen Faruqi’s son – Osman Faruqi, the journalist for Junkee, whose tweets have recently been in the news in connection to his defamation action against Mark Latham, not her husband. And I’m not sure why you would assume her views align with those of her husband, or any member of her family. But then you are making a weird assumption about me too, one that is totally wrong. I am not “endorsing” anyone.

Dr Mehreen Faruqi, the NSW upper house MP who has now been pre-selected to replace Lee Rhiannon as senate candidate first has to get a senate quota in NSW, something that in NSW the Greens have not managed without the help of preferences. She probably will. Rhiannon and her allies in the NSW party has been retarding the Greens vote here for years.

The point I was making is that Greens and Liberal voters are basically the same people. Unique electoral situations (like the Libs not standing) are a factor, but in general the Greens can only win seats where lots of rich boomers live (Prahran, Balmain, Newtown, Melbourne, Northcote), or where they retire to (around Byron Bay). Tell me I’m wrong…

Where did the ‘son’ get his ideas from, if not influenced by family? Makes no difference…unless the Greens candidate comes out and denounces her son’s views, I think this reflects VERY BADLY on the Greens.
I wouldn’t vote for anyone with raci+t family members!
As for the NSW Greens…better the devil you know…and I don’t live in NSW, so this is just a general observation.
Teddy…sorry if I have taken your former comments the wrong way…and also for the ‘husband’ rather than ‘son’ mistake. I’m not that interested in Greens shenanigans, but those tweets might just as well have come from an alleged terrorist suspect…no doubt someone will be keeping an eye on the ‘author’ of same, and rightly so!!

Oh come on CML,be honest. You being you,if you had to chose between voting for any kind of Greens candidate and an ALP candidate who had racist family members as well as being an axe-murdering,child molester …the ALP would still be getting your vote.

At first glance of the results in inner city seats like South Brisbane and Maiwar in the Queensland election seems to show larger swings against the the LNP than the ALP that then go to the Greens. This seems to support Charles’s theory and also makes the ‘liberals on bikes’ description of the greens that some people use more accurate!

This article agrees with what I have said many times on this blog…the Greens are becoming ‘right’ wing, and you can’t be progressive and conservative at the same time.
That is an oxymoron!!!

I don’t see the Greens going right wing at all, and a bunch of Liberal voters choosing to pick the best chance against Labor in an election in which the Liberals aren’t running is hardly evidence that they are. Some may, in the absence of their usual party just decide to vote based on certain issues, like the Great Forest National Park (remember when there used to be Liberals For Forests?)
Furthermore, there is a tendency of the Greens to do well when there is no longer an incumbent Labor member, even at general elections when the Liberals do run (e.g. Melbourne), so clearly many Labor voters are changing to the Greens as well, and in a by-election like this it is wrong to assume that it is just the Liberal vote from the last election splitting between Labor and Green, there will be some Labor voters changing to Green, with their numbers covered by Liberal voters choosing to vote Labor in the absence of a Liberal candidate, so we don’t have exact numbers on how many erstwhile Liberal voters voted Green.

I’m not suggesting that the Greens are “becoming right wing”, for one thing because you’d first need to work out what that means. I certainly don’t think you can be “progressive and conservative at the same time”; I think the Greens are progressive, and I think a fair chunk of the Liberal voter base is as well. But then I don’t think there’s necessarily anything progressive about the trade unions.
“… it is wrong to assume that it is just the Liberal vote from the last election splitting between Labor and Green” – indeed it is, and I didn’t say that. My point is that the correlation between the previous Liberal vote and the swing to the Greens suggests that there is more of a preference to Greens among Liberal voters than you would think from just listening to the Liberal leadership. The correlation doesn’t prove that, but I think it’s fairly strong evidence.

Thanks for the reply Charles, in refuting the claim that the Greens were becoming right wing I was specifically taking issue with the comment above mine, not with your original article.

If Libs vote Green it does not suggest the latter are tory – it means that torys are not completely braindead and are able to see that the reeking hulk of the LNP is an affront to Heaven.