Safe Schools pamphlet fails to have the desired effect. The weekend’s Queensland state election looks to be a tight affair that will take days to decide a clear winner. A Crikey tipster, in the electorate of Mount Ommaney sent us some pamphlets they’d received a few days before the poll, promoting a website called kidsrights.org.au (not to be confused with kidsrights.org) and urging voters to put Labor and the Greens last. The reason? Safe schools, which is teaching your kids to be gay AND communist. The pamphlet warns:

Schools can decide that parental consent is not needed for a student to undergo irreversible hormonal treatment. 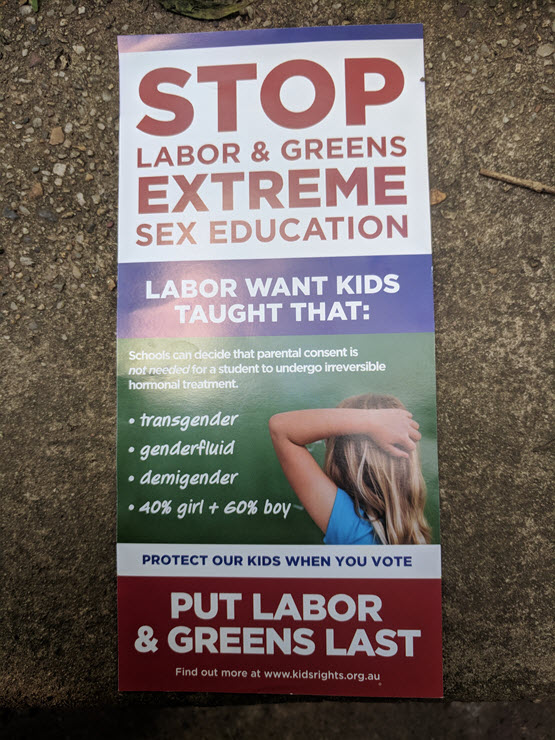 Wait, Labor wants that to happen, or it wants children taught that should happen? If that weren’t enough, it also throws some hard left politics into the mix, quoting Safe Schools co-founder Roz Ward: “I not only teach people how to be gay, I teach them how to be gay and communist. So invite me to your school if you will.” (she apparently said something to this effect at the Marxism convention in 2013). 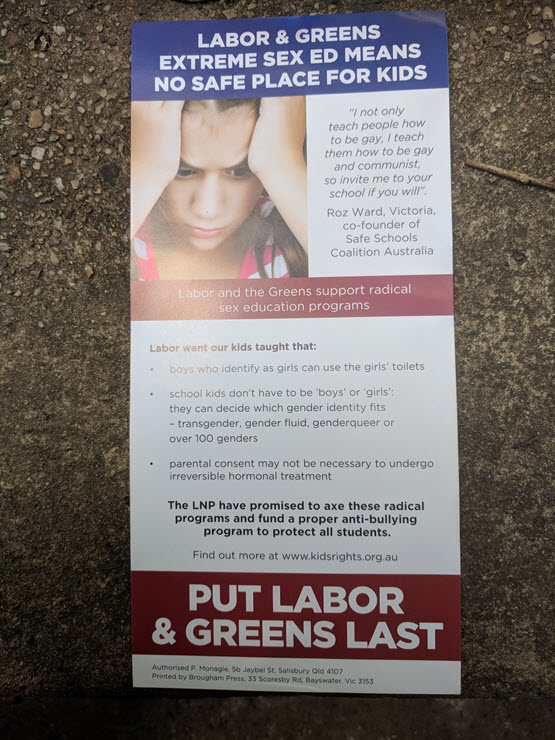 The pamphlet and website is the work of the Australian Families Association, which was founded back in 1980 by Crikey fave B.A. Santamaria. The pamphlet assures voters that the LNP have pledged to axe these “radical programs”.

It seems, however that the AFA will not be happy with the election result, at least in Mount Ommaney, where a redistribution and a swing looks to have delivered the seat back to Labor, with Jessica Pugh predicted to fend off the LNP’s Tarnya Smith.

Burke’s legal representation. Don Burke, the former Nine Network gardening guru has reportedly hired Patrick George to defend himself against claims published today in Fairfax Media and to be broadcast on the ABC’s 7.30 program tonight, that he is a serial abuser and harasser of women, many of whom were employees of his company. In addition to the above News.com.au story, The Daily Mail reported that George had said he was acting for Burke. George is a senior partner at the law firm Kennedys Australia.

Let’s hope he has a better run than the last time Kennedys was in the public eye in Australia. Following the revelations that systematic corruption of the Unaoil bribery story exposed by Fairfax and Huffington Post. Kennedys’ Rebekah Giles led a very vocal defense of her clients, arguing in The Australian that “The case of my clients the ­Ahsani family, owners of Unaoil, damned unequivocally in a Fairfax multimedia exposé self­described as the “biggest bribery scandal ever”, is a warning, and one the business and media community should heed.”

Fairfax Media reported, a year ago this month, that Giles “wrote earlier this month to Fairfax Media demanding that Unaoil “urgently” be given information about the sources who leaked documents that led to the media expose and prompted the police investigations. On November 16 this year, UK corruption investigators laid the first criminal charges in the Unaoil scandal. There has been talk of Unaoil suing Fairfax, but no lawsuit has yet been commenced.

The birth of the ACL. Australian Christian Lobby spokesman Lyle Shelton has not, as yet, withdrawn from the spotlight, despite the decidedly conclusive response of the marriage equality survey result. He is now campaigning for the protection of religious freedoms in this brave new marriage-equality-having world: launching the anti-porn, anti-abortion and anti-euthanasia Centre for Human Dignity at Enbloden17, the ACL’s annual conference, and most recently warning that the “freedom of speech of 5 million Australians would be wiped out by Christmas” following the appointment of Phillip Ruddock to assess Australia’s religious protections. With that in mind, Ms Tips thought it would be worth remembering what kind of religious freedom Shelton favours.

Shelton is the son Ian Shelton, pastor of Toowoomba City Church, which in turn grew out of the Logos foundation, a “dominionist” movement. A thorough and detailed piece on dominionists — who, according to former ACL head David Yates, a dominionist himself, seek to have “disproportionate” influence on politics and public life — and their links to the ACL, appeared on ABC Religion and Ethics back in 2011. The article compares the dominionist aim to impose religious sensibilities in the secular sphere to Sharia. We think that, given that Shelton and the ACL are planning to hang around for a while, it’s worth revisiting:

Joyce prunes Burke. In what may be the first of many attempts to distances Don Burke from one’s brand — News.com.au‘s national political editor Malcom Farr noticed that Don Burke’s praise for Barnaby Joyce — in particular his decision to move the Australian Pesticides and Veterinary Medicines Authority to Armidale in regional New South Wales — had mysteriously disappeared from Joyce’s Facebook page. 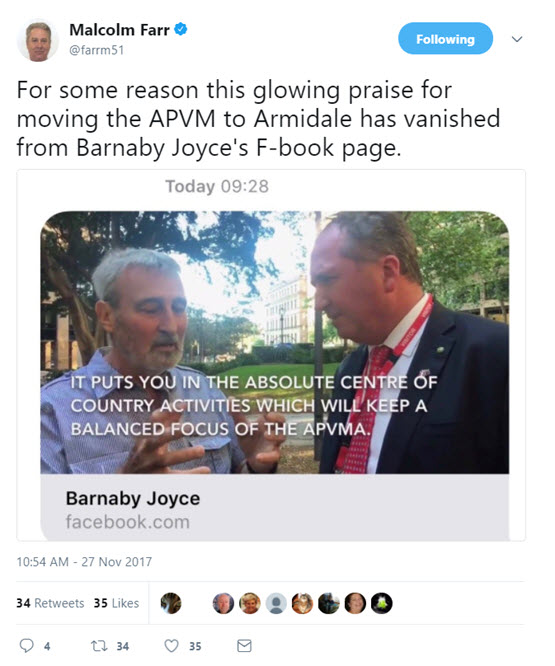 Thank Jobs for the WayBack machine.