Veteran journalist John Hamilton has been remembered as a deeply-admired writer by colleagues, having died after a long illness.

Vale John Hamilton. Herald Sun journalist and author John Hamilton has been remembered as a master of his craft, having died after a long illness. Hamilton covered the Port Arthur massacre, the Bali bombings, the 2004 tsunami, the Sydney Olympics and Princess Diana’s death. His former editor, Hun executive Peter Blunden has recalled Hamilton as being deeply admired by his peers over a 50-year career:

“He was always first pick to cover the big stories, anywhere in the world. He could always be trusted to produce work of the highest quality. John was a beautiful writer, but an even better human being. Urbane, intelligent, engaging … but so, so humble.”

Exclusive watch. The battle of the exclusives is usually reserved for The Australian and, well, anyone else. But it’s two Fairfax papers that caught our eye this morning, with both The Sydney Morning Herald and Australian Financial Review running the same story about a push by business leaders for the superannuation industry to increase their lending, with and identical photographs on their front pages today, but both with an “exclusive” label. 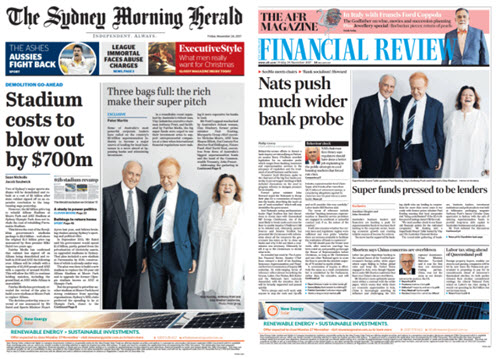 The revolving door. Walkleys Foundation CEO Jacqui Park is leaving the organisation, it was announced today. Park has been CEO since it was incorporated as an independent not-for-profit company in 2013, and she was previously the founding executive director. In a statement issued by the foundation, Park said the time was right to leave: “Having built the Walkleys as the heart of excellence in Australian journalism and having overseen its incorporation as an independent and financially stable not-for-profit, now feels like the right time for me to pursue a new adventure. This is a time of unprecedented change in news and journalism. There are real challenges and, most importantly, there are great opportunities. I’m excited about a new role for me in those opportunities.”

A new CEO is yet to be appointed.

Glenn Dyer’s TV Ratings. Test cricket started yesterday, summer is here. The broadcast, bad light, rain delays all combined to make it all a bit confusing for viewers. The final session audience (it finished at 7.16pm) was around 1.2 million (Nine was working out final figures — manually — at the time of publication). But over on Seven The Good Doctor again blitzed the night with more than 1.65 million national viewers and well over a million in the five metro markets. Gogglebox Australia ended its second season of the year with 788,000 nationally last night and 875,000 season average.  The Test running past 7pm boosted Seven News noticeably, especially in the metros where the audiences were up by 100,000 to 150,000 or so on previous Thursdays.

What fecking eejet would even think, let alone talk of, handing over ANY of our superannuation funds to the corporates for ‘long-term’ funding?
Do they seriously think we are all stupid? What happens when said corporates go broke and the Oz public ends up with a large chunk of their retirement funds missing?
The mind boggles!!!!!!!

Come on, it’s late November, not April 1st.
The Thundering Herd of Rhinohide, Pratt & the Fox advocating that they be lent our money?
In other news…..
Seriously? They already owe us big for inadequate taxation,