If the government wants to cut taxes, it should be like Labor or Tony Abbott

While insisting that Labor is the party of higher taxes, the government plans to hike taxes far above the levels even of Tony Abbott's government, let alone Julia Gillard's.

Let’s put the government’s thought bubble about tax cuts in some proper perspective. This is what the government has done and is proposing to do with tax collections, compared to what happened under Labor. Note that these figures, from this year’s budget, include the multinational tax heist that will cost $60+ billion in lost revenue over 10 years. 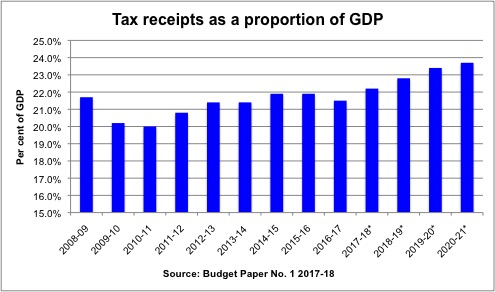 OK, so matching Labor is a little difficult, sure. But how about a more modest goal: cutting tax as a proportion of GDP back to where Tony Abbott and Joe Hockey had it? They averaged 21.9% of GDP in tax receipts. To get it back to the halcyon days of of 2015, the government would have to forgo $37 billion a year and upwards.

….. You mean Cormann has been playing fast and loose with the truth?

Amazing. They would have rolling in revenue by now, if they hadn’t axed the Carbon Tax. CT has to be installed eventually, adequately indexed upward for the intervening years.