Why does the Australian media love Amazon?

The Australian media has been buying into the Amazon love-in as it prepares to launch here, and it's not just the usual suspects.

As Australia prepares for the launch of online megastore Amazon, it’s had largely uncritical coverage in the press.

And it’s not just A Current Affair pushing the hype with free advertising, or Seven Sydney pushing the line that Amazon’s arrival will mean more jobs. 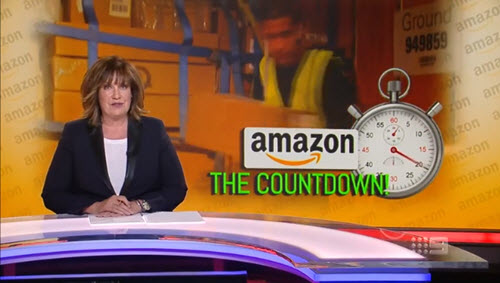 It’s been exclusives all around in the more serious media, too. The Weekend Australian pointed on its Saturday front page to an “exclusive” look inside the new warehouse in Dandenong, on the outskirts of Melbourne. The story, by reporter Eli Greenblat, compares the mystery and security around the warehouse to Willy Wonka’s chocolate factory. 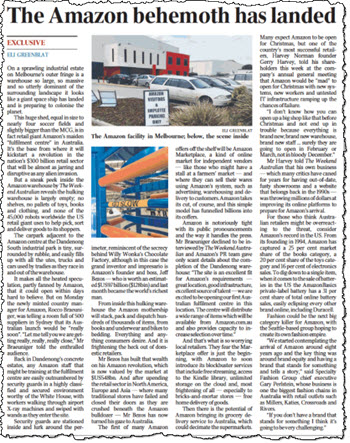 That report follows another exclusive in Fairfax’s BusinessDay section last weekend, on an “unheard of fashion attack” — multiple days of fashion photo shoots for its apparel store. 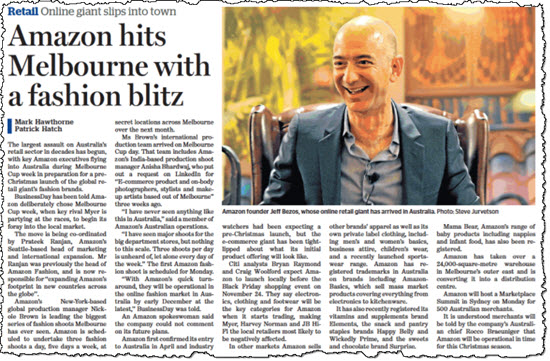 A few weeks ago, Nine News Sydney hooked a story around Gerry Harvey’s defiance in the face of Amazon, saying his stores would survive Amazon’s arrival — it was tagged “first on Nine”.

Even the Australian Financial Review cross-posted a story from Business Insider on its website last week about the products already listed for sale. Amazon has provided plenty of content for the business newspaper, with stories just in the last week about the likely impact on local retailers, the roll-out plan and has used Booktopia as an example of a successful “e-tailer”.

Since Amazon confirmed in April it would be coming to Australia, coverage has either been breathlessly reporting the wonders of what the company will be offering, or wheeling out Harvey and other retail dinosaurs on the effect Amazon will have.

Crikey will be closely monitoring coverage of Amazon once it finally does open its virtual doors — we’re sure the media will have all angles covered.

I suspect there’s a remnant of the cultural cringe at work here, a feeling that if Amazon is noticing Australia we must be special.

I don’t know why people assume the TV coverage such “launches” get is “free”. I bet Amazon is very generously greasing the palms of the print and electronic media to make sure the coverage is favourable.
Even TV news bulletins often contain “news items” that are obviously paid commercial announcements.

Maybe even Crikey. Why else this non-story?

Alternatively, to get the competition to buy space/air time?

What mugs we are! Amazon has already displayed a complete disregard for paying any local taxes, yet we greet them with all the warmth of an arriving Royal. But I guess it’s much the same peculiar behaviour, they give us nothing and we laud them to the skies, bowing the colonial knee to yet another overseas entity.

Could it be Amazon have sent them all media packs, complete with talking points and independent analysis, and it’s quicker than actually paying a journalist?