Before the Minerals Council of Australia began imploding in a war between coal fantasists and people who occasionally visit a rapidly warming planet Earth, it launched a blink-and-you’ll-miss it campaign to urgently overhaul industrial relations laws which were a terrible impediment to mining. The campaign was fronted by mining lobbyist Marn Ferguson and involved demands for individual contracts, further curbs on union power and further curtailment of bargaining issues.

The chief mining industry union, of course, is the CFMEU, the fabled ogre of conservative narratives. And based on the MCA campaign, you’d think the CFMEU was a rogue union that was inflicting massive costs on the industry via its relentless disputation and aggressive tactics. So yesterday’s Wage Price Index figures should presumably show the mining sector enduring the highest wage rises across the economy. Or surely, at least, above average wage rises? Let’s look at what the ABS says, neatly encapsulated in a diagram. 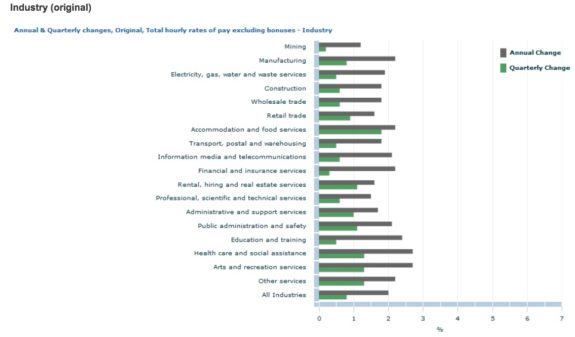 When it comes to wages growth, mining was the worst performer both in the September quarter, when Marn launched the MCA campaign, and across the twelve months to September. Whatever the CFMEU is doing to lift wages, it might need to be a bit more aggressive, not less…

Guinea, Gina and the giant gifts enjoyed by miners

Back in 2012 when Gina Rinehart mentioned Africans working for $2 per day I suspect it gave audacious ideas to the MCA.

Might Michaelia Cackles regard this as a win, a “good thing”?

Self-driving ore trucks are coming with automated mining operated from remote control centers in Singapore. That leaves mine construction and maintenance for locals – if we can fight off mine owners bringing staff on temporary work visas and if we keep large machines in Australia for overhaul.

When it comes to sleight of hand – the excuses employed to divert attention from their ultimate goal – Marn and his MCA owners make Tommy Cooper look like Mandrake.

Mining companies just throw in the big bucks to convince us that it OK to rip out the resources with little or no return to its owners. Ban all political donations and government subsidies (Adani) and their power would dissipate into smog. Wake up Australia!