Jacqui Lambie, ‘darling of democracy’, was hemmed in by her narrow views

The parliamentary love-in over Jacqui Lambie obscures her track record as a passionate advocate for Islamophobic and anti-immigrant policies, writes Kara Schlegl

In any other week, Senator Jacqui Lambie’s resignation address to Parliament would have made front page news. Her record proves her to be a divisive, sensational and important parliamentarian. Yet, due to an over-saturation of political heavyweights leaving office in light of citizenship revelations, and amidst anticipation of a resounding yes in the same sex marriage postal survey, her sentimental and impassioned speech on Tuesday was lost.

This overshadowing comes with an edge of schadenfreude considering she readily admitted to supporting the No campaign during the survey. In her farewell speech, she assured the Senate that the Jacqui Lambie Network would hold to their promise of voting on the side of their constituents. With Tasmania serving the third highest percentage of Yes votes in Australia’s states and territories, this should mean an emphatic yes from Lambie’s team.

It was evident in her final address that what Lambie cared about most in her career was serving her community directly, and in particular, the people she considers vulnerable within it. This includes welfare recipients, veterans, pensioners and the working class, all of whom she refers to lovingly as “Aussie battlers”.

“I worked hard to be a voice for those who don’t often get much of a voice in this chamber” she told Senate. “I couldn’t help everyone who needed my help, it’s my greatest disappointment in my time here.”

She has experience of a hardship that the majority of her colleagues would not comprehend, having spent much of her life as a single mother on welfare. In her words, it was a life of choosing between spending welfare payments on “either school uniforms or school lunches”. In her first question to Parliament, back in 2014, she asked fellow Tasmanian senator Eric Abetz if he agreed it was his “incompetence” that has led to record unemployment rates in their constituency. This signaled a career of successfully undermining Government welfare cuts, and consistently voting in favour of industry growth.

Lambie’s legacy as a crusader against disadvantage was further emphasised on Tuesday in Senator Patrick Dodson’s “Galiya” or “we’ll see you when we see you” speech, in which he spoke to Lambie’s heritage, and how their collective work in representing the interests of First Nations Peoples must continue.

Dodson reminded the Senate that the deficiencies in Australia’s constitution extend well beyond this citizenship mess, describing a recognition of First Nations Peoples as an imperative for healthy governance. “Today it’s a reminder that [the Indigenous] side of Jacqui’s heritage is also being denied,” he said, “as well as her rights as an Australian who fought for this country.”

There is a remarkable irony in this citizenship debacle, as it seems to have most affected those “closed borders” policy makers and anti-Islamists, who have worked tirelessly in an attempt to impede immigration rights. Lambie was among fellow dual-citizens Fiona Nash, Stephen Parry and Malcolm Roberts to vote against closing offshore detention centres in Manus and Nauru. And like Roberts, she pushed for anti-Islamic policy such as a burqa ban, and a senate inquiry into “radicalisation”.

Lambie has been described as a darling of democracy in her non-partisan voting habits. But her negative fixation on migrant communities underscores the problems in independent members holding the balance of power. Her Islamophobic rhetoric has been so impassioned, her comments on Chinese and Indonesian “invasion” so indigestible, that it has cut a fatal wound into her objectives. One cannot claim to fight against injustices for the disadvantaged while simultaneously fighting to disadvantage some of our most vulnerable communities.

Even so, at her departure, her colleagues were near unanimous in their admiration of the former senator’s “authenticity”. Labor Senator Penny Wong said she was sorry Lambie had to go, tweeting “you’ve brought spark and passion to the chamber.” Despite Lambie’s outspoken anti-Greens sentiments, Greens Party Senator Sarah Hanson-Young wrote of Lambie that “she’s always been upfront about what she believes, passionate and is a fighter for her community. That’s what we need in politicians.”

Indeed, the general consensus seems to be that Lambie’s strength as a politician was in her very singular ideology, one that is tribalistic, centred in her own life experience.

In her farewell address, she indicates plans to return to the senate after renouncing her UK citizenship. “There’s so much more I wanted to do here,” she told parliament, “and I hope to get another chance.”

But if what she wants to do is encourage hyper nationalism through anti-migrant sentiment, there remains a question of whether her appointment in parliament might be more damaging than constructive. There is hope, however, that during this time away she has the impetus to further explore experiences outside her own. 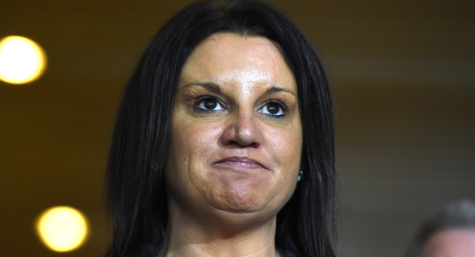 Some degree of relativity. Yes, I’d prefer a senator who agreed with me on everything, but in a situation where the contest for the relevant spot may come down to Lambie versus a One Nation candidate, I’ll take Lambie.

Nobody on the progressive side of politics was suggesting we want to see a Senate full of Lambies. But seeing as the right wing vote in Australia has to elect some Senators, much much better it be Lambie than One Nation or even most Coalition senators. I bet Lambie plays extremely well not only in some Coalition areas but in the parts of the working-class-but-socially-conservative ALP base (such as the Labor seats in Melbourne and Sydney with high no votes in the marriage equality survey), because much of her agenda really is aligned very well with serving the community and looking out for disadvantaged individuals.

Lambie (like Ricky Muir) also strikes one as being capable of learning over time, unlike the Hansonists, and who knows, 6 or 8 years in the Senate and more exposure to gay couples and Muslims than she had in her life prior to the Senate may have seen her views moderate.

You only have to look at someone like Malcolm Fraser to realise that conservatives CAN come around on this stuff if they are genuinely willing to learn.

Chinese community disadvantaged? Tosh. Any politician and that includes our blind ex foreign minister Carr who does not have some concerns over China’s attempt to undermine our society and take over our infrastructure is an idiot. The Coalition have given them sovereignty over our employment policies thanks to the Quisling, Andrew Robb, who helped sell them our ports. In other ways I agree. I do not like some of Lambie’s policies much and some of them are anathema, but at least she stands for something, whereas many stand for nothing and that included the phonies in PHON.

“But her negative fixation on migrant communities underscores the problems in independent members holding the balance of power.”
Ummm, pretty sure our country has multiple concentration camps on the go right now, one located on Manus island in PNG, and one of Nauru. You might have heard of them? Anyway, they’re center-left policy which is currently bipartisan and enthusiastically run by the major party that is in power, that being the Liberal/National coalition government, btw.

Yet, I’m meant to be scared about people like Lambie? Lambie, who arrived AFTER the camps were reopened is now the cause of remote island concentration camps?

“Lambie’s strength as a politician was in her very singular ideology…..centred in her own life experience” – I think that applies to about 100% of MPs. It is just that Lambie’s life experience is very different from that of about 99% of the rest of them, which is the reason for her popularity in her home state. Although I do not agree with her ideas about Muslim immigration I imagine this comes from her time in the army – after all the army can hardly tell their soldiers that Muslims are all great people – now get over there and kill them. I think a number of Australians feel some disquiet about the level of immigration from predominately Muslim countries, and the results of the SSM survey tells us that some migrant communities are unable or unwilling to accept the sort of diversity which they demand on issues dear to them. Yes, she was far from perfect, but was refreshingly honest and unambiguous about her agendas. I sincerely hope she will return to politics.

Mary,is it wise to mention her time in the army? because the army is not a den of progressive thinking,they are trained to do what they are told kinda like the police and how Dutton works ‘Us and Them’,and I only mention this as it seems only of late has the cream in either example has started to rise (ok,not the police)…

So which is better? A politician that says all the right things about immigration, but does nothing about migrants being underpaid or about refugees being locked up or about working class/low income and/or Centrelink benefit recipients other than use the lot of ’em as a stick or carrot on the middleclass? Or a Jacqui Lambie?

Which do you prefer? Cold, clear sighted hypocrisy? Or a correctable blindspot?

Exactly. Lambie reeks of honesty & lacks that characteristic present in most politicians’ DNA, duplicity. She was sometimes woefully under-informed (eg: Sharia law) but nobody in Parliament since Barry Jones (MHR) would be a worthy candidate for ‘Mastermind’ therefore Lambie can be forgiven instances of ignorance.

Here’s hoping she runs again, successfully. Ditto Ricky Muir who initially gave us all a hearty laugh but shaped up better than most in the Chamber by the end of his tenure