Boy George hangs up on Fran Kelly. An unlikely ABC Radio National interview this morning between breakfast presenter Fran Kelly and ’80s pop icon Boy George ended abruptly when the star hung up on Kelly. Boy George was promoting his upcoming tour with band Culture Club, and Kelly had asked a few questions about his hey-day, but when she asked if he knew about his influence on children in the ’80s as a “gender bender”, he responded with “you’re boring me, goodbye”, before hanging up. George replied to a complaint on Twitter about not hearing his answer to the question by saying he responds “to warmth”: 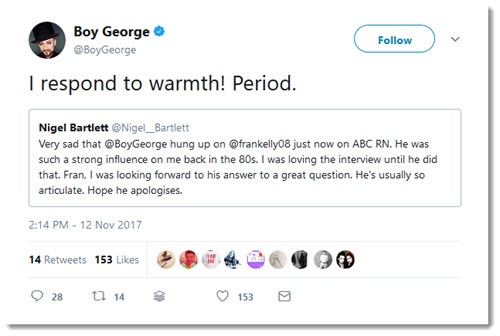 The full interview is online here.

Murdoch company withdraws ads from Fox. Believe it or not but one of News Corp’s major real estate operating arms has banned its ads from Fox News’ highest rating host, Sean Hannity. That’s right — one arm of the Murdoch empire won’t allow its ads to appear on the show hosted by the biggest name on the most important asset in the family’s two-company empire.

Realtor.com has banned its ads from the program after Hannity supported the Republican Senate candidate from Alabama Judge Roy Moore, who is facing claims he sexually harassed young girls 40 years ago. Coffee machine maker Keurig has also stopped advertising. Realtor is a property listings website like REA Group is in Australia for News.

Realtor.com replied on Friday to a tweeted clip of Hannity’s show, saying it was “adjusting our media buy to no longer include this show placement”. News Corp bought Realtor’s owner in 2014 for $US950 million and it is now owned by the News subsidiary, Move. Move is also 20% owned by REA Group, the 61% owned Australian property listings site as controlled by News Corp. — Glenn Dyer

The revolving door. The Courier-Mail‘s former editor Lachlan Heywood has jumped ship to Daily Mail Australia. Heywood announced he was leaving News Corp in September — a decision that came as a surprise to many of his staff. He hasn’t been on the bench for long — The Australian reports he’s replacing Luke McIlveen as executive editor of the Mail‘s Australian outfit. McIlveen is heading back to the News Corp fold as executive editors of Fox Sports.

Vanity Fair’s new editor. The new editor of Vanity Fair is expected to be announced in the coming days, and The New York Times‘ books department editorial director Radhika Jones is widely reported to be the replacement for long-time editor Graydon Carter. The story was first reported by Jones’ current employer, The Times.

Glenn Dyer’s TV Ratings. Dr Blake ended on the ABC and he will now join Seven on their long list of medical programs — All Saints, A Country Practice, Grey’s Anatomy and Private Practice from the US. And now there’s The Good Doctor from the US, the biggest foreign hit of the year. Blake ended on a high with 1.33 million viewers and ended up third nationally, with Doc Martin an hour earlier at 7.40pm, the most watched program across the country last night with 1.45 million viewers. By the way there have been four doctor programs featuring heavily in recent months — Doc Martin, Dr Blake, Doctor Doctor on Nine and now The Good Doctor on Seven. Who would have thunk a year ago that doctors and medicine do so well with viewers who have been so dismissive of so many old and new programs this year?

With the ABC News doing well at 7pm (1.28 million national viewers) it’s no wonder the ABC finished tops in the main channels for the first time for ages. In fact from 7pm on the ABC was on top. Seven’s The Wall had 1.08 million national viewers which seems to be its core audience — that’s not very encouraging. Nine and Ten were missing in action.

RN shake-up … on the hiss … the fucking New York Times …

When Boy George sang “Do You Really Want to Hurt Me?”, Nigel Bartlett and his mates were thinking, “Like you wouldn’t f*ckin’ believe!”