What you need to know about Fox, Disney and the future of Murdoch

What are global media watchers saying about the changing forecasts for Rupert Murdoch's media empire?

News is emerging that Rupert Murdoch is about to make drastic changes to his empire, disturbing a long held pattern of acquisition. There have been talks with Disney about buying part of the 21st Century Fox section of the empire, and although they are said to have failed, but selling still isn’t off the table. Will the 86-year-old mogul be able to hold on to his influence even as the sands of business shift? Here’s what some of the global experts are saying:

A tactical u-turn that is totally out of character. “It used to be said that Rupert Murdoch’s media empire would not survive intact beyond the founder’s lifetime. Now, it seems, it may not get that far … This turn of events is extraordinary. We had assumed Murdoch’s attempt to seize 100% of Sky was a prelude to one last, and bigger, deal — a final expansionary adventure before control was fully passed to sons Lachlan and James. Selling is also entirely out of character: Murdoch rarely does tactical retreats.”

— Nils Pratley in The Guardian

Murdoch faces reality in a Netflix world.“It shows the power of changes sweeping film and television entertainment as Netflix and Amazon makes programs that are streamed to subscribers rather than having to be broadcast by cable and satellite operators. That is placing pressure on Disney and other more traditional companies to respond. The Murdochs have never been too sentimental about business — aside from Rupert Murdoch’s historic attachment to newspapers — so they may simply be responding to the fall in the Fox share price … But it upsets the delicate balance that Rupert Murdoch seemed finally to have gained by splitting Fox from News and placing James and Lachlan in the management of the two companies as his heirs apparent. The structure worked suitably for two sons; demolishing it would not.”

The kids could be happy with a smaller company.“The fact that the Murdoch family empire, or at least parts of it, are for sale is a big change. Rupert Murdoch has usually been a buyer — remember three years ago when he wanted to swallow Time Warner? But at some point he is going to hand over the company to his sons Lachlan and James, and they’re signaling that they’re okay if he hands over a much smaller company — or no company at all. (Note: In either version of this scenario, the Murdochs would still own News Corp, the publishing (plus other stuff) business that includes the Wall Street Journal and the New York Post. Maybe that’s because Rupert Murdoch made his first fortune in print, or maybe it’s because they haven’t found a buyer for that one.)”

Four other factors in the Murdoch retreat.“Yes, of course there is a need for scale in the media business. But as news broke that 21st Century Fox had held talks with Disney to sell most of the $50 billion company, here are some of the other, more immediate elements behind the prospective dismantling of the Murdoch media empire:

• The likelihood that UK regulators will block 21st Century Fox’s acquisition of 100 per cent of Sky television.

• The ongoing struggle for dominance between Lachlan Murdoch and his brother, James. 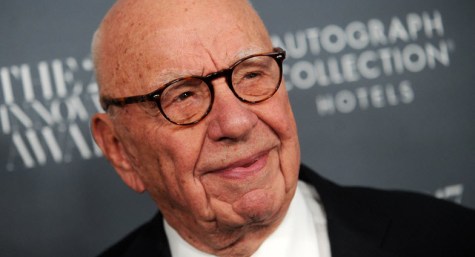 the sooner rupert dies the cleaner the world will be, old nick has the red carpet out and a job waiting, trouble is the miserable old bastard is so dried up and preserved he`ll be dead 6 months before any one notices, there wont be one tear shed for this evil old Tory, even amongst the Tory class, he`s even worse than them, and that`s hard to be, its going to be pretty crowded down then when Howard, Joyce, Abbott, Jones and Hadley and the rest of the current redneck mob arrive.

How must he feel knowing that myriads are longing for his demise?