In new revelations about Hollywood producer Harvey Weinstein, The New Yorker has reported on spies he used to contain allegations, including journalists.

Harvey Weinstein’s army of spies. In the latest explosive Harvey Weinstein revelations, The New Yorker has reported that the powerful film producer employed a network of spies and informants in an attempt to control any accusations against him.

Two private investigators from Black Cube, using false identities, met with the actress Rose McGowan, who eventually publicly accused Weinstein of rape, to extract information from her. One of the investigators pretended to be a women’s-rights advocate and secretly recorded at least four meetings with McGowan. The same operative, using a different false identity and implying that she had an allegation against Weinstein, met twice with a journalist to find out which women were talking to the press. In other cases, journalists directed by Weinstein or the private investigators interviewed women and reported back the details.

The report named former Channel Seven reporter Dylan Howard, who is now the chief content officer at the National Inquirer‘s publisher, as passing information along to Weinstein gathered by his reporters “as part of an effort to help Weinstein disprove McGowan’s allegation of rape”. Howard was sacked by Seven in 2008 over a chequebook journalism scandal relating to AFL drug testing, before launching an entertainment reporting career in Hollywood.

Disney backs down on LA Times ban. Disney has sued for peace and ended its ill-advised ban on film critics from the LA Times. The entertainment giant imposed a ban after the LA Times reported on the way Anaheim County (where DisneyWorld is based) had given the company tax breaks and other help. But the ban on LA Times film critics from advance screenings is now off — Disney announced the change in a statement after a furious backlash from other news outlets (including The New York Times) and four critics’ associations, all joining in a boycott of film reviews and stories about Disney’s films.

It wasn’t a good look for Disney. News of the ban broke a couple of days before the story that the company had been talking to 21st Century Fox about buying some of its film production, distribution and cable businesses. The ban on the LA Times would have made it much harder for Disney to get the greenlight for any Fox deal from regulators (especially in California). — Glenn Dyer

How fish food fake news spread. In among the coverage of US President Donald Trump’s current tour of Asia, a particularly silly story spread about him emptying a full box of fish food into a koi pond alongside Japanese Prime Minister Shinzo Abe. Reports, mostly on social media, but also by major news outlets, suggested Abe had only sprinkled the food in. But full cuts of a video show both leaders feeding the fish in exactly the same way. The Hill‘s media reporter Joe Concha called the reporting intentional and deceptive:

“So with this latest gaffe from numerous outlets in today’s effort to make the president look like a dolt, it’s another black eye for an industry that resembles Apollo Creed’s face during his fatal fight against Ivan Drago in Rocky IV.”

Vice’s new regional HQ. Vice has announced it’s expanding in the Asia Pacific region, with its global general manager moving to Singapore as the new regional headquarters, and opening new bureaux in Mumbai and Delhi. Vice India is launching next year, and the youth-focused news outlet already has offices in Sydney, Melbourne, Auckland and around the APAC region. 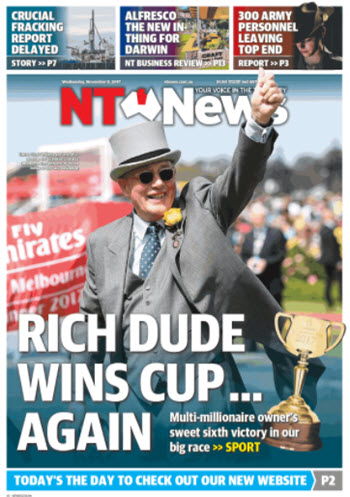 Glenn Dyer’s TV Ratings. The race did the job yesterday afternoon for Seven. The race averaged 2.49 million nationally, but like the AFL and NRL Grand Finals, these figures are indicative — the real audience will be a lot, lot bigger, probably by two million or more, because of the difficulty measuring all the people watching in pubs, clubs, workplaces and at parties large and small.

But the real message from yesterday and last night was confirmation that Seven has the biggest foreign hit of the year on its hands with The Good Doctor’s second Tuesday night outing — 1.78 million national viewers, up from 1.64 million a week earlier.  Seven said the first episode a week ago not only had 1.64 million overnight viewers, but another 363,000 time shifted viewers over the next seven days and 63,000 streams for a total audience of 2.06 million, which makes it a mega hit, especially in these days of reducing viewing levels. Seven’s Instant Hotel debuted to 1.12 million nationally and some nice demos. Will its audience return for episode 2? That is the big question.

Nice to see The Cup go to a battler – with the wherewithal to buy foreign developed (from breeding to the track) horses (often of largely unknown capablility under our conditions), to bring here and take up a large proportion of the field (25%) – for us to wager our money, on a pig in a poke – while limiting locals from taking part.

Good headline from NT News, but I prefer the similar one from when Turnbull became PM -at least it got second billing to a more important issue:
https://twitter.com/workmanalice/status/643514505616601088