What you need to know about Manus Island

Greens Senator Nick McKim, the only Australian politician on Manus to watch the detention centre close, calls it an "escalating humanitarian emergency".

Today, the Manus Island detention centre, which houses about 600 men intercepted attempting to enter Australia, officially closes. The water, food, and electricity are being cut off. Medication for the 88% of detainees found suffering from depression, anxiety or post traumatic stress disorder is no longer being handed out. There have been problems with the sewage for days. The staff are gone. Fearing violence from locals or the military, hundreds of men are refusing to leave, launching legal action, collecting rainwater and barricading themselves inside. The detention centre is to be converted to a Papua New Guinea military base — a notification from the PNG immigration and citizenship authority tells anyone choosing to stay will be liable for removal. 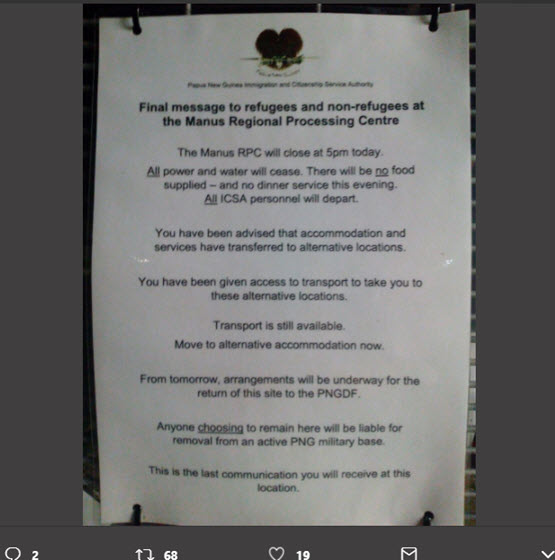 “The last of the Australian security and support staff left this morning,” Greens Senator Nick McKim told Crikey. “There are currently no Australian or PNG officials here. It’s an escalating humanitarian crisis, unfolding before our eyes.”

McKim is the only Australian politician on Manus this morning — along with representatives from Amnesty International and The United Nations High Commissioner for Refugees.

Manus Island has hosted the deaths of several detainees, attacks by the military and locals, and cost taxpayers billions of dollars. How did we get here, and what next?

The offshore process centres on Manus and Nauru where established in October 2001 by the Howard government. In the aftermath of the Tampa affair and the September 11 attacks, Howard’s declaration “We decide who comes into this country and the circumstances in which they come”, resonated with the public.

It wound down in 2003, empty by September, being maintained “just in case”, before being dismantled entirely by the Rudd government in 2008. Or so it seemed. The political toll of continued arrivals during the Rudd-Gillard years became too much, and Manus was re-opened in November 2012. After Gillard was ousted and Rudd returned, he signed an agreement with Papua New Guinea (whatever he says about it now) solidifying the arrangement — “As of today asylum seekers who come here by boat without a visa will never be settled in Australia,” he said in July 2013, searching, perhaps, for a Howard–like soundbyte of his own.

In April 2016, PNG’s supreme court ruled that the Manus Island detention centre to be illegal. It was found to violate the right to personal liberty in the countries constitution and ordered “both the Australian and Papua New Guinea governments shall forthwith take all steps necessary to cease and prevent the continued unconstitutional and illegal detention of the asylum seekers or transferees at the relocation centre on Manus Island and the continued breach of the asylum seekers or transferees constitutional and human rights”.

Subsequently, a class action was launched against the Australian government for illegal detention experienced between 2012 and 2016. In September the government offered them a settlement of $70 million.

Meanwhile, in November last year it was announced that a deal had been reached with the Obama administration in the United States to resettle Manus (and Nauru) detainees — leading to the now infamous phone call between Malcolm Turnbull and new US president Donald Trump. The deal survived Trump’s rancor the first 25 detainees left for the US in September.

Immigration minister Peter Dutton has been notably quiet on Manus of late, but his preferred paper, The Daily Telegraph, ran an article on Tuesday stating “authorities and staff are increasingly concerned about an outbreak of violence today, with The Daily Telegraph learning that transferees have said they ‘will use anything’ including rocks, tables and chairs if relocation is attempted,” and obtained the first photographs of “clean, newly renovated living facilities”.

No comment has been made regarding potential violence from Manus residents towards the detainees once they are forced out of the prison.

“The whole situation is wracked with uncertainty,” Greens Senator Nick McKim told Crikey on Tuesday. “Amnesty International and the UNHCR are here, but obviously are unable to provide the detainees with the food and water they need.”

Those who have been found to be legitimate refugees (roughly 90% of the 600 men according to court documents) have been offered the option of moving to alternative facilities on Manus. Of the earmarked sites, McKim said, one is a prison and another still being built and some reports say the sites have sparked protests among local people.

It’s even less clear what is planned for those who have not been granted refugees status, beyond being urged to return to their countries of origin.

Everyone rejoice, Manus Island is ‘open and free’!

Immigration Minister Dutton has an individual responsibility of “Duty of Care” for every detainee held on Manus. For him to wake up one morning; declare he no longer has any interest in or for those under his authority (every single man, woman, or child previously detained and incarcerated over years right through to the current 600 men left) and simply deny their existence beggars belief.

Has the Australian Parliament no view, procedural legality, accountability for the Ministerial action / inaction that directly places all 600 men at immediate risk of their lives? Abandoned in a foreign land without rights, legal protections, means or sustenance; facing extreme hostility and open threat of violence. Through no fault of their own circumstance. Each and every one these men are abandoned. The host country has no place or responsibility for them. And the Minister who is totally responsible has determined to discard them as no longer needed to shore up his domestic political priorities. Every Australian is responsible for each detainee’s immediate safety and individual futures; for we deprived them of a future when they were forcibly incarcerated without charge, term or legal process.

Why is the Australian Parliament silent . . . and will the Hon. Members remain silent?

This is, or should be – were we living in a just, sane society, a governance crisis.
Manus only exists because of government action – not just enabled by unethical & immoral bipartisanship – which has since been ruled illegal by the PNG judiciary.
Ergo, those placed there by Australian government fiat are, ipso facto & de jure, the responsibility of the aforesaid government.
Your call, Talcum.
I can’t heaarrrr you!

Manus is a stark reminder of the dishonesty and hypocrisy of our politicians.
When they call boat-people “illegal” they are lying: boat-people commit no offence by arriving in Australia, uninvited, seeking a safe place to live.
When they say they are worried about people drowning in their attempt to reach safety they show their hypocrisy. If they are worried about people drowning, why do they punish the ones who don’t drown?

Political pawns (“Our harshness on refugees is harsher than yours!”?) and supposed “examples” against people smuggling – like hanging dead crows on a fence to deter others?
“Stop the drownings” was an eventual acceptable aegis, settled on to hide their real ideology – after “children overboard” (the vilification of refugee intentions), “potential terrorists”, and just plain xenophobia-cum-supremacy?