Prediction v hindsight: how do businesses’ past claims about the Fair Work Act stack up?

Conservatives and business leaders assured us that WorkChoices would increase productivity and Labor's Fair Work Act reduce it. So what happened? The Productivity Commission has the answer.

“[WorkChoices will] bring forth the next wave of productivity improvement which will benefit all Australians.”

“I think there’s a lack of appreciation of the terrific improvement in productivity that occurred when the system was deregulated and similarly, of the damage that would be done if you turn it back.”

“We have an act [Fair Work Act] that’s actually, according to our members, impeding productivity and certainly not contributing to an improvement in it.”

“Despite the objects of the [Fair Work] act stipulating that bargaining should deliver increases in productivity, my research suggests that unions are resisting management attempts to achieve efficiency-related tradeoffs or productivity improvements.” 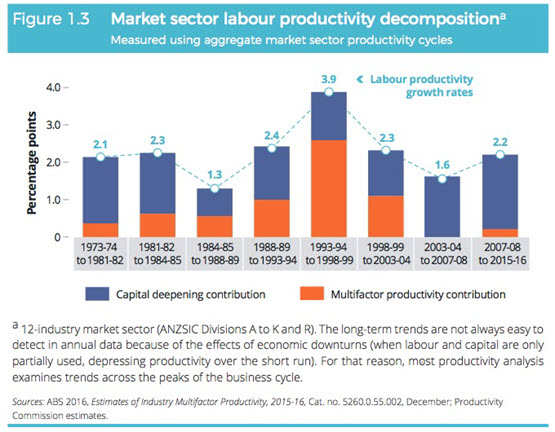 When it comes to WorkChoices, Abbott can’t take a trick

Workplace flexibility: where (almost) everyone gets to grandstand

Bernard, a very poor story as I can’t see what you are getting at. The Figure used is more confusing than enlightening. I presume what you are trying to say is that all the vested Business Interests and Howard were spinning crap and that WorkChoices and Fair Work Act only screwed workers out of any share in the productivity gains that they in fact delivered.

Its pretty simple, productivity growth has been higher under the Fair Work regime than Workchoices.