Looking past the shiny and obvious, this week's Senate estimates hearings were full of newsworthy comments.

Senate estimates week leaves journos and senators foraging like miners, looking for a nugget of a story by grilling senior public servants and ministers from early in the morning until the wee hours, day after day. This week provided them with a huge win after the Australian Federal Police raided the offices of the Australian Workers Union the day before the Registered Organisations Commission and Employment Minister Michaelia Cash were due to appear before the Senate committee. But while most eyes were trained elsewhere, there were more than a few admissions and statistics that were uncovered, with the possibility of more troubling headlines for the government in coming weeks.

On Thursday it was revealed that the “open letter” sent to governments around the world by North Korea only came to the attention of the Department of Foreign Affairs and Trade in media reports of its existence. The letter, which Foreign Affairs Minister Julie Bishop passed on to media outlets last week, warned Australia to distance itself from the US, and was received by the minister on October 3 — two weeks before it was made public. DFAT assistant secretary Graham Fletcher said it was probably an “oversight” that the letter hadn’t been shared with the department.

“As soon as we found out the letter existed we took steps to find out where it came from and how, and we spoke both to our embassy in Jakarta and also the Foreign Minister’s office,” he said.

Department of Immigration secretary Mike Pezzullo appeared before estimates for probably the last time in his current role before taking on the new gig of secretary of Home Affairs. He used the chance to defend the new department and then also joked about torture. Under questioning from the Greens’ Nick McKim, who said “Spare us the fake sympathy. You have been torturing them for four and half years,” when speaking of asylum seekers on Manus Island and Nauru. Pezzullo replied:

“I reject any assertion that this department has been torturing anyone. The only torture I am aware of is sometimes when we have to appear here.”

It didn’t go down well with the senators present. 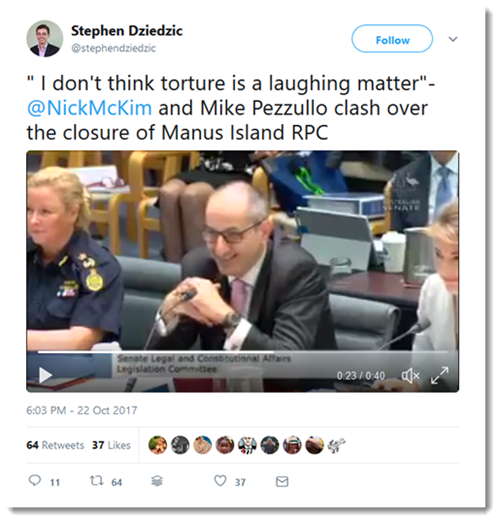 Attorney General George Brandis defended the appointments of former Liberal MPs and staffers to the Administrative Appeals Tribunal (AAT), saying that being a member of parliament wasn’t a “disqualification” for such appointments. It was also revealed that Andrew Nikolic — one of the 11 Liberal MPs to lose his seat at the last election (out of 15) and end up getting a government gig — is still running his Liberal MP Facebook page with political content on marriage equality. Brandis also said that he had personally recommended some of the former Liberals now on the AAT.

The true state of Centrelink’s robo-debt issues was also revealed, with 114,000 letters sent in July and August this year to welfare recipients. The letters, which raise possible debts that recipients need to confirm with the agency, make up a significant increase in the number of letters sent out. It was also revealed that of the 202,000 cases where the department has already confirmed the debt amount owed, 49,000 people to receive letters since July last year were found not to owe anything. The department has sent 403,000 letters since July 2016, but less than half of the cases have been finalised.

Estimates also heard that more than 55 million calls made to Centrelink in the last financial year received a busy signal, but Department of Human Services secretary Renee Leon defended the number, saying apps that automatically re-dial numbers have inflated the figure.

Security manual missing for a year

On Monday it was revealed that a 1000-page security manual covering details of security at Parliament House had been lost for a year. The manual was lost by a contractor at BAE Systems, but details are scarce on what is in the manual, or where it could be. BAE Systems wasn’t revealed on Monday, but on Tuesday, when the defence giant said it was confident there would be no compromise of security at parliament.

The head of the Australian Wool Innovation body told estimates he had broken his own organisation’s code of practice over an incident where he told a journalist to “fuck off”.”I apologise to wool growers and anyone else who was offended by the language,” Wal Merriman told the committee, when he was asked about the comments.

“The language I used was more fitting for a shearing shed … I’m from the bush and I need a lot more polish to operate in these surroundings.”

“I am from the bush. I’m far more comfortable with wool growers out in the paddock than I am here at Senate estimates.”

‘I’m asking you to stop doing that’: Home Affairs told off for speaking on behalf of ASIO, AFP

I remember Wal from school. Always thought he was a bit lacking in perception.

The wise(?)crack from Mike Pezzullo typifies the heartless bureaucratic attitude to refugees trapped on Nauru & Manus Island. I watched the live telecast in disbelief at the lack of empathy from the Immigration secretary & his limp effort to put down the Senate Estimates process. What a bore, how taxing & gruelling it must be for top-ranking overpaid civil servants to occasionally appear in public & be held accountable.

With jerks like Pezzullo in administration what hope for the asylum wretches?

There’s an awful lot of Monty Burns about Pezzullo – “awful” being the operative word.

Definite not in the same order of importance as the items above, but the committee’s grilling of CASA on Friday about its investigation of James Ashby for flying a drone near Parliament House was interesting.