Twiggy played for time. Andrew Forrest is rarely shy of a media appearance. Between his threat to start a “rebel Rugby League” over the Axing of the Western Force, “assaulting” big tobacco, using riot footage to push cashless welfare cards, and donating hundreds of millions to charities, you would be forgiven for forming the impression he liked any media attention that came his way.

Apparently not — federal court listings show he’s lawyering up and taking on Reuters.  As it’s very early in the process, not much is publicly available about the case, so we don’t know for sure what story attracted the suit, but Reuters Deputy Bureau Chief, Australia and New Zealand Jonathan Barrett is the second respondent. A Reuters story from May 17 this year, apparently written by Barrett, called “Australian billionaire uses indigenous land laws to keep prospectors off farm” has been withdrawn from the Reuters website, and, seemingly, Barrett’s Linkedin. 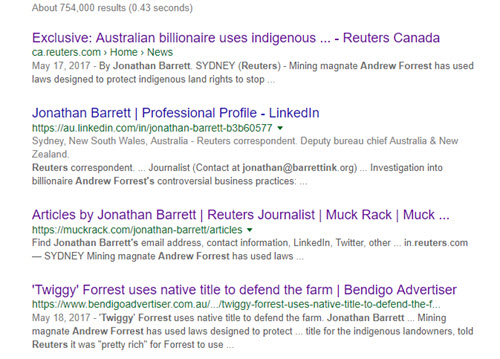 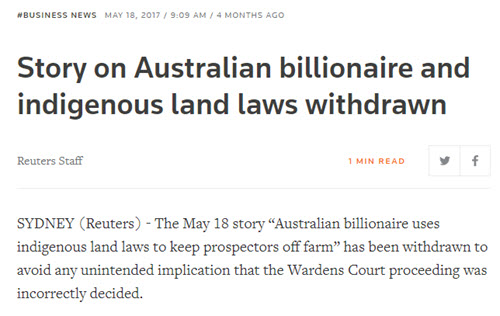 Stop the press, ABS with a big scoop. Tucked away in yesterday’s Australian Bureau of Statistics CPI report was a long technical article on inflation by a Reserve Bank economist on secondment to the ABS. It’s one for the wonks, except that the article pointed out that:

“The recent period of low inflation is associated with lower variation in price changes across goods (in absolute terms, prices are changing by less, whether they are increasing or decreasing). Low inflation in non-tradable goods and services may be a cause and a symptom of low wage pressures.”

Which is fair enough. Then it goes on to note:

“Prices of tradable goods and services seem to be more sensitive to exchange rate fluctuations during periods of currency depreciations compared with periods of appreciations.”

Tale as old as time. It’s been quite a few years since journos at Fairfax metro dailies started referring to themselves as “Fairfax Media” in all reports. For example, “Fairfax Media can reveal …” or “Mr Smith told Fairfax Media”. It was seen as a sign of the increasing merging of the newsrooms of The Age and the Sydney Morning Herald when they became part of the “Fairfax” behemoth in copy. Now it’s back to the future with journos in Melbourne told they can refer to themselves as “The Age” again. What’s old is new again.

Immigration visa mix up. A caller to the 3AW newsroom says 40 new personnel were sent to an immigration detention centre outside Australia by an outsourced security company on Tuesday. The only problem was that the staff were turned away when it was realised they didn’t have the right visas for the job. They were meant to start at the end of the month but will have a delay until their visas are issued. Know more? Drop us a line.