Today in Media Files, ABC managing director Michelle Guthrie has revealed some details of ABC presenter salaries at Senate estimates, and the family of a murdered Maltese journalist has been left to face a defamation case against her.

ABC salary details revealed. ABC managing director Michelle Guthrie has told Senate estimates that revealing individual presenters’ salaries would breach the Privacy Act, repeating the broadcaster’s long-held position on political calls to have the numbers published. Guthrie said the highest-paid talent was a woman, and earned about an eighth of the top BBC presenter’s salary — about $460,000. She said there were about 150 people at the ABC who earn more than $200,000 a year. Communications Minister Mitch Fifield told the ABC earlier this month it must reveal the names and salaries of its top presenters, or the government would introduce legislation requiring it.

Murdered journalist’s family faces libel case. The family of a Maltese journalist killed in a car bomb is now facing a defamation suit. Daphne Caruana Galizia, a journalist who led the Panama Papers reporting in her county, was killed last week in a case that is yet to be solved. Before her death, the popular blogger had been sued for defamation over a story she wrote alleging that Malta’s economy minister had visited a brothel in Germany while there on business. Under Maltese law, defamation lawsuits are passed on to a defendant’s heirs if they die before the case is settled. Caruana Galizia’s husband and three sons attended court on her behalf — they are facing an 11,000-euro fine if the case goes against them.

Brands drop photographer over harassment claims. Fashion brands have dropped successful photographer Terry Richardson amid allegations of sexual harassment. Richardson has photographed Barack Obama and Oprah Winfrey. He has run high-profile fashion shoots and directed Miley Cyrus’s Wrecking Ball video clip. He is also known for his highly sexualised shoots. The Guardian reports that stories of Richardson’s inappropriate behaviour had circulated for years, but the recent stories surfacing about sexual harassment in the film industry had scared fashion brands into action. Valentino and Bulgari have said they will stop commissioning him, and Vogue‘s publisher Conde Nast has also said it will stop working with him.

Facebook trials removing news stories from feeds. Facebook is trialling clearing newsfeeds of everything but sponsored posts and content from friends in some countries, in a move that one journalist says has led to a 75% drop in interactions on news websites in Slovakia. The social media giant has introduced a feature it’s calling “Explore”, which will show users news stories they are interested in. It’s being trialled in Sri Lanka, Bolivia, Slovakia, Serbia, Guatemala, and Cambodia, but Facebook says it doesn’t yet have plans to roll it out anywhere else. Press Gazette reports the experiment leaves publishers with no choice but to pay for sponsored posts to appear in newsfeeds. 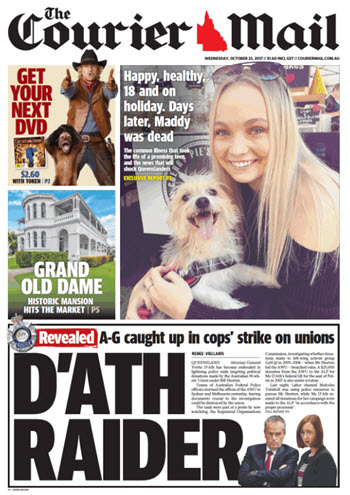 Glenn Dyer’s TV Ratings. OK, only one show in town this week and it isn’t The Block or anything to do with the NBN. It’s the dramtic episode of The Bachette tonight, and D Day tomorrow night from the final two fellas. So after a miserable first three nights of the week, it will be gold so far as the ratings are concerned for Ten. Ten premieres Sisters after The Bachette at 8.40pm — seems to be worth a look. Let’s hope it’s not The Wrong Girl redux.

The Block did it for Nine last night with help from the ageing The Big Bang Theory. The Block had 1.72 million national viewers and Big Bang 1.160 million and that was the night. If it hadn’t been for The Block it would have been quiet a boring night.

Let’s ope the recent kerfuffle about salaries paid to commercial presenters will put the ABC’s salaries in perspective.

Sarah Ferguson let that little spoiler out weeks ago (not the actual salaries though).