While the Institute of Public Affairs likes government kept small, it's happy to use its research services where it can take them.

The Institute of Public Affairs famously likes its government as it likes its coffee — small, white and bitter. But not so much that it’s not prepared to use government as a research arm.

In documents unearthed via freedom of information laws and discussed at Monday’s Finance and Public Administration Senate estimates hearings, Australian Public Service Commission (APSC) head and industrial relations hardliner John Lloyd used his work email account to chat with his erstwhile colleagues at the Institute of Public Affairs in 2015. He exchanges what passes for cheeky badinage among the libertarian set, asking an unnamed IPA interlocutor if he’s upset about losing his mantle of “IPA pin up boy” to Lloyd (we can only assume he’s emailing the passably handsome Simon Breheny, not now-Senator James Paterson).

Just “relieving the tension”, Lloyd said about the remark to Labor Senator Kimberley Kitching, who spent about 20 minutes yesterday afternoon botching the task of subjecting Lloyd to any pressure over the emails.

Because, more seriously, Lloyd may have used the resources of the APSC to do some research for the IPA. On April 13, 2015, Lloyd sent an unidentified IPA friend a document “Examples of generous arrangements in Cth enterprise agreements”, “as discussed”, he wrote. “I am free to discuss this at any time,” Lloyd wrote. Who initiated this piece of research — Lloyd himself, or the IPA — isn’t clear. But the latter was most pleased. “Thank you for this,” Lloyd’s IPA correspondent replies. “That is very handy.”

Sure was. The research material sent by Lloyd was used by the IPA’s James Paterson, now a Senator and, would you believe it, chairing the hearing, and one Aaron Lane, in putting together “Driving a Soft Bargain”, an attack on public service workplace agreement conditions. Some sentences are copied near-verbatim from the APSC material. In particular, the IPA uses Lloyd’s table calculating the difference between private sector and public sector superannuation arrangements — although, perhaps in a sign that even the IPA thought Lloyd was overstating things, changed his calculation from 20 years to 10 years. 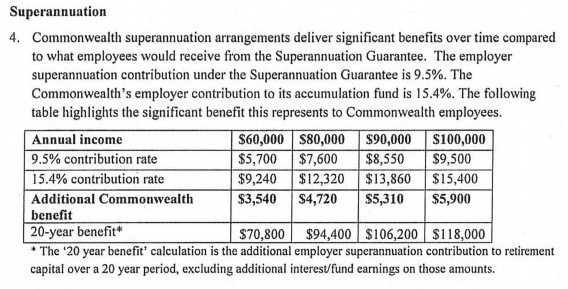 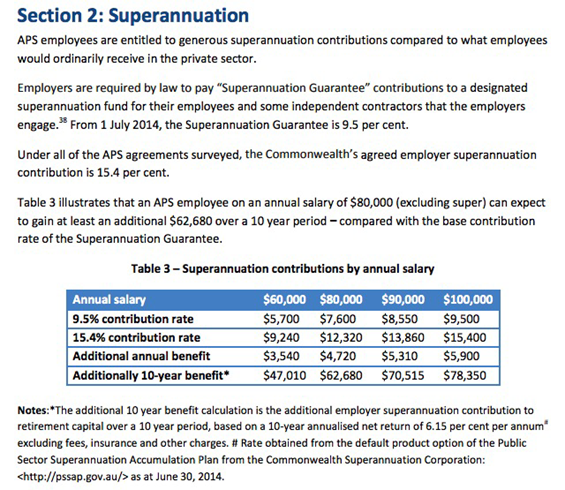 Lloyd’s document was also used by the IPA as the basis for its submission to a Senate committee inquiry into Commonwealth public sector bargaining, which attached “Driving A Soft Bargain”.

Regrettably, Lane and Paterson don’t appear to have acknowledged Lloyd’s “very handy” contribution to their document — although perhaps it’s understandable that Lloyd wouldn’t necessarily want public acknowledgement of his contribution to attacking the employment conditions that he, as head of the APSC, presides over. Nor do taxpayers get a thank-you from the authors.

While Kitching bumbled her way through an “attack” on Lloyd over this yesterday, Senator Penny Wong happened to notice that she was mentioned in dispatches as well. In February 2015, Lloyd whined to one of his IPA friends about Wong having a “swipe” at the IPA at a doorstop. “What’s the problem with my comments Mr Lloyd, do you want to put them on the record?” Wong asked a now obviously embarrassed Lloyd. “Why didn’t you have the guts to raise it with me?”

At that stage, Paterson, handily chairing the committee, tried to intervene. “Don’t you all stick together like a little club. I know that you’re in the club, but he’s a statutory officer,” said Wong, talking over Paterson.

A club that taxpayers, it seems, occasionally help out.

The only public servant the IPA ever liked packs his bags

“The Institute of Public Affairs famously likes its government as it likes its coffee — small, white and bitter.” – That’s perfect!

This is outrageous…I’d like to see what would happen to a Labor MP who leaked info to a union.
NOT GOOD ENOUGH!!

This isn’t acceptable for a public servant to provide information to a lobbyist unless cleared by public service PMC. Seems both sides are assisting their respective think tanks or lobbying wing. RW Conservatives for IPA, LW socialists (alleged Bill Shorten gave lots of union funds) for GetUp.

Bernard why don’t you do a comparison for “independent” political organisations like GetUp, Grattan Institute & IPA for their funding and if AEC agrees they are independent?

Getup are funded by individuals.

Seems that GetUp’s funding came from individuals via their unions.

Well, this article addresses the IPA’s independence and I can’t comment on the Grattan Institute, but it seems the AEC have investigated Get Up’s independence twice – first in 2005 and again in 2010- and both times found Get Up to be independent. It seems Crikey took note of your comment, Ken, because here’s the article:

I’m not sure what the issue is. Looking at that compass, it is quite possible for a libertarian to be right wing, left wing or in the centre. “Right Wing Libertarian” describes the IPA quite well really.

True, Left wing libertarians would be Green, rw would be Leyonjholm. (and the IPA I guess)
The sigh is that being Libertarian is more being anti-Authoritarian. Something we all ought to be, no?

I look forward to the AFP going mob handed into the IPA to ascertain its very lavish funding as today they raided the AWU over a donation to GetUp.
Oh look, Porcus Avitrix.