NT News political reporter Chris Walsh has left the paper in a shock to many in the Top End.

Today in Media Files, NT News political reporter Chris Walsh has made a shock exit from the paper raising  eyebrows in the Top End, and the Walkley Foundation has announced its finalists for its prestigious journalism awards.

NT News journo gone. The word overnight of the sudden departure of Chris Walsh from his gig as senior political reporter at the NT News, came as shock for many up here, particularly those of us who value fearless journalism. Walsh—without doubt the finest investigative journalist the NT has seen for many a long year—if not ever—moved to the NT in mid-2014 and hit the ground running hard and fast.

The Country Liberal Party government under Adam Giles was a daily train wreck, leaked like a sieve and gave Walsh and his fellow NT News journos buckets of grist for the daily news mill that saw the publication a year ago of Crocs in the Cabinet, a glorious and bloody chronicle of government as flailing chaos co-written with NT News deputy editor Ben Smee.

Walkley finalists announced. Finalists for Australia’s most prestigious journalism awards were announced last night at simultaneous events in Sydney, Melbourne and Brisbane. For all the controversy about the new inclusion of tweets in the “headline, caption or hook” category, no tweets were named as finalists (although The Australian‘s sketch writer James Jeffrey is a finalist for his website 404 messages). 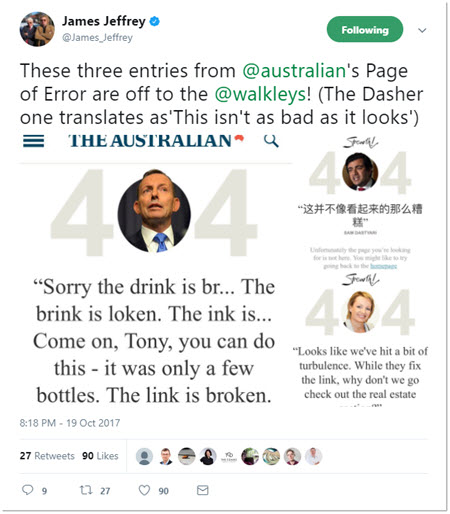 The ABC’s Rachael Brown and Louise Milligan, and Fairfax’s Michael Bachelard, are in a three-way tie for being named a finalist in the most categories — they have all made the grade in three categories each. The full list of finalists is here. Winners will be announced at a ceremony in Brisbane next month.

Seeing double. All newspapers have their regular letter-writers published in the letters to the editor pages. But, as a Crikey tipster pointed out, could The Age have missed that it published two letters from the same bloke for today’s pages? There are two letters signed with the excellent name of Andrew Watkins, and the suburbs given are Melbourne’s Highett and Hampton — right next to each other.

Has sharemarket bounce helped a struggling media? Which of our media stocks has managed to catch the current sharemarket bounce on the ASX which started on October 5? By the close on Thursday, the ASX 200 was up more than 4.2%, or close to $100 billion in value across the entire market. Miners, banks, some techs and some mid caps have led the rise — but what about media, in view of the changes to ownership and other laws?

But Seven West Media is stuck in neutral and going nowhere as investors wonder about the sustainability of its $795 million of debt and the thin margin between it and the market value of $965 million.

Nine does have about $290 million in debt, but that is easily covered by its market value and we won’t know a solid debt figure for Fairfax until the separation with Domain happens and the accounts are finally recast to allow for the impact of that deal. But preliminary figures show Fairfax will have a lot of room between its market value and its debt.

The heavily indebted Seven West Media has seen no growth whatsoever — in fact the shares have flat-lined — from 64.5 cents on October 5 to 64 cents on Thursday. In other words, Kerry Stokes’ TV and print business is unwanted by investors looking for growth and not even the greenlight for the media law changes this week have had an impact. — Glenn Dyer

Glenn Dyer’s TV Ratings. Our brokest network enjoyed the spoils of Sophie Monk and The Bachelorette, winning in the metros overall and the main channels. And wasn’t it a dramatic end — Blake marched off, roseless and spewing, Stu still there, but now firing blanks. Is Jarrod the front runner for the finale next week, or is Apollo a dark horse ? The Bachette was second nationally with 1.35 million viewers and tops in the metros with 1.01 million. GoggleBox (1.07 million nationally) was funny last night with good takes on all programs, especially the cliches now roaming at large on SBS’s Food Safari — Earth.

Time for Australian companies to come clean on JobKeeper subsidies

Newspaper dump watch no.654
This morning at Tullamarine to drop my partner off to catch a flight to Canberra for a medical conference I noted with interest the complete lack of ‘Australian / News Corp(se)’ newspaper stands at the departure gates… once a feature at many airports.
Has News given up trying to increase their declining readership by making ‘available’ free copies of the Oz or Herald Scum, or has Melbourne Airport finally had enough of the waste.