Spicer investigates Australian ‘long-term offenders’. Broadcaster Tracey Spicer says she is investigating sexual harassment in the Australian media industry, including two long-term offenders. She’s asked her Twitter followers to privately share their stories with her, and told The Australian the men she was looking at were “serial predators”, and she would be looking at prosecutions as well as exposing them: “They deserve to be held to account after the way that they have behaved over many decades.” 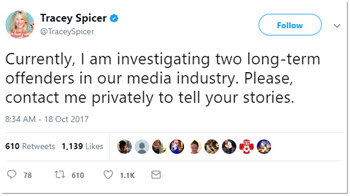 Spicer has also named late former Nine executive John Sorell as one of the previously anonymous man whose alleged harassment was detailed in her book, and who journalist Alison Mau wrote about.

‘The fear that permeates news outlets’. The head of Amazon Studio Roy Price has quit after allegations of sexual harassment were published about him by The Hollywood Reporter. He’s the second major Hollywood executive to be brought down by such revelations in just days, with Harvey Weinstein disgraced after The New York Times revealed a series of allegations of harassment against him. Allegations about Price were reported by Kim Masters in August (before she wrote the explosive THR follow-up), and she’s written about the trouble she had getting that first story published, saying there is a “fear that permeates news outlets at a challenging time for journalism”:

“By the time I was done, I had talks with more than six publications and went through legal review at three. The anxiety is always high when there’s a threat of a lawsuit around a story, but this time, it seemed off the charts. At one point, an attorney reviewing the piece only sputtered when I asked her to explain what, exactly, was legally problematic with portions of the story that she wanted to delete. She literally could not construct a sentence to explain her reasoning.”

Defamation documents filed against Mark Latham. Junkee’s news and political editor is suing Mark Latham for defamation over comments he made on his online commentary program. Osman Faruqi sent Latham and his Canadian publisher Rebel House a concerns letter in August, and filed documents seeking damages and costs for defamation in the Federal Court this week, The Sydney Morning Herald reports. In Latham’s program — called Mark Latham’s Outsiders — on August 2, he referred to tweets by Faruqi about the citizenship troubles that had prompted Senators Scott Ludlam and Larissa Waters to leave parliament. Latham said in the program that Faruqi was promoting anti-white racism, and that those on the left were “giving encouragement and succour to the terrorist fanatics who want to kill innocent people in this country”. Faruqi said in the court documents the program suggested he knowingly assists terrorist fanatics in Australia, condones the murder of innocent people by Islamic terrorists and that he encourages and facilitates terrorism.

Paps out for brekky hosts. The paps have been busy getting shots of brekky TV hosts over the past couple of days. The Daily Telegraph chose a rather odd front-page headline to describe its paparazzi shots of Lisa Wilkinson this morning: 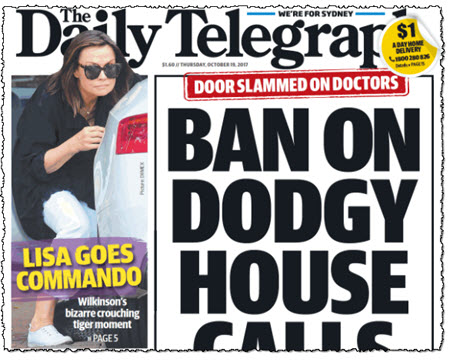 But Wilkinson’s TV rival (until Monday evening), Sam Armytage, is not out of the firing line, posting pictures on Instagram yesterday of a pap who had been hiding in the trees at her dog park, before coming out into full sight: 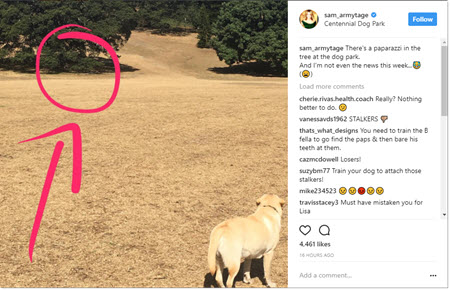 That spike in viewer numbers for Nines Today on Tuesday as the ghouls tuned in to see who would replace Lisa Wilkinson, was as I expected, a one day wonder. On Tuesday Today won nationally with 479,000 viewers and 301,000 in the metros to Sunrise’s 447,000 and 262,000. Yesterday morning Seven’s Sunrise was back in charge — 490,000 national viewers and 284,000 in the metros — and Today, 395,000 nationally and 261,000 in the metros. That has been par for the course from around May onwards. And while Seven News continues to win nationally, it’s been because of big wins in Adelaide and especially Perth. In the regions, particularly in Queensland. Nine has dominated in Sydney, Melbourne and Brisbane.

Fire on the front page … why such a sausage fest? … no longer fair and balanced … 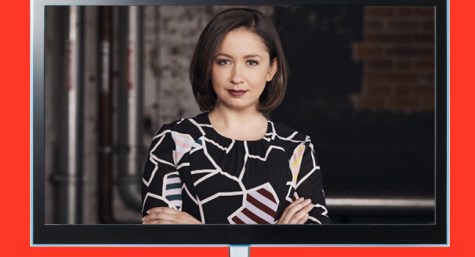 The show is called the Bachelorette, not the Bachette.