Was there a professional rivalry at the heart of Wilkinson's departure? ... Socialist Alternative slapped down ... lobbyists be lobbying ...

What really happened with Wilkinson? Amid all the media hype and typing about Lisa Wilkinson’s departure from Nine and move to Ten, there’s been a lot of spin by Nine. Wilkinson was said to want too much money, and had made it hard to pay her any more because of her writing for HuffPo and doing commercial work outside of Nine’s control.

Nine “sources” let slip that Wilkinson’s demands would have cost “10 producers” their jobs and that Nine couldn’t properly use her talents. There were suggestions that talks between Nine and Wilkinson and her agent, Nick Fordham had broken down and the last straw was the leaking of a story about the talks hitting a roadblock to The Sunday Telegraph in Sydney.

And yet while there is some truth to the story that the talks had ground to a halt in recent weeks, there was another reason why Wilkinson had grown sceptical of Nine and its CEO Hugh Marks. Sunday’s leak wasn’t the media story to examine for signs of problems in the relationship between Wilkinson and Nine, and Hugh Marks.

Go back to Wilkinson’s appearance at the Byron Bay Writers Festival in early August. It only got limited coverage, but it contains the genesis of her unease at what was happening at Nine.

Andrew Hornery reported in The Sydney Morning Herald at the time:

“Wilkinson dropped a bombshell: she had a mystery bete noire in the business, another woman who embarked on a ruthless campaign to take her down.

Wilkinson later told PS that she didn’t want her comments blown out of proportion, and declined to provide any further details on the woman she told the crowd had been after her job. She bluntly refused to name the perpetrator.”

“‘Like many women who’ve spent time in professional workplaces, I’ve come up against the occasional roadblock,’ Wilkinson said. ‘It comes with the territory.’

This is what she said at the festival, according to Hornery:

“It was Wilkinson, who had enjoyed years of ‘supportive’ relationships with other women during her time in magazines, who divulged that five years ago one woman had actively undermined her.

She did not name the woman and made it clear she did not work in television, however she was of considerable professional stature and media presence to infiltrate the corridors of power at Channel Nine. She was attempting to ‘take down’ one of the network’s biggest and best paid stars. According to Wilkinson, the mystery woman was after her job, though her ambitions failed.”

Now if you can identify the mystery woman and where she now works, you may have the real story as to why Lisa Wilkinson left Nine by joining the dots.

How to make friends and influence people (on Facebook). Is all publicity good publicity? That must be the philosophy of Strategic Political Counsel lobbyist Michael Kauter, who was the case study focus of a Fairfax piece on the dark world of lobbying on the weekend. The story by Mario Christodoulou and Patrick Begley looked at Kauter’s social media posts, promising access to politicians along with selfies with MPs of all stripes. It wasn’t a fluffy puff piece on the world of lobbying, and came at the start of a week where crossbench Senator Jacqui Lambie put forward a plan to overhaul the industry. So how does one deal with an unfavourable article about one’s social media posts? Post about it on social media, of course.

Kauter linked to the article on Saturday, writing: 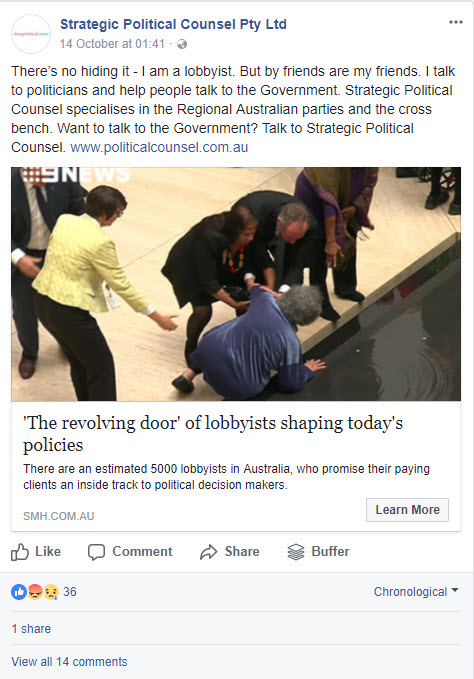 It also showed up in the feeds of people who don’t follow Kauter’s shopfront on Facebook — they paid for sponsored posts to make sure even more people saw that the company works in an industry that isn’t having the best week.

Throwback Thursday. Sometimes federal politics doesn’t feel that far away from Ms Tips days at the student union, with Senator Cory Bernardi using the upper house yesterday to make his feelings known about nothing less than the Russian Revolution and the Socialist Alternative group at a Canberra university. He moved:

“That the Senate—
(a) takes note of an event scheduled to occur on 26 October 2017 at the Australian National University entitled ‘Celebrating the 1917 Russian Revolution’, organised by Socialist Alternative;
(b) observes that this year marks 100 years since that revolution, which led to a litany of human rights abuses and approximately 10 million deaths;
(c) notes that the 1917 revolution promoted Leninist and Marxist teaching to the broader world; and
(d) rejects any assertion that the teachings of Lenin or Marx should be celebrated in a liberal democracy.

All good fun, but what has Bernardi to do with “a liberal democracy”?