Nine has launched its counter-attack on Lisa Wilkinson after she spectacularly defected to the Ten Network, and the Daily Mail is covering all angles of the story.

Today in Media Files, Nine has launched its counter-attack on Lisa Wilkinson after she spectacularly defected to the Ten Network, and the Daily Mail is covering all angles of the story.

Nine goes after Lisa. Now for the counter-attacks against Lisa Wilkinson, starting with the outrageous suggestion in a Sydney Morning Herald gossip column. A “senior network insider” told the newspaper that Wilkinson’s pay increase would cost 10 jobs at the network. Nine CEO Hugh Marks made similar comments to The Daily Telegraph, saying he could invest the extra money in junior journalists.

We didn’t hear the Nine sources complaining that Karl Stefanovic was going to cost “10 producers’ jobs” in 2015 when he signed his three-year contract with a reported $2 million a year. But a woman departs after wanting pay equity because she is doing the job and proving to be more reliable than her male co-host and she’s a threat to jobs.

And it’s hard to believe the whining from Marks in the News Corp papers that Nine didn’t “control” all of Wilkinson because of her work for “niche online publication” The Huffington Post. That’s Nine and Marks’ fault for not paying her more money in exchange for those rights. It is a simple equation. There’s a good chance that in exchange for more money Wilkinson would have given up those rights years ago when previous contracts with her were struck.

Unlike Stefanovic, Wilkinson was always there at Today, she didn’t flee Sydney to James Packer’s boats in Europe or the South Pacific, and she wasn’t a touch Brahms and Lizst after the Logies, as Karl was. It’s hard to believe viewers will get behind the very public attacks on someone they have been sharing their mornings with and who has publicly stood up for gender pay equality. Nine’s problem with Wilkinson is that Marks and others took her for granted and didn’t listen to her talk of wanting new challenges. Now she has her chance at Ten and we are left feeling that Nine is smacking down an “uppity woman” for asserting her rights in a male-dominated industry. –– Glenn Dyer

NRL Footy Show shake-up. In other Nine movements, the NRL footy show is facing a shake-up, with long-time host Paul “Fatty” Vautin kicked from the panel. Nine has said the panel will be refreshed, but rising star Erin Molan is slated to take a key role in the new format.

Daily Mail‘s blanket Lisa coverage. Daily Mail Australia has left no stone unturned in its extensive coverage of Lisa Wilkinson’s move to Ten, announced on Monday night. This morning, there were no fewer than 26 separate stories ranked on the homepage about Wilkinson’s defection, including a story written around pictures of Today boss Mark Calvert asleep in an airport lounge, memes posted online about the move and Wilkinson’s “secret feud” with co-host Karl Stefanovic. 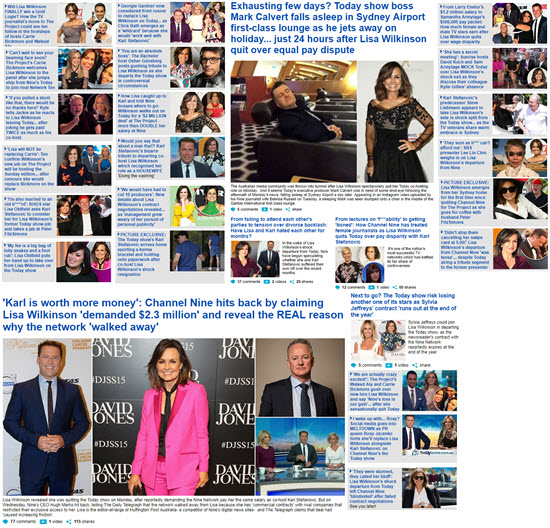 NRL player wins Tele defamation suit. A former rugby league power has won a defamation case against The Daily Telegraph, with settlement terms confidential. Brett Stewart sued for defamation over an online article published for a few hours in June last year that linked him to match-fixing allegations, according to The Sydney Morning Herald. The former Manly Sea Eagles star said the article implied he’d been involved in match-fixing, or that his coach suspected he had been, and that it damaged his character, reputation and career.

‘Get the time booked off.’ BBC newsreader Simon McCoy has given yet another underwhelmed performance while reporting on the expected due date for the Duke and Duchess of Cambridge’s third baby. Announcing the news, he said, “I’m not sure how much news this really is,” before telling viewers he’d be booking time off in April, when the baby is due to be born. 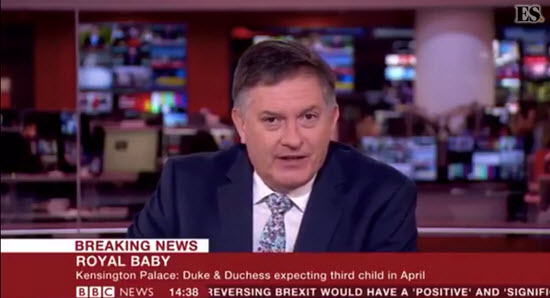 McCoy has previously expressed his disdain for royal baby news: when reporting from outside the Lindo Wing while Kate was in labour before giving birth to Prince George, he opened his live cross with, “Plenty more to come from here, none of it news.”

He’s not generally a fan of stories he doesn’t consider news, showing a similar attitude towards a report about surfing dogs included on his program during a news-light summer.

Glenn Dyer’s TV Ratings. Here’s a thought for the TV executives in this country looking to boost the flagging ratings of a meandering favourite — sack/let go/underpay a female co-host and watch the numbers jump after the publicity explodes and people tune in to see what the fuss is about. That’s how it played out yesterday, anyway, with the surprise departure of Lisa Wilkinson from Today on Monday night. Yesterday, morning Today’s audience jumped — to 479,000 from 422,000 viewers on Monday, whereas Sunrise went backwards, from 491,000 to 447,000. But it will be, of course, a short-term help. What will be now of interest are the figures for Wednesday onwards and what happens as Nine starts looking for a new host.

Will Sophie ride to the rescue of the struggling Ten network once again — as she has done now for the past month — with her latest boy juggling on The Bachette? After three straight losses for third place to the ABC (last night’s was tiny, but a real loss, especially against the usually weak Tuesday night for the ABC). Soph’s rescue mission will be vitally needed, as will the arrival of Lisa Wilkinson. Nine’s The Block again carved up the night and it was thanks to it that the (faltering) Big Bang Theory and the repeat of Kath and Kim did so well, helping Nine to the easiest of wins.

Tonight I recommend you watch Sunshine on SBS. — Read the rest on the Crikey website