Everybody wants credit for this new energy policy ... academic may have ulterior motives ... the kiwis are taking over

Kissane that credibility goodbye. Yesterday in the Victorian Legislative Assembly, debated raged about the Andrews Goverment’s assisted dying bill.  Apart from an unbearable “youth in Asia” gag from MP for Rowville and opponent Kim Wells — “I remember some years ago my son came home and said he had to a project on euthanasia and he needed my help. I said to him ‘where would you like to start?’ He said, ‘I think I’ll talk about a 14 year old boy growing up in Singapore…'” — there was a note-worthy contribution from member for Forest Hill Neil Angus, who raised the mental health risks contained in the Bill. As part of this, he name checked Monash University Professor David Kissane who wrote a letter to all MPs that detailed his opposition to the framework. Kissane has been influential for euthanasia opponents — he was cited previously in the debate in South Australia, where similar legislation was narrowly knocked back last year. In the letter (on Monash letterhead) Kissane represented his concerns as those of a prominent psychiatrist and researcher– as such, so did Angus:

The fact that depression and mental health issues are not adequately considered in the bill highlights to me one of the glaring deficiencies of the bill. The need to consider mental health issues when considering legislation of this nature was extremely well articulated in the evidence given to the Victorian parliamentary Standing Committee on Legal and Social Issues at its hearing on 15 October 2015. This evidence from Professor David Kissane, an expert psychiatrist with over 40 years experience from the department of psychiatry at Monash University, went into great detail regarding mental health issues and considerations. He said, and I quote: ‘… many patients who seek to hasten their death have undiagnosed psychiatric disorders, such as clinical depression or adjustment disorders with demoralisation, which can underpin their suicidal thinking. I do not believe this bill has adequate safeguards in place to address the issues Professor Kissane raised in his evidence<

What Kissane’s letter does not disclose, and not mentioned by the people citing him, is the fact that he is the Australian rep of the Knights of Malta, an aristocratic Catholic Opus Dei-type institution established to defend the faith:</ 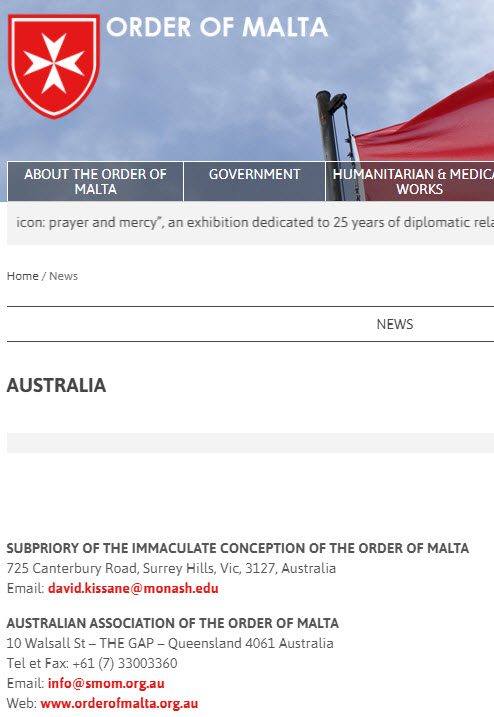 Taking credit for NEG-cellent policy. Like any policy in the realm of energy and environment proposed by any government of any stripe in the last, oh, forever, the national energy guarantee (which, wonderfully, acronymises as NEG) has received a mixed response. The Labor states — who have to sign up and implement it — don’t like it, the pro-coal MPs are happy (or as happy as they ever are) and the commentariat are mostly calling it a small, temporary win for Prime Minister Malcolm Turnbull. So, if this turns out to be the first successful neg since about 2007, who takes credit? Well, a few people as it happens.

Firstly there was One Nation’s Malcolm Roberts, who demonstrated his usual consistency by claiming credit for the new policy (delighting that One Nation had forced the government to talk about Coal and ditch the renewable energy target) and then spending seemingly ever minute since on Twitter complaining about it — expressing particular worry that there was no difference between the RET and the “emissions guarantee”.

The Young Liberal movement of Australia were less equivocal, sending an email from president Aiden Depiazzi out to members claiming the ditching of the RET was the Young Libs delivering on “another policy priority”, crowing:

“At Young Liberal Federal Council in January, the Movement adopted a motion to call upon the Federal Government to abolish the Renewable Energy Target to secure the reliability and the affordability of Australia’s energy supply. Shortly thereafter, our Policy Chairman Josh Manuatu wrote to Josh Frydenberg and we have since raised the matter in meetings with the Prime Minister, Ministers, Members and Senators.”

This follows their “strong advocacy” on drug testing welfare recipients, and freedom of speech (wait, the freedom crushing 18C debate was lost, surely?)

As for the person we all assume this is actually for? Energy and Environment Minister Josh Frydenberg, denied the policy was designed to placate our helpful former PM Tony Abbott (or that it had been successful, calling Abbott a “conscientious objector”on Sky News this morning). For his own part, Abbott was relatively reserved, tweeting yesterday “Progress at today’s party room. The Clean Energy Target has been definitively dropped”.

Banking on the Kiwis. Have we just had new chair of the ANZ Banking Group appointed? The bank announced this morning that former New Zealand Prime Minister John Key would become chair of its New Zealand banking operations. First up is his appointment to the ANZ NZ board and then the chair role next January when the incumbent, John Judge, retires. Now this is only the chair’s role across the Tasman, but Australian banking is dominated by Kiwis at the moment and there is nothing to stop Key replacing the current chair, David Gonski, in the C-Suite in Melbourne.

ANZ itself has a Kiwi CEO in Shayne Elliott, Andrew Thorburn is another at NAB, while Ian Narev at the money launders (AKA the Commonwealth Bank) is yet another from across the Tasman, even if his time is up. And Key would be perhaps the best fit for a chair in Australian banking — after all it’s his profession. Key started his career in banking and finance in New Zealand before heading overseas where he became head of global foreign exchange with Merrill Lynch. He was also made a member of the Foreign Exchange Committee of the Federal Reserve Bank of New York.

Did Wells try to belt out Chisel’s “Star Hotel”?