The ABC is preparing for yet another restructure announcement, where it's likely to make changes to increase communication and content between its silos.

The ABC’s upcoming restructure will mark a concerted shift away from its strict television and radio broadcasting divisions, focusing instead on cross-platform content and new technology, internal documents obtained by Crikey show. The specifics of the restructure are still being nutted out, and it’s unclear what effect the major restructure planned by managing director Michelle Guthrie will have on the ABC’s budget, or jobs, but it is believed that it will have a big impact on who wields power within the organisation.

In announcing the changes to staff, news director Gaven Morris said it reflected the ABC’s investment in quality journalism.

But this was just a precursor to a much bigger restructure to be announced in the next month or so. Content teams and workflows will be reorganised, and it’s likely to further break down the “silos” of the ABC’s divisions to reduce duplication, as well as trying to reach audiences outside of the traditional platforms of TV and radio. 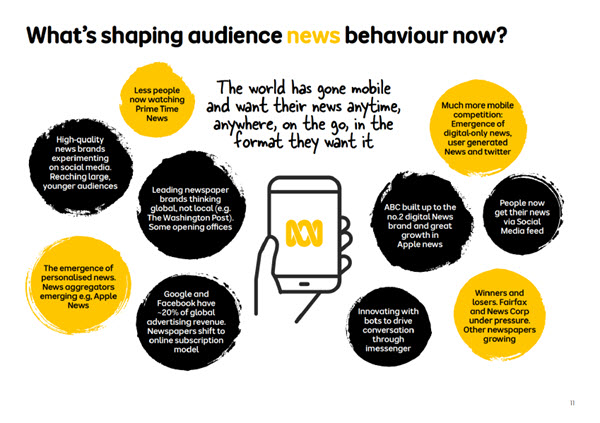 TV audiences down, VR and AI are the way of the future

Management has been consulting staff over the past few months regarding workflows. In an internal briefing presentation for content teams obtained by Crikey, the ABC has emphasised its changing audiences:

“We’ve always made great television and radio and will continue to do so. This won’t stop. But with the decline in broadcast platforms in recent years, we’re no longer organised for the ways in which our audiences consume media,” the presentation says. “We think there are better ways of organising ourselves that will support higher levels of collaboration and creativity, to deliver more outstanding content for distribution across a wider range of platforms.”

The presentation outlines the loss of audiences from TV (seen across all networks), but may allay some fears about losing radio networks: it says that while podcast audiences are increasing, they’re still niche, and radio audiences haven’t dropped as much as TV audiences.

The document acknowledges that audiences for primetime news has dropped, with more competition, and people wanting to get news on the go and on demand.

It identifies five media trends it will be watching: machine learning and artificial intelligence; conversational user interfaces (CUIs); augmented and virtual realities; home hubs; and connected and self-driving cars. It suggests the ABC should aim to be the default option for news headlines on CUI platforms — such as its Facebook Messenger news bot, which is text-based and interactive on the social media site. The news and research and development (R&D) divisions are already working on a project to “explore how to best modularise audio content to support personalised voice-based CUI experiences”. 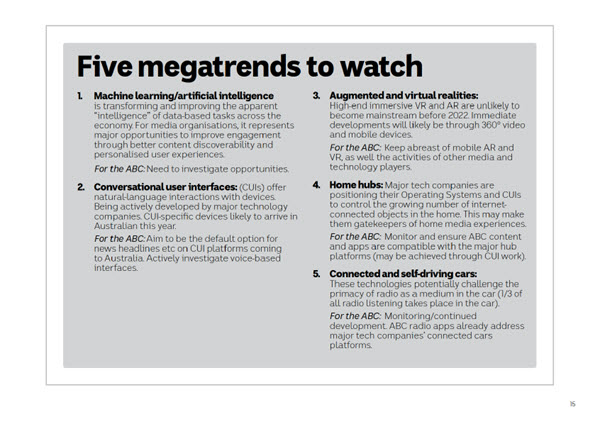 Since Michelle Guthrie started as managing director, she has repeatedly spoken of her plan to make the ABC more relevant for demographics besides young children and the over-55s, and for ABC content to be available where audiences are. The ABC has been repeatedly criticised for using Google ads to promote its content from the commercial publishers and broadcasters, who think the ABC shouldn’t be competing for clicks.

In a speech to the ABC Friends conference earlier this month, Guthrie said her goal was to reach audiences according to their behaviour.

“I have one overarching ambition and I have stated it consistently since I started nearly 18 months ago. That is, to make the ABC as relevant (or more so) to my children and their children … Audiences are shifting in their viewing and listening behaviours.”

She said the restructure would involve reorganising the content divisions “to adapt to the shifts in the media sector”.

She has previously said there needed to be more interaction and collaboration between the ABC’s silos, but was adamant in the speech that networks wouldn’t be shutting down — an oft-repeated fear is that Radio National and Classic FM could be shutting down.

The new reporting teams — a restructure of the national reporting team — will be cross-platform, working on stories across TV, radio and online in their specialities. The ABC also recently introduced an audio current affairs manager, overseeing flagship programs on Radio National and radio current affairs, which sits in the news division.

The ABC’s divisions have not traditionally shared content or resources, and to outsiders, duplication among programs, regions and networks can be confusing. A review of the ABC’s interviews with former US vice president Al Gore while promoting his new film, An Inconvenient Sequel: Truth to Power, found that instead of seven separate interviews across a couple of days, just two would have yielded the same benefit to the audience. Guthrie responded to the review by saying that while localisation was important, it needed to be balanced by the appropriate allocation of resources. She also threw forward to the re-organisation, saying:  “I also note, that the intention of the renewed content team organisation is to reduce unnecessary duplication”.

Guthrie has also been indicating an investment in new technology and transforming the broadcaster for the changing ways audiences consume the ABC’s content. The ABC has partnered with Google and the Walkley Foundation in advertising for two Google News Fellows, who will be “creative technologists” to work on storytelling projects in the ABC’s newsrooms.

University of Sydney lecturer Fiona Martin told Crikey that the ABC needed a shake-up, but its success would really depend on how well the changes and requirements of staff are communicated.

“The ABC is good at restructures but not very good at changing communications strategies,” Martin said. “One of the issues the ABC has always had is talking across networks — more communication between the networks would never be a bad thing.”

ABC restructure not about cutting programs or costs, Guthrie says in major announcement

Staff fears ABC cuts are thin end of the wedge

“VR and AI are the way of the future.”

We go to the ABC for news and current affairs. The ABC doesn’t to need to chase us around ever-changing fads. The ways we use to go to the ABC are our TV screens and our wireless sets, not “apps” on silly little hand held screens (especially when we’re driving). The ‘restructuring’ is already set to deprive us of programmes of rigour and depth such as Lateline in which the world’s movers and shakers talk directly to *us* via the presenters. Those “restructurers” the LNP government has imposed on ABC management have already debased Lateline into a kaleidoscope of gimmicky pieces of footage with neither coherence nor depth nor relevance, and even the serious part is becoming a platform for peddling the wares of outfits like the Brussels Eurocracy.
Since ABC TV is so chock full of house ads maybe a house ad it might present frequently and prominently would be a clear message inviting feedback and showing how to do so using standard means with real sentences in writing (i.e. not just a hand-held “app” or a long wait on a phone call to nowhere). And please, not merely through Facebook unless at least they display a URL for their relevant Facebook page.

I access the ABC through the handheld apps. Being integrated into Alexa or Siri makes a lot of sense. I think their approach is sensible given our “always connected” state. They aren’t limiting the older methods.
But I do regret the loss of Lateline.

Do you? I check the ABC on my handheld device (phone or iPad) when I wake up and when they send me a breaking news update as they did this morning. I wish there was more to read and not so much on video. I find reading better for absorbing the news at my own pace.

I listen to the radio in the car (classic fm, news radio), but not at home – I don’t think we have a ‘wireless’ set in the house, and the streamed radio is out of sync with the car as I don’t live in the dominant timezone.
No TV.

I like the ABC website now that it has allowed commenting again – not sure if this is available via the app.

Note, ABC, that we have to comment in text, not sound or video. It is still a powerful means of communication.

Respectfully, I use the apps on multiple silly little screens and I think you’ll find I am not the only one that does

I have neither desire or need to further facilitate a constant stream of mindless, intrusive information via a “comfort blanket” hand held communication tool that in effect is designed to steal both privacy and individuality. In short, a tool that re-prioritizes my understanding, functioning; even who am and who are, those that I value around me. Acceptance of technology does not mean obsession or subjugation. Guthrie is a false prophet and her aim is pure commercialisation of content. Slowly but surely OUR ABC is being employed against health, social interaction and creative expression. As am sure Jack R would say . . . “F . . . O . . !

I’ll go with 2 for sure (Not an AFL person). I cannot bloody afford to stream stuff, as I do not live in a big town. I listen to radio national but not as much since they buggered their good music shows and have lazy female journalists at key times who do not do their homework. Give me back Ellen Fanning. Bring back James Carlton, More Hamish McD. And please stop the endless repeats of “life matters’. It it often interesting, but not 3 times in 24 hours!