The revolving door. Kim Doherty, who left her gig as editor from The Australian Women’s Weekly after just a year in the job, has been named the new editor of Sydney suburban glossy mag the Wentworth Courier. The News Corp local paper covers the flashy eastern suburbs, including Prime Minister Malcolm Turnbull’s electorate. With some of the country’s most powerful people in its circulation, the paper has nailed down interviews with some of its high-profile locals. In the lead-up to his campaign for the NSW RSL presidency, Malcolm Turnbull’s son-in-law James Brown appeared in a cosy profile about his family for an Anzac Day report earlier this year, and former Nine boss David Leckie’s wife Skye unleashed on embattled Seven CEO Tim Worner in a profile on her in April.

The Courier‘s editor Steve Howard is shifting to the same role at News Corp’s Manly Daily, replacing Nick Calacouras, who has moved to News Corp’s HQ in Surry Hills as the Daily Telegraph‘s digital editor.

Award cancelled after controversy. Earlier this year Crikey reported on the way in which the new LGBTI Awards were commercialising their activism. The group were spamming journalists and activists with nominations for the awards, leading to some journos especially criticising the process where they need to pay big dollars for tickets before finding out if they have made it to a shortlist. Yesterday the nominees were told if they had made it to the shortlist, but the journalism category had been cut all together. The email from the awards’ director Silke Bader said:

“We contacted you in regards to your own personal nomination we received for the Journalism category. After many discussions and feedback we received, we decided it was in the best interest of this category NOT to be judged by the public or a Judging panel not related to Media.

Therefore we removed the category “Journalism” for the 2018 LGBTI Awards, and are considering to launch a MEDIA Award in 2018/19. We believe that acknowledging the amazing work that has been done in the media industry will best represented by its own awards program.

We apologise for the late notice – and appreciate that some of you might be disappointed.” 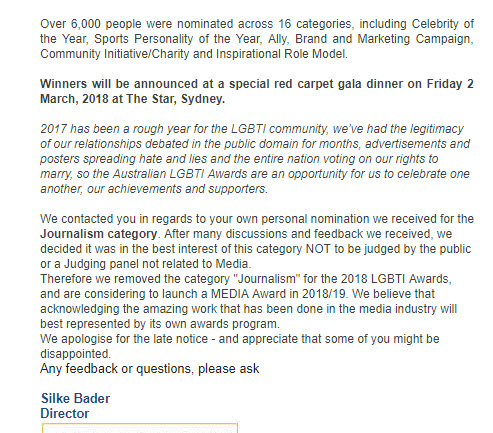 A fight the ACL can’t win. The Australian Christian Lobby’s new legal arm has lost its first high profile case, with a Melbourne mother found guilty of breaching a safe access zone around an abortion clinic and fined $5000. Crikey has reported on the case of Kathy Clubb before, where the mother of 13 handed out pamphlets to a couple outside an abortion clinic in August 2016, becoming the first person to be charged and now convicted under the laws. She was supported in her case by the Human Rights Law Alliance, a legal group started by the Australian Christian Lobby and modeled on the American Alliance Defending Freedom. The ADF has been a powerful force in the US legal system, but it remains to be seen if the Human Rights Law Alliance will be as powerful here.

Hilton accommodates ‘traditional marriage’. Speaking of the ACL, Ms Tips noted with interest that Hilton Sydney is hosting the Australian Christian Lobby’s ‘Embolden’ conference on November 17. Coming just after the marriage equality postal survey results are to be announced and featuring speakers such as Senator Cory Bernardi, Senator-but-for-how-long Matt Canavan, ACL spokesman Lyle Shelton and the Australian’s Greg Sheridan.  Hilton International has put out a statement in support of the LGBT community: “At Hilton, we are proud to support the LGBT community as a way to further the Hilton brand promise of ensuring that every guest feels cared for, valued and respected”, but the company hasn’t made a statement one way or another on the subject of marriage equality in Australia. Indeed, it’s not the first Australia Hilton to host an advocate of retaining the current definition of marriage —  Margaret Court spoke there during her long period of being silenced in marriage equality back in September.

Bah humbug. There are many stories around about just how dire things are at major retailer Myer, but a caller to 3AW this morning suggests the department store has halved the budget for this year’s Christmas windows display at the Bourke St Mall store. Is that the canary in the coalmine?