'Contributor Namy's' latest column raises some eyebrows. Plus other media tidbits of the day.

Sex and the Top End. Our favourite newspaper the NT News has introduced an exciting new column to its revamped Saturday edition: a dating column. The column is written by Craig Dunlop, the paper’s court reporter, but whose claim to fame is the romantic yarn of a kangaroo humping a pig. Dunlop was also last year a finalist in Cosmo‘s bachelor of the year competition, after he was nominated as a joke. In a profile for his paper at the time, a “woman from his past” was quoted, giving him a less than ringing endorsement:

“As a woman who has slept with him, I did consider batting for the other team afterwards. He’s a gentle lover, like a lady, but if I want to sleep with a lady, I want boobs attached. He’s also literally the hairiest man I have ever seen. It’s like he was dunked in Regaine as a child.”

In Saturday’s column, Dunlop advised readers to take advantage of mango season for a date idea, ending on this note:

“If the worst happens and the subject of your lust is not interested in daiquiris (or you), then you’ve not really lost out, since you’ve got yourself a blender full of mango and rum to drink alone. There’s nothing quite like a strong, refreshing, tropical drink to help deal with the pain of rejection.”

We look forward to more Carrie Bradshaw-style musings on dating in the Top End.

Good feud guide. Shock jock Ray Hadley has launched a fresh attack on Fairfax Media and Southern Cross Austereo after he says his program was censored over advertising conflicts. Hadley had been broadcasting about a court case in Orange, New South Wales, regarding a truck driver involved in a fatal accident and employed by West Orange Motors, an advertiser on the local Triple M station and in the local Fairfax Central Western Daily newspaper. The Australian reports Southern Cross Austereo said it had legal advice it couldn’t broadcast the segment as the case was still before the courts. But Hadley has accused the station, which carries his program, of censorship:

“I love my regional listeners. If Southern Cross want to continue to act in this petulant way, and then tell lies ‘Oh he is talking about a case we can’t talk about’. That’s just a lie. It’s a sponsor’s deal,” he said.

‘Contributor Namy’. The Guardian‘s columnist Rafael Behr was given an intriguing nom de plume in its print edition yesterday: 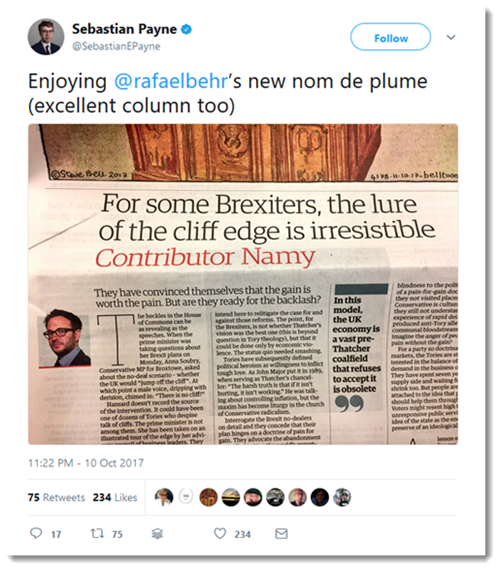 Streaming royalties bump music revenue. Like its counterparts in the US and UK, streaming royalties online music businesses has helped save the Australian music industry, giving it a bigger than expected bump in revenue for the year to June. Figures from APRA AMCOS show that of the $386.6 million in revenue received in 2016-17, digital royalties contributed $110.3 million, an increase of $42.5 million on the previous year.

Of that figure, total royalties payable to songwriters, publishers and affiliated societies (or net distributable revenue) jumped 17.7% to $335.9 million in the year to June.

APRA said that streaming royalties more than doubled to $62.2 million, a rise of 127% year on year, overseas royalties were up a respectable 13% to $43.5 million, while video on demand royalties surged 69% to $14.1 million and live music royalties rose just on 16% to $20.4 million. On top of that, APRA said that $6.7 million in live performance royalties were paid to 13,884 members, 88% of whom are unpublished members.

Brett Cottle, chief executive said in a statement: “The rise and rise of consumer subscriptions to music and video streaming services was the key factor underpinning our revenue growth during the year … Streaming has given Australian songwriters and composers unprecedented access to a global audience. Growth in royalties earned overseas saw 1,576 more APRA members receive a royalty payment in FY 16/17.” — Glenn Dyer

Jail sentence for journo in Turkey. A Wall Street Journal reporter has been sentenced to jail time in Turkey, with a court finding she has “engaged in terrorist propaganda in support of a banned Kurdish separatist organization” in an article for the paper. The Journal reports Ayla Albayrak is currently in New York, but was sentenced to more than two years in jail, which she plans to appeal. Editor-in-chief Gerard Baker said: “This was an unfounded criminal charge and wildly inappropriate conviction that wrongly singled out a balanced Wall Street Journal report. The sole purpose of the article was to provide objective and independent reporting on events in Turkey, and it succeeded.”

The charges were laid over an article about conflict between the Turkish state and the outlawed Kurdish Workers’ Party, which is considered a terrorist organisation.

Fox’s World Cup plans dashed. Ouch! 21st Century Fox’s carefully plotted campaign to screen the 2018 soccer World Cup — with the USA as one of the 32 finalists — for the first major coverage of the men’s cup has come tumbling down, with the share price overnight Wednesday falling 2.5%, wiping $US1.2 billion off the value of the Murdoch family’s key company.

The USA’s 2-1 defeat by tiddlers (and last placed in the competition group), Trinidad & Tobago on Tuesday has ruined the ambitions of Fox to run a massive coverage of the Word Cup. The company had planned 350 hours of coverage in the northern summer of 2018. Now it is stuck with those plans and no incentive for America’s notoriously insular sports fans to watch.

Fox has spent $US425 million to buy the US broadcasting rights to the Cup with the plan to boost its Fox Sports operation. Fox bought the rights to the World Cup in the US from 2015 through to 2026. That means they missed the 2015 World Cup which was broadcast by ESPN (but the 2015 Women’s World Cup was the first telecast in this contract). Next year’s cup was to be the first men’s World Cup for Fox, with the USA as the centrepiece (at least for its three first-round pool games).

But all that is up in smoke after the US failed to qualify for the first time in more than 30 years. But an own goal proved the difference. Panama and Honduras both won their qualifiers Tuesday, dropping the US to fifth place in its group. Panama in fact clinched a dramatic 87th-minute victory at home to the already qualified Costa Rica to seal the final automatic qualification spot for Russia 2018 and reach the World Cup for the first time in their history. Honduras will now play Australia in another qualifying round. — Glenn Dyer

Glenn Dyer’s TV Ratings. Thanks Sophie for another entertaining evening. The Bachette is such a good-hearted romp with all the faux seriousness of the Bach and previous series of the Bachette tossed overboard — hopefully never to return. It’s a pity there wasn’t a dingo onesie for last night’s ep — we all know who would have been wearing that one. The Bachette had 1.07 million national viewers, with 840,000 in the metros and only 239,000 in the regions.

That’s not a snake, this is a snake … everyone votes Green … Stefanovic’s big switch? …

Is there any reason to own shares in Fox/News (whatever it’s actually called)? With family and executives blowing $US425m after the pissing up $AU600-700m on Ten?!?!?! Why don’t those tools just invest where they couldn’t possibly screw up, like an existing tollway or a sandpit or something?