The broad multi-faith prayer room: where does your god stand on marriage equality?

After Michael Bradley, in Crikey, poked holes in the argument that religious freedoms are under threat from the prospect of marriage equality, Jo Jordan, presiding clerk for the Religious Society of Friends (better known as the Quakers) wrote in to politely point out that there was an impingement on religious freedoms in the Marriage Act as it stood:

“Michael Bradley’s excellent analysis of religious freedom in Australia fell short in one respect: it did not recognise the impact of the Marriage Act on religions that support marriage equality.

“The Religious Society of Friends (Quakers) is currently prevented by law from facilitating the same legal recognition for the same-sex marriages that we do for other marriages. A vote for same sex marriage would remove this prohibition and would, therefore, be a vote for religious freedom. In the discussion of equal rights for all, we hope that religion can earn its place at the table.”

While much of what we’ve heard from religious activists has been in the No camp, of course the religious world is far from a monolith. Australian Christians for Marriage Equality is a collection of churches and individuals of various Christian denominations in favour of change, often in contrast to the higher authorities of their churches. Here’s a round up of the different faiths and their various public stances.

The Anglican church has no set position on homosexuality, and perhaps this is why they appear to have one of the more fractured approaches to marriage equality. Many individual Anglican churches have come out in favour —  Very Reverend Dr Peter Catt of St John’s in Brisbane has been a vocal advocate, as is Anglican Bishop of Ballarat Garry Weatherill, and Father Peter Manuel in Perth.

In contrast, the Anglican Church of Australia’s General Synod in September criticised the Scottish Episcopal Church over its decision to conduct same-sex marriages — passing a motion that said:

“The General Synod notes with regret that this step is contrary to the doctrine of our Church and the teaching of Christ that, in marriage, ‘a man will leave his father and mother and be united to his wife, and the two will become one flesh’ (Matt 19:6); and prays that the Scottish Episcopal Church will return to the doctrine of Christ in this matter and that impaired relationships will be restored.”

Further, the Archbishop of the Anglican Diocese of Sydney Glenn Davies has been revealed by BuzzFeed to have donated $1 million to the No campaign; it has been noted with some grim irony that on the same day he announced the church had unilaterally thrown a million dollars at preventing a group of people getting married, Davies had tweeted urging people to “pray and give generously” to an appeal helping victims of the Ambae Island volcano. 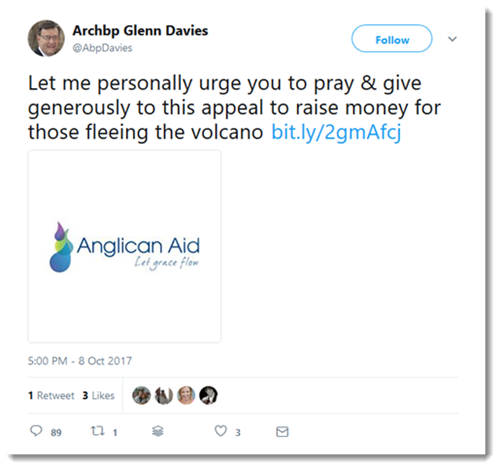 Pope Francis has gotten the Catholic Church good PR for his generally accessible and progressive approach — not the least of which was his declaration in 2013 that the church should talk less about sexuality. This was taken as a major step forward, but it’s worth noting that this changed nothing about the doctrinal approach to the subject, just the emphasis it received. In 2016, his Apostolic Exhortation “strongly reaffirmed” the Catholic Church’s position that homosexual unions are in no way equal to heterosexual marriages.

In Australia, Archbishop of Melbourne Denis Hart told Fairfax that church employees who conduct same-sex marriages could be fired, saying”Our teachers, our parish employees are expected totally to uphold the Catholic faith and what we believe about marriage. People have to see in words and in example that our teaching of marriage is underlined.”

However, according to research (albeit done by the equality campaign), this official position has not filtered down to Catholic adherents, who are only slightly less likely to support marriage equality than the non-religious. However, there are no individual Catholic Churches who have signed up to the Christians for Marriage Equality movement (there is the Ecumenical Catholic Church, whose teachings are similar, but who aren’t under the jurisdiction of the Vatican, and Acceptance Melbourne, a support group for LGBTIQ Catholics in Australia).

Representatives of Islam have been largely quiet on the issue of marriage equality. The Australian National Imams Council put out a statement early in the debate “affirming that Islam sanctifies marriage as only being between a man a woman”, but we have not had any of the high profile campaigning or media appearances from Islamic leaders that we have from Christians.

Ali Kadri, spokesman for the Australian Federation of Islamic Councils told the ABC back at the end of August that this was largely a political consideration:

“Unfortunately, in the current climate, the right and conservative side has attacked Muslims as terrorists and extremists, and naturally the left side has been allies in defending us for a long period of time,” he said.

“We are afraid if we come out with our opinion then the left may abandon us for going against their view and we can’t be friendly with the conservatives because they have been bashing us for 15, 20 years every chance they get … and that includes some Christian sects as well.”

However Islam is just as schismatic as any Major religion — the group Muslims for Marriage Equality have been working against homophobia within the Islamic community.

Like the other monotheism in Australia, the reaction to marriage equality within Judaism has been split roughly between orthodox and progressive practitioners — although like Anglicans, it has had the most representative bodies and religious leaders come out in favour.

The Rabbinical Council of Victoria issued an unequivocal statement urging people to vote No in the postal survey:

“Our Torah clearly upholds traditional heterosexual marriage as the ideal family unit and we are concerned regarding the impact that a change in the definition of marriage will have upon the strength of this fundamental societal building block.”

A member of the council promptly quit and council president Rabbi Daniel Rabin issued an apology to the community for the statement. “The RCV should not have told people how to vote and refrained from making a divisive statement,” Rabin said. “The statement has caused immense anger and pain and has alienated many who already feel isolated within the community.”

The Executive Council of Australian Jewry (and many individual synagogues) have since publicly rejected the statement.

Despite being the third largest religion in Australia at the most recent count (a long way behind Christianity and just behind Islam) Buddhists in Australia have not been asked their thoughts on marriage equality much since the debate began, perhaps because they’ve been so quietly consistent on the matter. In 2012 submission to a House of Representative public hearing on marriage equality, the Federation of Australian Buddhist Councils stated:

“The fact is that the rite of marriage existed before religion, and thus no one faith can legitimately claim ownership of it. The suggestion that a civil contract is good enough for gays and lesbians is like throwing crumbs to the hungry. It is not acceptable to them, or to any other clear-thinking person.”

The council opposed the plebiscite, and in September this year reaffirmed their support for marriage equality.

The Australian Council of Hindu Clergy has taken the official line that marriage as defined by Hindu doctrine as “between a man and a woman for the purpose of performing their duties (dharma), i.e. fulfilling their obligations towards their families, societies, professions and the environment. For the birthing and raising of worthy progeny …”

So that seems pretty clear; they’d be against changing marriage legislation, right? Nope. The statement goes on:

We understand marriage according to the Australian secular Law is NOT a sacrament (samskara), and it is about the legal union of two persons and involves social security, inheritance of property, legal and human rights and social privileges. It has nothing to do with vivaha as interpreted by Shastra — the two concepts are separate — the religious vs the secular….We totally support human rights and equality of gender within the secular Australian society in which we live, and have no opposition whatsoever to any changes in the law and the legal definition of marriage that the democratic society deems necessary for the well-being and happiness of all citizens whatever be their gender.

So is it possible that a religion could define marriage as between a man and a woman, and not feel that a secular state such as Australia ought to legislate marriage based on a religious definition? That seems a sensible, almost shatteringly obvious, position now that you mention it.

With God on their side: when religion and politics collide

The Quakers respond to Michael Bradley

It’s extraordinary that Archbishop Glenn Davies’ $1M donation to the ‘no’ case hasn’t been more widely reported & scrutinised. Surely the money would have been better value invested in the homeless or the suffering. Jesus.

Hey, why’d you leave out the Uniting Church? We are modelling how churches can live with different opinions on marriage equality. We also have lots of church buildings with rainbow flags indicating that all people INCLUDING
LGBTIQ people are welcome. Sadly, since the horrible postal poll campaign started some of these flags have been slashed by people who cannot be ‘No’ voters – because the Murdoch press tell us that ‘No’ voters all behave impeccably at all times.

I can’t hear my God over all the arseholes in between – but I can guess.

The statement from the Hindu Clergy is right on!
We are talking about a SECULAR change in the law here…NOTHING to do with any religion…and as an atheist, all this talk about religion offends me.
I couldn’t give a shite what ANY religion says, thinks or does about SSM…it does not concern them!

YeahCML, like U I think it is a lot of crap.
However I can not but be astounded by the contradictions on the part of the so called Christians. Also applying to Islam and Judasim, they are all three “People of the Book.”
According to that Book God hates Sodomites,People who spill their seed upon barren ground, and other defined Deviates.
So how can the Bible followers accept Homosexuality, the Bible is ” Gods Word ” ,and according to that God has a massive DOWN on Homosexuals?

Christians should follow the “new” testament (the teachings of Jesus) and not dwell on the “old”. Everyone would get on a lot better if they did (whether they believe Jesus existed or not).

You beat me to it. The marriage act is nothing to do with religion. Muslims and Catholics and whatevers can continue to restrict their service to between man and woman only and call it whatever they want, but “marriage” as defined is a secular institution.