Keeping track of Tony Abbott's views on climate change can be a tough task. So we've assembled the most comprehensive list of climate positions since the days of Julius Caesar and Jesus of Nazareth.

A self-declared weathervane on climate change, Tony Abbott has held multiple positions on the subject in recent years. Confused about where he really stands? Crikey has you covered. Here’s the complete list:

“And, I am, as you know, hugely unconvinced by the so-called settled science on climate change.” (2009)

“So far reality has stubbornly refused to conform to the Intergovernmental Panel on Climate Change’s computer modelling.” (2017)

“The climate has changed over the eons and we know from history, at the time of Julius Caesar and Jesus of Nazareth,  the climate was considerably warmer than it is now. And then during what they called the Dark Ages it was colder. Then there was the medieval warm period. Climate change happens all the time and it is not man that drives those climate changes back in history.”

“And it seems that notwithstanding the dramatic increases in man made CO2 emissions over the last decade, the world’s warming has stopped. Now admittedly we are still pretty warm by recent historical standards but there doesn’t appear to have been any appreciable warming since the late 1990s.” 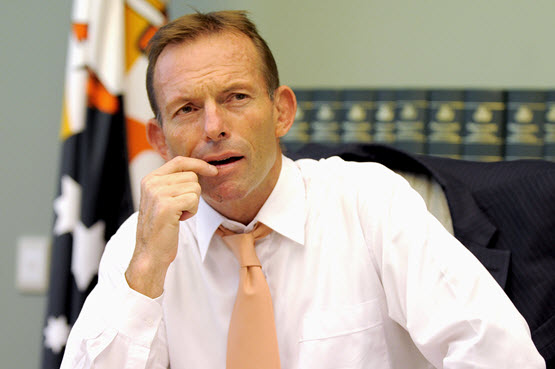 Tony Abbott in 2009, after becoming leader of the Liberal party

“There may even have been a slight decrease in global temperatures (the measurement data differs on this point) over the past decade despite continued large increases in emissions associated with the rapid economic growth of China and India.”

“We can’t conclusively say whether man-made carbon dioxide emissions are contributing to climate change. If they are, we don’t know whether they are exacerbating or counteracting what might otherwise be happening to global climate.”

“We should try to make as little difference as possible to the natural world. As well, prudent people take reasonable precautions against foreseeable contingencies. It’s the insurance principle.”

“Then there’s the evidence that higher concentrations of carbon dioxide (which is a plant food after all) are actually greening the planet and helping to lift agricultural yields.”

“There is much to be said for an emissions trading scheme. It was, after all, the mechanism for emission reduction ultimately chosen by the Howard government.” (2009)

“On the insurance principle you are prepared to take reasonable precautions against significant potential risks, and that’s I think why it makes sense to have an ETS.” (2009)

“If Australia is greatly to reduce its carbon emissions, the price of carbon intensive products should rise. The Coalition has always been instinctively cautious about new or increased taxes. That’s one of the reasons why the former government opted for an emissions trading scheme over a straight-forward carbon tax. Still, a new tax would be the intelligent skeptic’s way to deal with minimising emissions because it would be much easier than a property right to reduce or to abolish should the justification for it change.” (2009)

“What we need is environmental direct action – action which is actually going to make a difference. What we don’t need is a whopping new tax masquerading as an environmental measure.”

“The difference between Australia and a lot of other countries quite frankly, is when we make commitments to reduce emissions we keep them. Other countries make all these airy fairy promises that in the end never come to anything.” 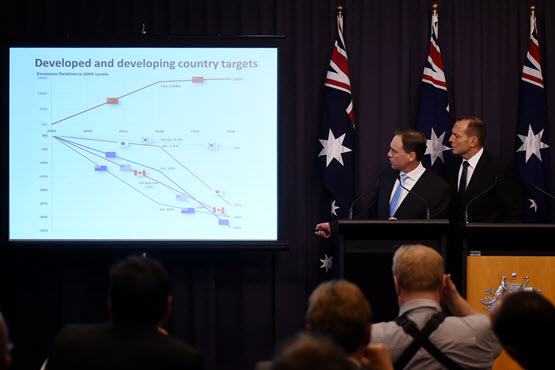 Then PM Abbott and former environment minister Greg Hunt announcing a carbon emissions reduction target of at least 26% by 2030.

The Paris agreement is “aspirational only, it is not binding, it is not mandatory”.

“Our first big fight this year must be to stop any further mandatory use of renewable power.”

Climate change is bunk: Ray Evans tells us why

Yawn!! The man has nothing to offer . . . the media’s responsibility is to stop resurrecting him.

Yes, why is he relevant to public affairs? That isn’t a rhetorical question. Why does the news media report everything he says?

Spot on, he is irrelevant other than being a spoiler in the Party. Stop giving him oxygen.

I despair. My year 4 kids no CO2 has weight. In nearly fifty years of watching politics, I have never seen such a collection of F*wits in charge of the nation. I do wonder if Abbott is becoming unhinged, though I know he is a clown.

Unless any of the above Abbott quotes were “carefully prepared, scripted remarks” they should not be taken as “gospel truth”. That’s how Abbott cautioned Kerry O’Brien on ABC’s 7.30 Report back in 2010.

It’s nigh impossible for anybody in our sunburnt nation to assess which of Abbott’s increasingly bizarre reflections might fall into that category. Ergo Abbott is best ignored.

That’s brilliant. Even Tony agrees that nothing he says makes sense.