The government is in terrible trouble in Queensland and Western Australia. So you'll never guess who would be one of the biggest losers from a reallocation of the GST to the west ...

The Productivity Commission’s examination of the the means for divvying up GST revenue, and the underlying principle of “horizontal fiscal equalisation“, was always going to be a delaying mechanism for the government, and not a solution for what, from the Coalition’s point of view, is a Gordian fiscal knot.

The West Australians have been jacking up for years about how their mining royalties have meant they get less GST than the other states under the arcane funding calculations employed by the Commonwealth Grants Commission. They have a point, even if they oddly didn’t complain too much when the same calculations delivered them additional funding before the mining boom. The other states, though, think the West Australians can get stuffed. Especially the small mendicant states like Tasmania and South Australia, which lack the economic and demographic size to provide services with the same efficiency as bigger states.

Referring the matter to the commission will give the government the cover of Australia’s most independent, economically rational think tank, but in the absence of commission chair Peter Harris discovering a magic pudding, even the most elegant policy mechanism for distribution that the commission can devise won’t resolve the tensions between the states. The draft report, issued by the Productivity Commission yesterday, contains options for adjusting the equalisation calculation that would deliver over $3 billion more revenue to Western Australian, taken from everyone else. The WA government, unfussed that it was only a draft, immediately called for the federal government to implement it.

To complicate things, the government is, at the moment, looking at electoral oblivion from opposite ends of the country. If we apply the state-based polling results from Newspoll this week, Queensland and WA loom as the biggest hurdles to re-election. In Queensland, the government is looking at a disastrous eight-point two-party preferred turnaround from the election, off a 10-point fall in the LNP’s primary vote, nearly half of which has gone to Labor and the rest to One Nation. While One Nation preferences will prove crucial, Newspoll’s 2PP result suggests the government is looking at losing at least eight seats, including Immigration Minister Peter Dutton’s, and up to 10 (one of the reasons why Labor and Bill Shorten are busting a gut in the Sunshine State, especially in regional and northern Queensland).

The other state that’s horrendous for the government, however, is the west: Labor is more than seven points ahead of its election position in 2PP terms, off a near-10 point fall in the Coalition’s primary vote, nearly all of which has gone to Labor. Translated into a theoretical uniform state-wide swing, that means five seats lost in Western Australia, including ministers Wyatt, Porter and Keenan. Apply the same uniform state-wide swings from those numbers and the government also loses three seats in New South Wales and one in Victoria — and who knows what might happen in South Australia with Grey on a knife-edge with the Nick Xenophon Team.

Any attempt to seek absolution from West Australian voters over the GST, though, is bound to offend voters in the eastern states. And wouldn’t you know it, one of the two approaches suggested by the commission, “equalisation to the average” makes Queensland the biggest loser in the shift of funding to the west — it would lose nearly $1.6 billion next year if that was applied, nearly twice as much as the next biggest loser, Victoria. But there is “equalisation to the second strongest State”, under which Queensland is only the third-biggest loser, with a mere $729 million shifting from Queensland coffers across the Nullarbor … 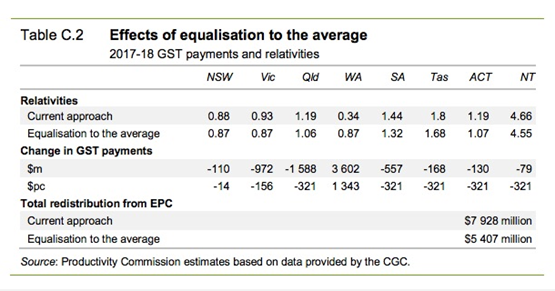 Don’t expect Bill Shorten to be endorsing either of those anytime soon.

This week, we’re discounting our annual gift memberships by $50 — usually $199, now $149 — because now more than ever we need your support. Just use the promocode SUPPORT when you purchase a gift membership.