University 'urgent' investigation...Malcolm Roberts helps you budget ... The left's war in the inner-North ...

Malcolm Roberts has cost of living answers. Governments and political parties love a summit — and now One Nation’s Malcolm Roberts is having his own “Cost of Living Summit“, and the list of speakers will make you consider shelling out the $20 cover charge (a decent price point considering the theme). To be held this Friday (the 13th, but we’re sure we shouldn’t read anything ominous into that), there’s usual subjects Mark Latham, Ross Cameron and Alan Moran, but we feel bad for The Australian‘s Adam Creighton — Roberts calls him Alan on the website. From what we can surmise, we gather the main issue in cost of living pressure is going to be tax, followed by the environment, the website says:

“Pauline Hanson’s One Nation party are bringing together experts in tax, energy, regulation and money who will highlight the key issues driving our high cost-of-living pressures in Australia.

Our cost-of-living summit will demonstrate how excessive government interventions have created a mess in the energy market resulting in our unaffordable power prices, and how we can remove these drivers of high costs to create a fairer and more affordable future.” 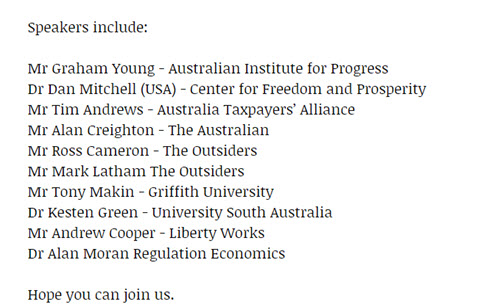 Uni backtrack.  The University of Melbourne is investigating how their ad campaign has ended up on extreme right wing U.S. website Breitbart, run by former Trump staffer Steve Bannon. 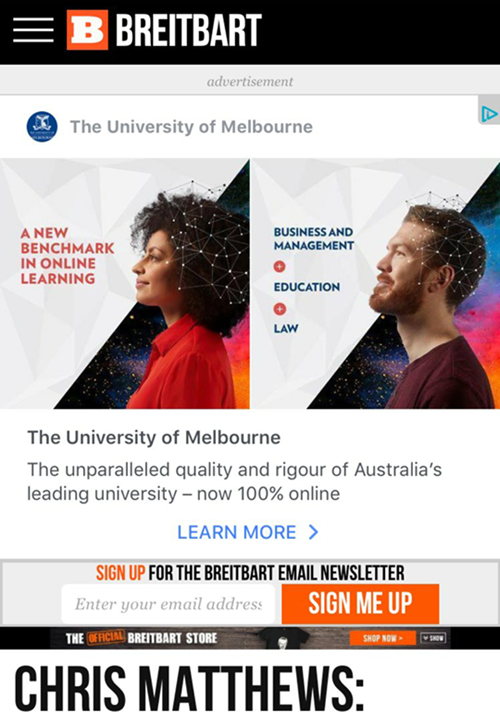 The advertisement was captured by a Twitter user and comes just after Melbourne University was ranked seventh top university in the world, defeating Harvard for the spot. Crikey contacted Melbourne Uni to clarify how this had happened and whether the advertising was still on Breitbart.

The absence of Reason in Northcote. The lefties of Melbourne’s inner-North are going to war in the byelection for the seat of Northcote, left vacant after the death of minister Fiona Richardson at the age of 50 in August. Labor’s candidate to hold onto the seat is Clare Burns, a Trades Hall organiser, and the Greens will be represented by Lidia Thorpe. The Liberals aren’t running a candidate in the seat, which is seen as winnable by the Greens, who are hoping to add to their lower house seats in the Victorian parliament. In The Age today it was announced that daughter of Don Chipp, Laura Chipp will be running “as a Reason party-endorsed candidate”, posing with Reason Party leader Fiona Patten. The only issue is, the Reason Party (the new name for the Sex Party) doesn’t yet exist in Victoria — the Victorian Electoral Commission pauses registering new parties after the writs have been issued for an election or byelection. So voters will see Chipp’s name on the ballot paper, but unlike the flyers and pamphlets, it will read “independent” not “Reason Party”.

Flying heap of crap watch. Despite a concerted PR offensive in recent months to portray the F-35 as rolling out seamlessly in western air forces, the highly problematic nature of the plane can’t be wished away. The outgoing head of the Pentagon’s operational testing division has savaged the plane’s massive list on unresolved problems in his final report. According to Dr Michael Gilmore, despite plans to ditch developmental testing and move straight to operational testing, major problems remain: “even with this risky, schedule-driven approach, multiple problems and delays make it clear that the program will not be able to start IOT&E (the first stage of operational testing) with full combat capability until late CY18 or early CY19, at the soonest.” Gilmore’s lengthy report itemises pretty much every current flaw in the F-35 program, and disturbingly reveals that ongoing flight testing is revealing more flaws, including, but not limited to, the aircraft carrier launch model that Australia isn’t getting:

“Flight sciences testing continues to be a source of significant discovery, another indication that the program is not nearing completion of development and readiness for IOT&E.

For example:
“Fatigue and migration of the attachment bushing in the joint between the vertical tail and the aircraft structure are occurring much earlier than planned…”
“Excessive and premature wear on the hook point of the arresting gear on the F-35A, occuring [sic] as soon as after only one use…”
“Higher than predicted air flow temperatures were measured in the engine nacelle bay [which may need testers to] determine if airspeed restrictions will be needed”
Vertical oscillations during F-35C catapult launches were reported by pilots as excessive, violent, and therefore a safety concern during this critical phase of flight…”

But long-term Flying Heap of Crap Watch readers will be delighted to hear that the problems with the ejection system, which would have killed lighter pilots, and the very heavy helmet, which would have snapped their spines, have mostly been remedied. This was partly done by taking a visor off the high-tech helmet the pilots have to wear. This led to another problem.

“Part of the weight reduction to the Gen III Lite HMDS involved removing one of the two installed visors (one dark, one clear). As a result, pilots that will need to use both visors during a mission (e.g., during transitions from daytime to nighttime) will have to store the second visor in the cockpit. However, there currently is not enough storage space in the cockpit for the spare visor, so the program is working a solution to address this problem.”

They can’t find room for a compartment for your sunnies?!

So selling off the govt owned assets, and de-regulating the market didn’t create the mess in the energy market, nosirrreee, it was their continued excessive govt intervention.

FMD, no amount of rational thought or clear evidence is enough for these dunces. What excessive government intervention are they talking about I wonder – not allowing gas and coal companies to rape and pillage every surface of the earth without any consultation with the owners of that land, or those who may want to use it after the gas is gone? Is that the government intervention they are talking about?

If they are so definite about what their summit will ‘demonstrate’, then what is the point of the summit? Why don’t they just cut to the chase and issue a statement of their views? – it would save a fair bit of time and money.
I can’t agree with your character assessment at the end of your comment, Doggy. Arseholes serve an essential function, whereas Roberts is as useful as the proverbial.

That list of speakers is a perfect example of the robust & rabid Right.
Shudder…

could malcolm be contemplating a snap poll off the back of shortens announcement of cuts to the franking credits, we have just been phone polled in the new england electorate, obviously a liberal inspired poll to test the waters, if the next news poll shows a swing back to the coalition I`m sure malcolm will take the gamble and rush off to see the governor general , this might just be shortens shot in the foot moment

Talcum gamble? Such a decision would require political nouse & courage, neither of which he has ever shown.