Nick Xenophon stands poised to unleash his full powers of disruption at the South Australian election in March.

If everything goes according to plan for Australia’s two most prominent political outsiders, looming elections in Queensland and South Australia could stand as joint watersheds in the decline of Australia’s two-party hegemony.

The spectre of One Nation matching or even exceeding its 11-seat haul continues to hang over state politics in Queensland, where the most recent poll had the party’s primary vote support nudging 20%, despite its ongoing internal management issues.

Now Nick Xenophon stands poised to unleash his full powers of disruption at the South Australian election in March, after announcing on Friday that he will leave the Senate to take on the eastern Adelaide seat of Hartley for his SA Best party.

Xenophon flatly rejects the notion that his ambitions extend to breaking the major parties’ lock on executive leadership positions, but such is the scale of the gamble he’s undertaking that it’s hard to believe the thought hasn’t at least crossed his mind.

Hartley is anything but a soft option for Xenophon, being a Liberal-held marginal seat that voted for his party in numbers only slightly above the state average at last year’s federal election.

Far easier pickings are available in the seats that correspond with the party’s House of Representatives prize of Mayo, where three Liberal incumbents have obligingly opted to retire.

In taking on what federal voting patterns suggest to be only his 13th strongest seat, Xenophon is signalling just how far his ambitions extend beyond consolidating the party’s existing presence in the Adelaide Hills.

[Xenophon state shift will shake up politics in the rustbelt]

It’s also telling that he should look to claim a seat from the Liberals, whose hopes for a blowout win present the biggest threat to his designs on the parliamentary balance of power.

As illustrated by the table below, listing the party’s 10 strongest state seats based on federal election voting, it’s primarily in conservative areas where Xenophon poses the greatest threat, notwithstanding that the geographic and socio-economic spread of his support is considerably more even than Pauline Hanson’s. 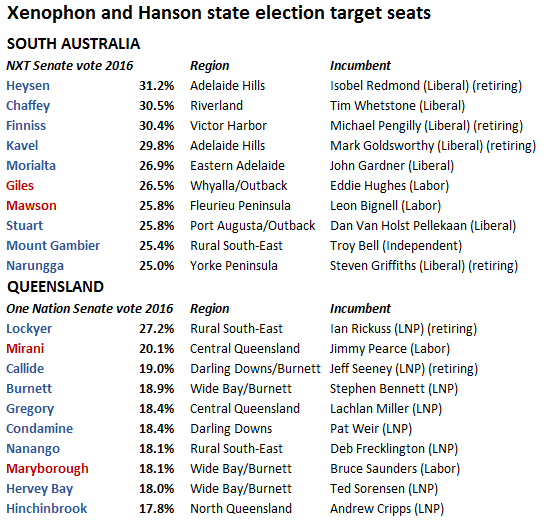 The Liberals’ challenge is to ensure it can compensate for losses to SA Best with gains from Labor — and here they stand to benefit from a conspicuously favourable electoral redistribution, along with the extra baggage Labor has accrued through another four years in office (most notably the power crisis and a series of failures and scandals in the health sector).

Nonetheless, party strategists cited by Phillip Coorey on the ABC’s Insiders yesterday are less than confident, with internal polling said to show SA Best on track to win “12 to 20 seats” — which, at the higher end, could make them the largest party in the state’s 47-seat lower house.

Failing that, a balance of power position could theoretically be leveraged into a demand that Xenophon emerge at the head of a coalition government.

Should either outcome transpire in Australia’s principal “rustbelt” state, the think pieces will write themselves.

If the evident craving of voters the world over to try new things isn’t auspicious enough, there are myriad local factors to fuel Xenophon’s optimism.

By the time the election is held, Labor will have been in power for 16 years — a longevity matched in Australia’s recent history only by the last Labor government in New South Wales, which ended its tenure with the devastating defeat of 2011.

This is the result not so much of popular enthusiasm for the Mike Rann-Jay Weatherill regime, as of a broken electoral system and a failure of conservative politics in the state.

Only one of Labor’s four successive wins — its first re-election in 2006 — was achieved with a majority of the two-party preferred vote.

The party initially came to power in 2002 by the grace of a turncoat conservative independent, the recently deceased Peter Lewis, and its 2010 and 2014 victories were owed to the wastage of Liberal electoral support in a small number of ultra-safe rural seats.

While the Liberals’ sense of grievance over the 2014 result is well founded, their failure to drive home the advantage decisively reflects brand damage from the party’s federal operation, which has made itself unpopular locally through its handling of the local submarine and automotive industries, and tepid public enthusiasm for its state leadership.

[The many publicity stunts of Nick Xenophon]

Steven Marshall continues to lead the SA Liberals despite his electoral failure four years ago, but he has only ever had weak-to-middling poll ratings — a notable contrast with Western Australia Premier Mark McGowan, who dominated then-premier Colin Barnett in leadership polling long before leading Labor to its landslide win in March.

If Australia’s major parties chose their leaders using an American-style primary system, or a wide-ranging ballot of party supporters of the kind used by Labour in the UK, it’s a safe bet that the prevailing mood for change would have been met by a maverick outsider emerging through the major party system.

Instead, the major parties appeared set on offering voters the last thing in the world they would have wanted: a rematch of a Weatherill-versus-Marshall bout that was quite uninspiring enough when it played out the first time around in 2014.

Now they stand to experience a state election unlike any ever before seen, with the promise of such spectacles as a three-way leaders’ debate dominated by the novelty of Xenophon’s participation.

The next challenge for Xenophon is to assure voters that his motley aggregation of state election candidates — one of whom was unceremoniously dumped on the weekend over an offensive Facebook post — will be ready to assume whatever responsibilities their leader may be able to negotiate them into after the election.

The one question Xenophon must answer

It’s well past time to have a wider choice of major parties. The current 2 party system seems broken – look at the US in this context.
Governments that need the support of a coalition (not counting the Nationals Rump) need to work smarter and harder.

The 2-Party system had served us reasonably well compared to many other countries, until this present LNP rabble seized power federally and contaminated the entire system with a stench that will take decades to clear.
Sadly NSW Labor added to the stench with the odious antics of Obeid, Macdonald and their ugly henchmen – that stench will take decades to clear as well…

Leon, I know the federal LNP are a “rabble” but you could hardly say they “seized power”. More likely they picked up the steaming pile that Rudd/Gillard/Rudd had dumped. And if the same LNP rabble win the Queensland state election soon that will hardly be because they are predictable. The next state election is an out of control circus. Queensland Labor is trying to wrangle coal, the Greens, death of the GBR and Pauline Hanson like a mob of three-legged cats. They don’t have any choice and they could easily stuff it up. Chaos is likely but it will be what we voted for. Don’t you love it?

Is Chaos better or worse than Stagnation, do you think? Three or more parties will tend to force compromise.

Sadly it has often been found that people prefer stability to freedom.

Any evidence that the duopoly has ‘erved us well” Compared to what?
All of northern Europe has had stable, successful & intelligent government since the end of WWII – we should be so lucky.
Lest anyone needs a reminder of what happens when a government controls both houses, I give you Rattus Mendacious after 2004, SerfChoiceless, pissing away the boom on middle class bribes and a host of other joys.

Whyalla? I thought that was wiped off the map by the carbon tax!

Qld, 20% for one nation, what is going on up there, are they kidding me? If Pauline Hanson is the answer, you are definitely asking the wrong question.

Any good out of this could be if they, NXT and PHON, changed the system to give the number of seats based on their overall vote count, a la MMP or the federal senate count, in which case majority government will be a thing of the past, with the Nationals to follow soon after, so there could be some good in it.

Then on to federal parliament to do the same. What a godawful mess.

Thanks for the quote marks around “rustbelt”. Headline on Keane’s yarn last week didn’t have them.

As a “yellow dog” Labor supporter, if I were in a safe Liberal seat in SA at the time of the next State election, I would strategically vote for the X candidate, next preference Labor, putting the “Liberals” last, whatever Labor’s “how to vote” card said. I urge other Labor supporters whose vote is locked up in a safe “Liberal” seat to do likewise. Replacing “Liberals” with “X’ers” in seats where Labor can’t win had got to be better than letting the “Liberals” win. Whenever “Liberals” come to office, they immediately attack health, education and the vulnerable, flog off public assets to mates and work to oppose action on climate change.

“… they immediately attack health, education and the vulnerable, flog off public assets to mates and work to oppose action on climate change.”
Isn’t that what Xenophon has enabled the Coalition to do with a host of major pieces of legislation at federal level over the past few years? Supporting major tax cuts for the wealthiest is tantamount to supporting cuts to public health and education.